The EU market represents 447.5 million people, and has a total GDP of $15.29 trillion, as of 2020. The United States has 331 million people and a Gross Domestic Product of $20.95 trillion according to the World Bank, as of 2020. The European Union (EU) consists of 27 countries: Austria, Belgium, Bulgaria, Croatia, Cyprus, the Czech Republic, Denmark, Estonia, Finland, France, Germany, Greece, Hungary, Ireland, Italy, Latvia, Lithuania, Luxembourg, Malta, Netherlands, Poland, Portugal, Romania, Slovakia, Slovenia, Spain, and Sweden. The EU currently has 46 trade agreements with 78 countries. 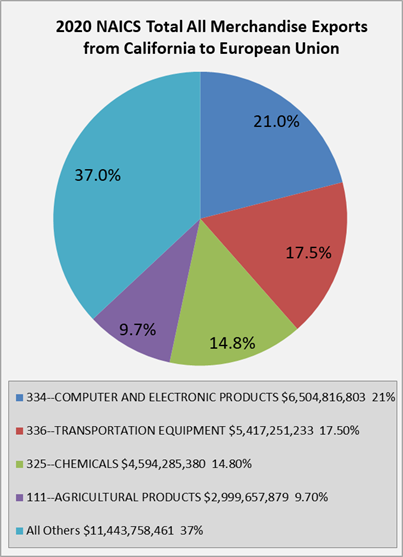 Total bilateral trade between the European Union and United States was over $1 trillion in 2021, with goods trade accounting for $762.14 billion, the United States exported $271.7 billion worth of goods to EU member nations. In 2018, 48 out of 50 U.S. States exporter more to Europe than to China.  Top U.S. exports to the EU were chemicals, transportation equipment, computer/electronic products, and oil and gas. Imports into the US from the EU totaled $490.44 billion in 2021.  Top imports from the EU to the U.S. were chemicals, transportation equipment, non-electrical machinery, reimports,  and computer and electronic products.

The U.S. and EU transatlantic economy support 16 million jobs, accounts for one third of world GDP, and 30% of world trade. 4.7 million jobs in the U.S. are directly supported by European companies in the U.S. (AmCham Europe Report). 14.8 million EU tourists traveled to the U.S. in 2015. The top five service exports from the US to the EU are: business services including Telecom, travel including passenger fares, royalties and licensing fees, financial services including insurance, and transport. The top five agricultural exports from the US to the EU are: tree nuts, soy beans, wine and beer, prepared food, and oils. The U.S. and EU are each other’s primary source and destination for foreign direct investment (FDI). The U.S. invested $3.6 trillion in the EU in 2018, representing 61% of total U.S. investment abroad, and the EU invested $3 trillion in the U.S., representing 68% of total FDI in the U.S.(AmCham Europe Report).

California exports to the EU were $27.4 billion in 2021. California is the second largest exporting state to the European Union, with computers and electronic products, chemicals,  agricultural products, and transportation equipment as our leading export sectors to the region. European Union countries purchase roughly 15 percent of all California exports. For California companies, the single market presents a stable market with huge opportunity. Imports from the EU to California totaled $33.29 billion and consisted of $9.1 billion in transportation equipment followed by computer products, non-electrical machinery, and  chemicals.

Joint Communication To The European Parliament, The European Council and The Council: A New EU-US Agenda for Global Change
European Commission, December 2, 2020

The guiding principles of a new transatlantic agenda

Working together on technology, trade and standards

The United States is the most important export market for European cars, accounting for 29 percent of the value of all exported cars from the EU. By comparison, US-based companies are delivering 19 percent of their car export value to Europe. European car manufacturers, such as Volkswagen and BMW, contribute to this number by exporting more than 50 percent of the cars they produce in the United States. Almost six percent of the EU’s working population is employed in the car sector. On the other side of the Atlantic, the German car companies BMW, Mercedes, and Volkswagen have created almost 120,000 jobs by building manufacturing plants across the southern United States.

European Commission Welcomes Parliament’s Support of Trade Deal with Canada
February 15, 2017
The European Parliament (EP) voted in favour of the EU-Canada Comprehensive Economic Trade Agreement (CETA). Members of the EP cast 408 votes for and 254 votes against. As the consent vote is positive, the EU will now proceed with the provisional application of the agreement that should take place by April 1st, and possibly even sooner.

EU countries sent roughly 2 million tourists to California in 2010, stimulating the Californian economy. Of all 28 countries, the British, Germans, French, and Italians came in the largest quantities.
(California Tourism and Travel Commission)

Croatia becomes 43rd member of the Government Procurement Agreement as it joins the EU
WTO, June 27, 2013

Embassy Releases T-TIP ‘Call to Action’ Report
American Chamber of Commerce in Denmark, April 8, 2015
Multinational Enterprises – How important are they for the Danish Economy?AmCham Denmark, May 09, 2011

The EU Made Simple

The EU Made Simple

The EU is one of the major players in international trade, regulatory standards, environmental policy and global security and defence. Therefore understanding the EU institutions, their processes, the key players and how decisions are made is key to business success in Europe. AmCham EU has recently published the third edition of The EU Made Simple which includes all the structural and other changes to EU governance since the implementation of the Lisbon Treaty this year.

The book is an ideal tool for those just beginning in EU Affairs, or for those more experienced practitioners by presenting all material in an easy to follow format. This publication is available to members of CalChamber at the AmCham EU member discounted rate of €15.

You can visit www.amchameu.eu/publications to find out more about this publication and the others offered by AmCham EU.

(April 25, 2019)  Brexit is the latest phenomenon in the western world presently characterized by shock and schism, a leading scholar explained yesterday at the California Chamber of Commerce.

“Brexit is the most profound crisis that Europe has had since the end of the Second World War,” Dr. Matt Beech, senior fellow at the Institute of European Studies at the University of California, Berkeley, told nearly 100 guests at the CalChamber International Luncheon Forum. The luncheon was sponsored by Suburban Water Systems, a CalChamber member.

Dr. Beech provided attendees with an analysis of the potential implications for the United States and specifically, trade in California, with Britain’s potential withdrawal from the European Union.

(June 11, 2012) Economic relations between France and California were the subject of the day when the Ambassador of France called on the California Chamber of Commerce in Sacramento. During his trip to Northern California, Ambassador François Delattre focused on innovation and entrepreneurship with visits to Berkeley and the Bay Area.Regarding the European Union, the Ambassador cited economic restraint, promoting growth, and improved governance as key priorities for the near future. 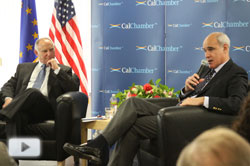 (March 10, 2011) E.U. Ambassador to the United States João Vale de Almeida presented his perspectives on E.U. relations with the U.S. in response to questions from CalChamber President and CEO Allan Zaremberg and other audience members at the CalChamber-hosted International Luncheon Forum. video

(June 28, 2007) The California Chamber of Commerce this week hosted His Excellency John Bruton, European Union Ambassador and Head of Delegation of the European Commission to the United States, at an international dinner forum and discussed ways to improve trade and business relations between Europe, the United States and California. 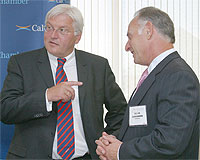 (August 31, 2007) The California Chamber of Commerce hosted the Honorable Frank-Walter Steinmeier, Minister for Foreign Affairs of Germany yesterday, for an international luncheon to discuss climate and energy policy.

More than 80 guests attended the working luncheon on August 30 and greeted Minister Steinmeier. Among the attendees were California and German government officials and business people from California and Germany, including representatives of transportation, manufacturing and technology. 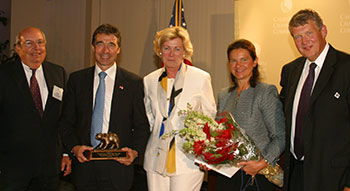 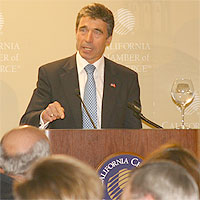 (June 13, 2006) The California Chamber of Commerce hosted His Excellency Anders Fogh Rasmussen, Prime Minister of Denmark, at an international trade dinner yesterday to discuss how research and businesses interact to play a valuable role in promoting bilateral trade between California and Denmark.