Denmark is connected by bridge to southern Sweden and shares a southern border with Germany. Slightly smaller than Vermont and New Hampshire combined, it has a population of 5.8 million people and GDP of $356 billion (2020). The constitutional monarchy has been has been a member of the European Union (EU) since 1973.

Denmark is a rich, modern society with state-of-the-art infrastructure and distribution systems, a highly skilled labor force and a central location that makes it an excellent distribution point for the Scandinavian, Northern European and Baltic markets. Denmark is a firm advocate of liberal trade and investment policies and actively encourages foreign investment. There are more than 400 American subsidiaries established in Denmark and a strong American Chamber of Commerce with approximately 265 members.

Political and commercial relations with the United States are excellent. The United States is Denmark’s largest trading partner outside Europe, with about a 11.1% share of total Danish trade in goods in 2019. In 2021 the United States exported $3.5 billion to Denmark. Top exports were oil and gas ($784 million), chemicals ($739 million), computer and electrical products ($456 million), and machinery, except electrical ($208 million). In the same year, the U.S also imported $12.1 billion from Denmark, top imports included chemicals ($7.3 billion), machinery except electrical ($1.2 billion), computer and electrical products ($880 million), and processed foods ($584 million).

U.S. direct investment to Denmark was $9.87 billion in 2020. In the same year Danish investments to the U.S. totaled $31.49 billion. Denmark was the seventh fastest growing source of FDI in the U.S. in 2020. Danish FDI in the US supported 40,000 jobs and contributed $731 million to research and development; as well as, $1.4 billion to expanding US exports. The top industry sectors for Danish FDI into the US were: software and IT services, industrial equipment, renewable energy, transportation, pharmaceuticals, and business services. Select USA

Denmark’s Numbers: The Transatlantic Economy 2021: Annual Survey of Jobs, Trade and Investment between the U.S. and Europe
AmCham Denmark, March 24, 2021

Multinational Enterprises – How important are they for the Danish Economy?
AmCham Denmark, May 09, 2011

On Sunday, April 3, 2016, the Danish-American Chamber of Commerce hosted the First Danish American Frontier Award Dinner at the Mark Hopkins Hotel in San Francisco with approximately 300 Danish-American Business leaders attending. Ulla Tørnæs, Danish Minister of Science and Higher Education presented the winner of the Danish American Frontier Award during the gala event to Jorgen Vig Knustorp, CEO and President of the Lego Group. Based on the iconic Lego brick, the company is one of the world’s leading manufacturer of play materials.

The DAF Award is presented to a person or group of persons who have distinguished themselves by their actions, exploration or presence in areas of leadership, business, commerce, service, science, technology, invention, arts or humanitarian ventures. The recipient will have exhibited daring curiosity in their pursuits, often standing alone in their convictions, while maintaining integrity throughout their enterprise.

The DAF Award celebrates the pioneer spirit with which Danish-Americans have explored, and are still exploring the boundaries of themselves, their enterprise and their world today and actively shape the world of the future.

The recipient is honored with a statuette by the Danish-American sculptor, Dennis Smith, depicting Peter Lassen, the most important of early Danish-American pioneers and frontiersmen. The statuette is handmade and numbered exclusively for recipients of the award.

Peter Lassen was born in Farum, Denmark on October 31, 1800, and while he did not arrive in America until he was 30, the early days of California’s history would become closely linked to Peter Lassen as a legendary pioneer, as an explorer of the wild country, trailblazer and as settlor and cultivator.

He was a restless entrepreneur. He built the first saw-mill in California. He mapped the earliest trails and helped immigrants into California where he build several communities and helped pave the way to what would become San Francisco. Among Peter Lassen’s friends were Johan Sutter, John Bidwell, and Kit Carson, but he befriended all people and everyone regardless of stature, color or creed were welcome in his home. The Indians called him Uncle Peter and that was his preferred title.

He was a generous helpful man to all he encountered, but he loved the magnificent nature of California the most, and his last day, the 26th of April 1849, he was killed while exploring northern California. A few decades later John Muir would come to California and profoundly shape our understanding of our natural wonders.

To this day, the largest land area named after a Dane outside of Denmark is named after Peter Lassen. The Lassen County, Lassen National Volcanic Park and Lassen Peak (Mount Lassen, the largest plug dome volcano in the world) stand as monuments to this first California Naturalist. 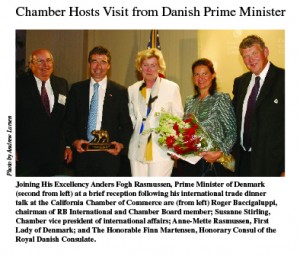