Greece is in Southern Europe and borders the Mediterranean Sea. Greece is classified as a high-income country; however, Greece’s economy is recovering from a recession caused by the global financial crisis. Greece has a population of 10.7 million people and a gross domestic product (GDP) of approximately $209.8 billion. Greece has a diverse economy that benefits from a large public sector. Tourism in Greece accounts for 18% of GDP. Greece also benefits from their membership in the European Union. The majority of Greece’s trading partners are in the EU and 3.3% of Greece’s GDP is from EU aid. World Bank, CIA 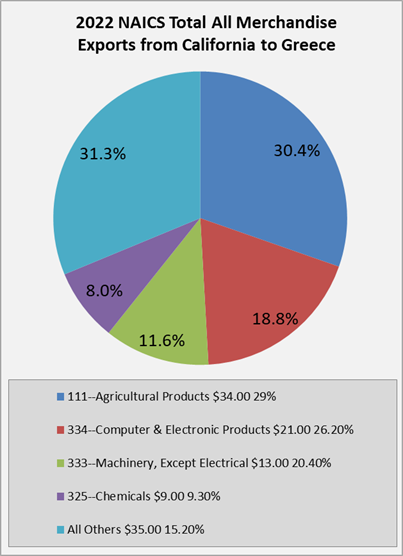 fabricated metals, which made up 10.4% of total imports into the US from Greece and had a value of $135.45 million. US Department of Commerce

In 2019 Greece invested $1.12 billion into the US. Conversely, in 2019 the US invested $938 million into Greece. Greek FDI in the US supported 3,700 jobs, $5 million in research and development, and $8 million of expanded US exports. The top industry sectors for Greek FDI were: software and IT services, food and beverages, renewable energy, electronic components, real estate, and textiles. Select USA

In the United States, California is a top exporting state to Greece. California exported $141 million worth of goods in 2020. $40.8 million was agricultural products and $36.9 million was computer/electronic products. Other prominent exports from California to Greece included chemicals and waste and scrap. California is also a top importing state of products from Greece. In 2020, California imported $126.39 million of goods from Greece. 71.9% of those goods from Greece were food manufactures which retained a value of nearly $90.8 million. The remaining imports included nonmetallic mineral products, agricultural products, and fabricated metals. US Department of Commerce

Greece is one of the nations that is currently involved in negotiations for the Transatlantic Trade and Investment Partnership (TTIP) with the rest of the European Union and the United States. The United States and the European Union have a strong bilateral trade relationship totaling $698.7 billion in 2015. A free trade agreement, such as TTIP, desires to strengthen that relationship by eliminating tariffs, aligning compatible regulations to open trade, and furthering trade in the service sector.