California is one of the 10 largest economies in the world with a gross state product of $3 trillion. International trade and investment are major parts of our economic engine that broadly benefit businesses, communities, consumers and state government.  California’s economy is diverse, and the state’s prosperity is tied to exports and imports of both goods and services by California-based companies, to exports and imports through California’s transportation gateways, and to movement of human and capital resources.

Although trade is a nationally determined policy issue, its impact on California is immense. In 2021, California exported to 226 foreign markets. Trade offers the opportunity to expand the role of California’s exports. In its broadest terms, trade can literally feed the world and raise the living standards of those around us.

According to the United Nations, global trade hit a record high of $28.5 trillion in 2021. However, trade is expected to slow in 2022 due to macroeconomic trends. Ongoing inflation in the U.S., concerns in China’s real estate sector, and persistent supply chain disruptions are expected to effect global trade in 2022.

In October 2022, the World Trade Organization forecasted world trade to lose momentum in the second half of 2022 and remain subdued in 2023 due to multiple shocks as import demand is expected to soften while Europe deals with high energy prices from the Russia-Ukraine war, monetary policy tightens in the U.S., China continues with its Zero Covic policy, and the threat of food insecurity and debt plagues developing countries.

The WTO predicts the Middle East will have the strongest trade volume growth of any region in 2022 on both the export side (14.6%) and the import side (11.1%). Africa has also shown resilient trade growth. Global energy prices rose 78% year-on-year in August while food prices were up 11%, grain prices were up 15% and fertilizer prices were up 60%. Food prices have also risen sharply as Ukraine is a major exporter for fertilizer and grains.

Risks to the WTO forecast include banks raising interest rates while aiming to tamp down inflation, but they could overshoot and trigger a recession, which would affect imports. Escalation of the Russia-Ukraine war could also destabilize the global economy. The WTO also notes the underappreciated risk of decoupling of major economies from global supply chains which would exacerbate supply shortages in the near term and reduce productivity over the longer term.

In April 2022, the World Trade Organization projected that global trade growth in 2022 could be cut almost in half from the 4.7% the WTO forecasted last October to between 2.4% and 3%.

While the shares of Russia and Ukraine in overall world trade and output are relatively small, they are important suppliers of essential products, notably food and energy. Both countries supplied around 25% of wheat, 15% of barley and 45% of sunflower product exports in 2019. Russia alone accounted for 9.4% of world trade in fuels, including a 20% share in natural gas exports.

Russia and Ukraine are also key providers of inputs into industrial value chains. Russia is one of the main suppliers globally of palladium and rhodium, key inputs in the production of catalytic converters for automobiles, supplying 26% of global import demand for palladium in 2019. Semiconductor production depends to a substantial extent on neon supplied by Ukraine. Disruptions in the supply of these inputs could hit car producers at a time when the industry is just recovering from a shortage of semiconductors, the report highlights.

The United States is the world’s largest economy with a GDP of $23.99 trillion, according to the Bureau of Economic Analysis. The population of the U.S. is approximately 331.89 million as of December 2021. Since Census Day (April 1) 2020 the population has grown by 0.13% to the December 2021 total. 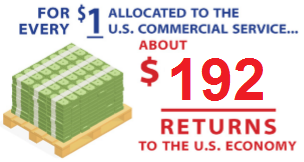 For every $1 appropriated to U.S. Commercial Service in Fiscal Year 2016, an estimated $192 was returned to the American economy in the form of increased exports ($56.2 billion) and foreign direct investment ($5.3 billion), which supported approximately 300,000 U.S. jobs.

From 2010 to 2016, U.S. Commercial Service assistance played a significant role in helping U.S. companies and localities achieve over $300 billion in U.S. exports and over $23 billion in foreign direct investment – supporting an estimated 1.7 million American jobs.

Statistics released in August 2021 showed that majority owned U.S. affiliates (MOUSAs) of foreign multinational enterprises employed 7.95 million workers in the U.S. in 2019, which is a 1.1% increase from 2018. Majority owned U.S. affiliates accounted for 6% of total private-industry employment in the U.S. Employment by MOUSAs was largest in the manufacturing and retail trade sectors. MOUSAs with ultimate beneficial owners in the United Kingdom, Japan, and Canada were the largest contributors to total MOUSA employment. (Bureau of Economic Analysis)

For more info on international trade in goods and service.
Source: Bureau of Economic Analysis

In 2019 new foreign direct investment into California total expenditures reached $45.49 billion. Employment by newly acquired, established, or expanded foreign-owned businesses in 2019 reached 44,300 employees (Bureau of Economic Analysis). The top industry sectors for FDI in California were software & IT services, business services, communications, financial services, and industrial equipment. The top sources of FDI in California were made up of 20% from the United Kingdom, 9% from Germany, 8% from Canada, 7% from Japan, and 7% from China. (Select USA)

California is a top exporter in the nation of computers, non-electrical machinery, chemicals, transportation equipment, and agricultural products. Computers and electronic products are California’s top export, accounting for 22.6% of all the state’s exports in 2021.

According to a study by the Consumer Technology Association, in 2017 California  had over three million jobs directly and indirectly attributable to consumer tech,  many of which derive from consumer tech exports.

Other top categories included non-electrical machinery and chemicals making up 11.6% and 10% of total exports, respectively

Computers and electronic products remained California’s largest exports, accounting for 26% of all California exports to Canada.

California is the second largest exporting state to Asia, after Texas. In 2021, California exported $76.48 billion in goods to the region.

California exports to Mainland China totaled $16.7 billion in 2021. Non-electrical machinery surpassed computers and electronic products as the largest export to China accounting for  for 22.8% of exports.

Exports to Hong Kong were $6.7 billion in 2021, an increase from $6.3 billion in 2020, maintaining the spot as California’s 8th largest export market.

California exports to Japan totaled $11.86 billion in 2021. Computers and electronic products accounted for 16.15% of total exports.

South Korea maintained the spot of California’s No. 5 trading partner as California exported $11.62 billion to South Korea in 2021. Over 32.3% was made up of non-electrical machinery.

California exports to the European Union (27) totaled $27.42 billion in 2021. California is a top exporting state to Europe.

Find the U.S. International Trade in Goods and Services Monthly Update from the Bureau of Economic Analysis here.

The Transatlantic Economy 2020: Annual Survey of Jobs, Trade and Investment Between the United States and Europe
Am Cham EU, March 2020

Is Globalization an Engine of Economic Development?
Our World Data, August 1, 2017