Luxembourg lies in between France and Germany in Western Europe. With a population of 619.896 people and a gross domestic product (GDP) of $71.1 billion, Luxembourg is classified as a high income country. Luxembourg’s economy is centered on its leading financial sector that accounts for over 35% of its GDP. Luxembourg has one of the highest GDP per capita in the world and is the highest in the Eurozone, which results in a prominent high standard of living. Some of Luxembourg’s main trading partners are Belgium and Germany; however, the United States is its fourth largest importer. World Bank, CIA

In 2020, the US exported $1.35 billion worth of goods and products to Luxembourg. Almost half of those exports was transportation equipment, which had a total value of $665 million. The US also exported $140.4 million of secondhand merchandise and $135.6 million of computer and electronic products. In the same year, the US imported $493 million of goods from Luxembourg. Reimports made up 25.8% of the total, followed by fabricated metals which made up just over 16.6% of the total. Another key imported category was primary metals, which accounted for 13.7% of the total, and plastics and rubber products, which accounted for 10.9% of total imports from Luxembourg into the US. US Department of Commerce 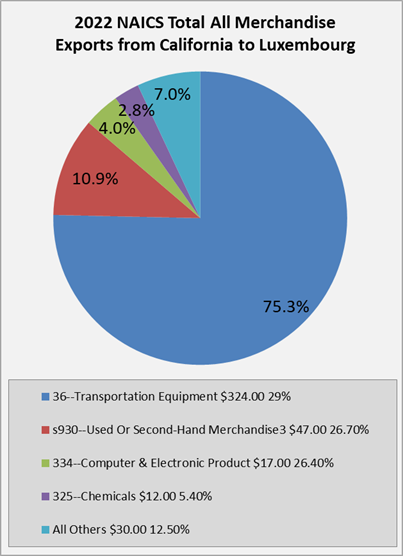 The United States and Luxembourg have healthy flows of investment across their borders. In 2019, the US had $766 billion in foreign direct investment (FDI) in Luxembourg. Additionally, Luxembourg had $22.8 billion of investment in the United States. Luxembourg FDI into the US supported 19,500 jobs and contributed $57 million to research and development, as well as another $174 million to expanded US exports. The top industry sectors for Luxembourg’s FDI were: metals, communications, software and IT services, plastics, business services, and industrial equipment. Select USA

California is one of the largest exporting states to Luxembourg in the US. California exported $131.79 million of goods to Luxembourg in 2020. The top export category from California to Luxembourg was used or second hand merchandise totaling $38 million and 29% of the total exports. Other exports from California were transportation equipment at 26.7%, computer products 26.4%, and non-electrical machinery at 5.4%. In 2020 California is the top ten importers of goods from Luxembourg, importing approximately $23.5 million worth of goods. Some of the major imports were reimports that accounted for $8 million and 33.9% of total imports into California from Luxembourg, followed by non-electrical machinery which made up 23.8% of the total. US Department of Commerce

In California, the sixteenth largest source of FDI through foreign-owned enterprises (FOEs) is Luxembourg. In 2020, FOEs from Luxembourg in California provided 9,364 jobs through 441 firms amounting to $636 million in wages. The top jobs by sector are: retail trade, professional/business services, leisure/hospitality, wholesale trade, and transportation/warehousing/utilities (World Trade Center Los Angeles FDI Report, May 2020).

Luxembourg is one of the nations that is currently involved in negotiations for the Transatlantic Trade and Investment Partnership (TTIP) with the rest of the European Union and the United States. The United States and the European Union have a strong bilateral trade relationship totaling $698.7 billion in 2015. A free trade agreement, such as TTIP, desires to strengthen that relationship by eliminating tariffs, aligning compatible regulations to open trade, and furthering trade in the service sector.