Ireland is a trade-dependent economy and one of the first twelve EU nations to begin circulating the euro in 2002. The nation has become an important European hub for key sectors such as biotech, technology, med-tech, and financial services. Ireland has a GDP of US$388.69 billion and a population of 4.94 million.

Ireland is home to a burgeoning business community which includes the software, pharma, finance, and medical technology industries. One out of every two hospital ventilators in the world is created in Ireland. Along with one in three of contact lenses and one in four products for diabetes patients around the world. 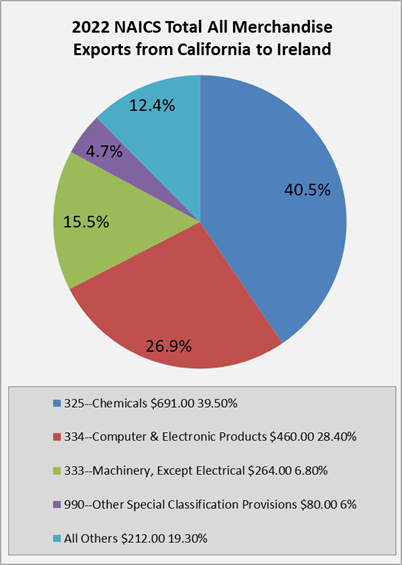 Economic and trade ties are an important facet of overall US-Irish relations. Two-way trade between the United States and Ireland totaled approximately $74.97 billion in 2020 In 2020, the US exported over $9.5 billion in goods to Ireland, a number that has generally increased over the previous years. Top exported products included chemicals,  computer and electronic products, manufactured commodities, and non-electrical machinery. The US imported $65.47 billion from Ireland in 2020, an increase from $61.89 billion in 2019, with chemicals making up 74.9% percent of the total. U.S. Department of Commerce

According to the Irish Consul General in San Francisco (February 2019), Irish companies employ approximately 100,000 Americans in the US, and of those about ten percent or 10,000 jobs are in California. Approximately 140 Irish companies now are established in the Western US, primarily in California. And CA-Irish ties run deep, with ten percent of the Bay Area identifying as Irish-Americans. Irish Consulate General

In 2020, California exported over $1.9 billion to Ireland, providing 20% of total US exports to Ireland, and making California one of the top exporting state to Ireland. Top exported products in 2020 included chemicals, miscellaneous manufactured commodities, computers/electronic products and reimports, accounting for 36.8%, 30.6%, 16.2%, and 6.4% of the total, respectively. Imports to California from Ireland in 2020 totaled $1.09 billion and were made up of 39.5% chemicals and 28.4% computer and electronic products. U.S. Department of Commerce

Ireland is the fourth fastest-growing source of FDI in the U.S. In 2019, US direct investment into Ireland reached $354.9 billion, while Ireland invested $343.5 billion into the US. The US is the largest export destination for Irish goods, and provides the second largest source of Irish imports, after the UK. There are over 200 Irish companies at over 2,600 locations in all 50 states across the US. Irish companies in the US employ as many people as US companies do in Ireland, which is about 336,400 people. $5.1 billion of Irish FDI went to research and development and another $11.1 billion went to expanding US exports. The top industry sectors for Irish FDI were: software and IT services, business services, industrial equipment, food and beverages, pharmaceuticals, and communications.  Select USA

In California, the seventh largest source of FDI through foreign-owned enterprises (FOEs) is Ireland. In 2020, Irish FOEs in California provided over 33,089 jobs through 477 firms amounting to $3.13 billion in wages. The top jobs by sector are: manufacturing, professional/business services, wholesale trade, other services, and construction (World Trade Center Los Angeles FDI Report, June 2021).

The newly formed California Legislative Irish Caucus is a bi-partisan group of state legislators of Irish ancestry.  The Caucus is a 501c7 organization intended to strengthen the important economic and cultural ties between California and Ireland.

Currently, there are more than 36,000 Irish nationals employed by California based corporations with household names such as Hewlett Packard, Apple, Intel, Google, Facebook, LinkedIn, PayPal, Allergan and Gilead. In addition, there are over 50 California-based companies with Irish founders.

U.S. companies have been investing heavily in Ireland since the 1970’s after its entry into the European Union, when it established itself as a new market.  Its close proximity to the continent, with an English speaking and educated workforce, along with new government incentives made it attractive for foreign investment.  In fact, there are now at least 190 West Coast companies with facilities throughout Ireland.  Ireland has become an important European hub for key sectors such as biotech, technology, med-tech, and financial services.

(March 19, 2019)  The strong trade and investment links between Ireland and the United States, as well as California, were celebrated last week at a California Chamber of Commerce breakfast held in conjunction with CalChamber Board events.

The CalChamber Council for International Trade meeting, sponsored by Frontier Communications, was one of several gatherings in the week leading up to St. Patrick’s Day featuring the release of the US-Ireland Business 2019 report by the American Chamber of Commerce (AmCham) Ireland.

Speaking at the March 15 breakfast were the Honorable Simon Harris, Irish minister for health and former minister of state; Carin Bryans, vice president of AmCham Ireland and managing director of JP Morgan Ireland; and Robert O’Driscoll, consul general of Ireland to the Pacific Northwest.

The three highlighted Ireland as a transatlantic hub and gateway to the European Union.

Remarks by President Trump at the Friends of Ireland Luncheon
White House, March 14, 2019

(March 16, 2016) Economic and trade ties are an important facet of overall U.S./California-Irish relations explained the Honorable Alan Kelly T.D., Irish Minister for the environment, community and local government, during an International luncheon yesterday at the California Chamber of Commerce.

In addition to celebrating St. Patrick ’s Day one day early, the luncheon with over 100 attendees also honored March as Irish-American Heritage Month, which was recently declared by U.S. President Barack Obama.

Luncheon guests also heard from Assemblymember William P. Brough (R-Dana Point) who chairs the California Legislative Irish Caucus, which now boasts the membership of 25% of the Legislature. The caucus will take part in a trip to Ireland in July. Assemblymember Brough promised that upon their return, participants will be “fully committed to new, stronger and even more meaningful ties.”