The CalChamber Council for International Trade expands California’s voice on trade. The council boosts the ability of California businesses and organizations to advocate sound international business policies by bringing together the two leading trade policy organizations in the state to form a single unified group of business leaders on international issues.

The CalChamber Council for International Trade is focused on sound policy. The council works with state and federal administrations and lawmakers to influence international business policies that support California’s global success, job creation and sustainability.

Leadership on these issues is more important than ever. With free trade as an important part of our national agenda, we are at a historic time to take action. California business and trade leadership on domestic and global issues remains a key in fostering California competitiveness.

The CalChamber, in keeping with long-standing policy, enthusiastically supports free trade worldwide, expansion of international trade and investment, fair and equitable market access for California products abroad, and elimination of disincentives that impede the international competitiveness of California business.

Former Chairs of the CalChamber International Trade Committee include:

The CalChamber recognizes that throughout its long history, CCIT has been a dedicated statewide coalition of California’s leading voices supporting free and open international trade policy. For more than a half of century, the CCIT has been the only statewide organization solely dedicated to advocating sound U.S. trade policy to open foreign markets for the benefit of West Coast producers of goods and services that need those markets to fuel jobs and economic growth.

(December 7, 2007) At the first meeting of the newly merged California Chamber of Commerce Council for International Trade are (from left:)

Levine was recognized for his many years of participation in and support for the CCIT. 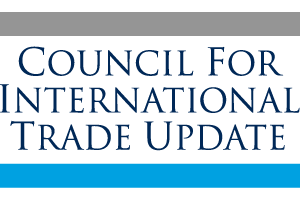 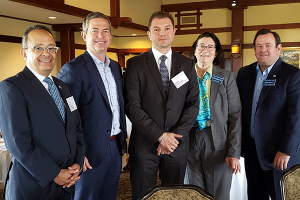 (March 3,2020) The cross-border connections that make the Baja California region a dynamic economic center were the focus of a recent California Chamber of Commerce international breakfast meeting at The Lodge at Torrey Pines in La Jolla.