Austria is in central Europe and is a member of the European Union. It is geographically similar to the size of South Carolina and Vienna is the capital. Austria has a population of 8.87 million people with a gross domestic product (GDP) of $445.075 billion. Austria is categorized as a high income country with a well-developed market economy. Austria has developed a large service sector, while sustaining their manufacturing and agriculture fields. World Bank, CIA

In 2020, the US imported $11.6 billion of goods from Austria. Some of the key imported goods were transportation equipment, non-electrical machinery, and chemicals. They comprised 21.8%, 17.4%, and 16.2% of imports, respectively. Another major import from Austria was beverages and tobacco, which had a value of over $1 billion. Austria is the 45th largest exporting partner of the US, with a total of approximately $3.43 billion worth of goods exported from the US to Austria in 2020. 37.7% of US exports to Austria were chemicals, with a value of $1.29 billion. Other top export categories were transportation equipment, computer and electronic products, and non-electrical machinery. US Department of Commerce

The strong economic relationship between the US and Austria is not just prominent in trade, but also in foreign direct investment (FDI) flows. In 2019, the US had roughly $7.64 billion invested in Austria and Austria 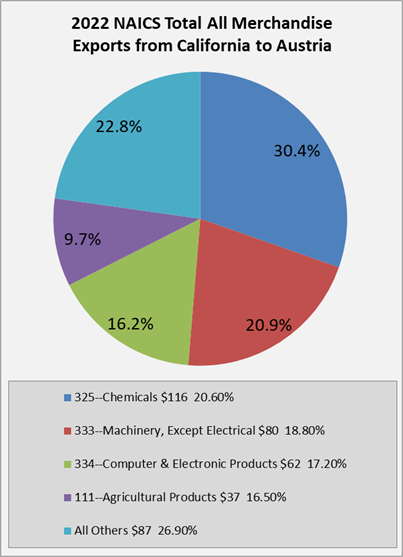 had $6.25 billion invested in the US. US Department of Commerce

In 2019, Austria was the tenth fastest-growing source of FDI in the U.S. In 2018, Austrian FDI supported 28,400 jobs. $29 million was invested into research and development in the US and $1.3 billion was put toward expanding US exports. The top industry sectors for Austrian FDI in the US were: industrial equipment, software and IT services, plastics, food and beverages, metals, and electronic components. SelectUSA

The United States, California, in particular, has a strong trade relationship with Austria. California is one of the top exporting states to Austria. In 2020, California exported $268 million of goods to Austria. The major category of exported goods from California was agricultural products, with a total of $55.3 million, and accounted for 20.6% of total exports to Austria from California. The other major exports included non-electrical machinery with a value of $50 million and computer and electronic products with a value of $46 million. California is also the largest importer of goods from Austria compared to the other states in the US. California imported almost $1.2 billion of goods in 2020 from Austria. 38% of those imports were beverages and tobacco with a value of $458.96 million. The following major imported good categories were transportation equipment, non-electrical machinery, and chemicals. US Department of Commerce

Austria is one of the nations that is currently involved in negotiations for the Transatlantic Trade and Investment Partnership (TTIP) with the rest of the European Union and the United States. The United States and the European Union have a strong bilateral trade relationship totaling $698.7 billion in 2015. A free trade agreement, such as TTIP, desires to strengthen that relationship by eliminating tariffs, aligning compatible regulations to open trade, and furthering trade in the service sector.