According to the World Bank, France is a high income developed country in Europe. It has a population of 67.3 million people with a corresponding gross domestic product (GDP) of $2.63 trillion. It is the most visited country in the world, with 89 million tourists in 2018. France is a member of the European Union (EU). The EU and US trade relationship is the largest in the world. The European Union is the largest merchandise and service trading partner of the United States and they have succeeded with healthy flows of foreign direct investment both ways. France has a diverse economy with various sectors. The government has successfully privatized numerous companies in a variety of markets, such as telecommunication and Air France. World Bank

France is the 14th largest export destination of goods for the United States. In 2021, the United States exported around $29.89 billion worth of products to France, a decrease from $37.6 billion in 2019. The main exports were transportation equipment, chemicals, oil and gas, and computer/electronic products. Transportation equipment totaled roughly $7.58 billion of total exports to France. The United States was the second largest export destination for France in 2020. The United States imported approximately $50 billion worth of goods in 2021. Transportation equipment was the top import into the U.S. from France, totaling $11.6 billion. The US also imported around $8.8 billion dollars worth of chemicals from France in 2021. Other key imported goods were beverages and tobacco products, non-electrical machinery, as well as reimports.

France and the United States also have a strong foreign direct investment (FDI) relationship. In 2021, the US had approximately $106.16 billion dollars of FDI flow into France. On the other hand, France had a little over $325.74 billion worth of FDI flowing into the United States in 2020. BEA

France was the 5th largest source of FDI in the U.S. in 2020 which supported 765,100 jobs. $4.5 billion went to investing in research and development and another $25.7 billion went to expanding U.S. exports. the top industry sectors for French FDI in the US were: software and IT services,  business services, chemicals, financial services, industrial equipment, and communications. Select USA

California is one of the top exporting states to France with $2.19 billion worth of goods being exported to France in 20210. The main export categories include computer and electronic products, chemicals, transportation equipment, and miscellaneous manufactured commodities. California is also one of the largest state importers from France, importing $4.06 billion worth of goods from France. Similar to the key import for the United States as a whole, California’s #1 import from France is transportation equipment totaling around $1.18 billion in 2021. Other key imports from France to California are beverages and tobacco products, computer and electronic products, and chemicals. US Department of Commerce

France is one of the nations  currently involved in negotiations for the Transatlantic Trade and Investment Partnership (TTIP) with the rest of the European Union and the United States. The United States and the European Union have a strong bilateral trade relationship totaling $698.7 billion in 2015. A free trade agreement, such as TTIP, aims to strengthen that relationship by eliminating tariffs, aligning compatible regulations to open trade, and furthering trade in the service sector. 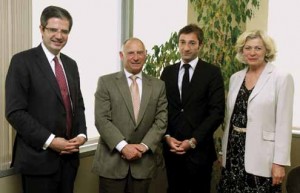 (June 12, 2012) Economic relations between France and California were the subject of the day when the Ambassador of France called on the California Chamber of Commerce in Sacramento this week.

During his trip to Northern California, Ambassador François Delattre focused on innovation and entrepreneurship, visiting a business incubator and meeting with researchers and U.S. firms in Berkeley and the Bay Area.

Regarding the European Union, the Ambassador cited economic restraint, promoting growth, and improved governance as key priorities for the near future. The United States exported $27.8 billion to France in 2011, while importing $40 billion. California exports to France totaled $2.3 billion in 2011,while imports amounted to $2.5 billion.

Transportation equipment is a major import and export product. France is a major investor in California, with French companies supporting 60,000 jobs. 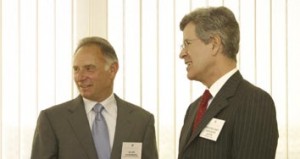 California Chamber President Allan Zaremberg (left) and His Excellency Jean-David Levitte, Ambassador of France to the United States, greet guests at the Chamber International Luncheon Forum this week featuring remarks by Levitte. The ambassador noted that California is the state with the most exports to France and called attention to the role of trade and economic ties in the evolution of the European Union and the longest peaceful era in the history of Europe. He also highlighted the long history of shared interests between France and the United States and applauded the role of U.S. veterans in the liberation of France at the close of World War II