Croatia is an Eastern European country that borders the Adriatic Sea. The World Bank classifies Croatia as a high income country, with a population of 4.06 million people and a gross domestic product (GDP) of $60.75 billion. Croatia joined the European Union in 2013 to improve its economy and expand trade opportunities. Croatia’s major trade partners are other European countries, especially Italy and Germany. World Bank, CIA

The United States and Croatia’s trade relationship has fluctuated in the last ten years, though imports into the US have remained seemingly steady. The exports from the US to Croatia have risen and fallen from 2005; however exports have still increased from 2005. In 2020, the US exported nearly $317.9 million of goods to Croatia. Minerals and ores were the largest export; it made up 44.3% of the total, with a value of $140.8 million. The other significant exports were oil and gas products at $38.4 million, chemicals at $33.68 million, and non-electrical machinery at $24.32 million. In the same year, the US imported $601 million worth of goods from Croatia. In 2020, $241 million of imported goods from Croatia were chemicals, comprising 40.2% of the total. After chemicals, the 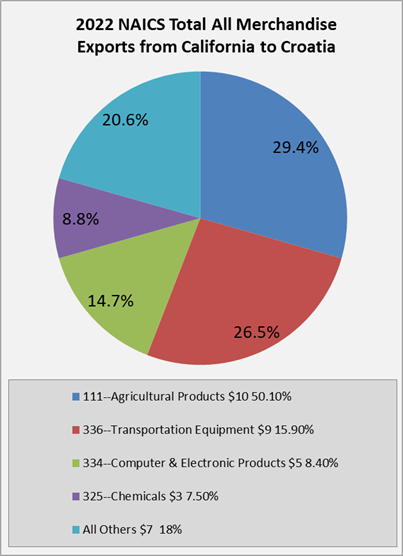 In 2019, the U.S.’ FDI into Croatia totaled $184 million.  While Croatian FDI into the U.S. totaled $4 million in the same year. Bureau of Economic Analysis, U.S. Department of Commerce

Out of the $317.9 million worth of goods the US exported to Croatia in 2020, California contributed approximately $21.85 million. In the US, California is one of the top ten largest exporting states to Croatia. 50.1% of California exports to Croatia were agricultural products, which had a value of over $10.95 million. California exported $3.48 million of computers and electronic products, and $1.8 million of chemicals. In 2020, California imported $16.7 million worth of goods. Over 26.9% of goods imported from Croatia to California were made up of non-electrical machinery, this was followed by food manufactures and agricultural products making up $4.4 million and $1.9 million of the total, respectively. US Department of Commerce

Croatia is one of the nations that is currently involved in negotiations for the Transatlantic Trade and Investment Partnership (TTIP) with the rest of the European Union and the United States. The United States and the European Union have a strong bilateral trade relationship totaling $698.7 billion in 2015. A free trade agreement, such as TTIP, desires to strengthen that relationship by eliminating tariffs, aligning compatible regulations to open trade, and furthering trade in the service sector.