Sweden is a high income county in Northern Europe and is slightly larger than California in relative size. Sweden has a population of 10.28 million people and a gross domestic product (GDP) of $530.8 billion. Sweden has one of the highest standards of living in the world with a strong capitalist system and welfare state. Sweden is one of the 28 countries in the European Union. World Bank, CIA

The United States is one of Sweden’s top 5 largest export destination. The United States imported $12.5 billion worth of Swedish goods in 2020. The key imported goods from Sweden into the US were transportation equipment, chemicals, non-electrical machinery totaling over $2 billion each followed by computer and electronic products at $814 million. Sweden is the 41st largest export destination for goods for the United States. In 2020, the United States exported $4.68 billion worth of products to Sweden. The main exports included chemicals, which composed 25.2% of all exports to Sweden, and was worth roughly $1.18 billion dollars. Other main product exports from the US to Sweden were computer and electronic products, oil and gas, and transportation equipment, .

Direct investment from the United States into Sweden totaled around $38.7 billion in 2019, while FDI from Sweden into the US was approximately $61.3 billion of the same year. In 2018, Swedish FDI supported 229,100 jobs in the US, contributed $698 million to research and development and another $7.7 billion to expanding US exports. The top industry sectors for Swedish FDI in 2018 were: software and IT services, industrial equipment, communications, business services, metals, and consumer electronics. (Select USA) 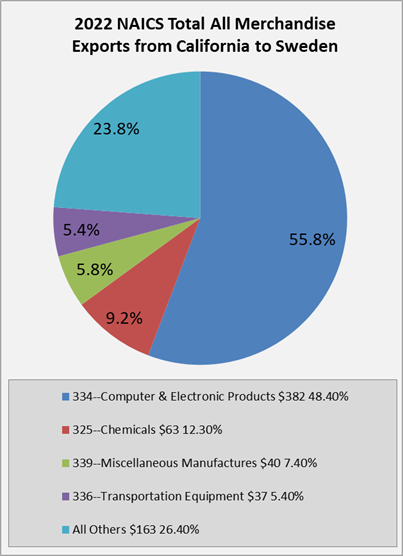 Sweden is one of the European nations that are currently involved in negotiations for the Transatlantic Trade and Investment Partnership (TTIP) with the rest of the European Union and the United States. The United States and the European Union have a strong bilateral trade relationship totaling $698.7 billion in 2015. A free trade agreement, such as TTIP, desires to strengthen that relationship by eliminating tariffs, aligning compatible regulations to open trade, and furthering trade in the service sector.