Poland is a high income country east of Germany in Central Europe. It has a population of nearly 37.9 million people with a total gross domestic product (GDP) of $595.8 billion in 2019. Poland is also a member of the European Union (EU) and was the only member of the EU to escape recession in wake of the 2008 global economic crisis. Poland has expanded policies to support economic liberalization and has benefited from strong service and industry sectors. World Bank, CIA

The United States and Poland have a beneficial trade relationship. Exports to Poland from the US have steadily increased since 2009. In 2020, the US exported $4.9 billion of goods to Poland. Approximately $1.3 billion of the exports were categorized as transportation equipment, which accounted for 26.5% of total exports from the US to Poland. Other top exports from the US to Poland were computer and electronic products, with a total of $885 million, followed by non electrical machinery, with a total of $422 million. In concurrence with the trend of the exports to Poland, imports from Poland have also steadily increased from 2009. The United States imported $8.6 billion worth of goods from Poland in 2020. 19% and $1.6 billion of those imports were computer and electronic products. The US also imported $1.5 million of transportation equipment and $1.17 billion of non-electrical machinery . US Department of Commerce 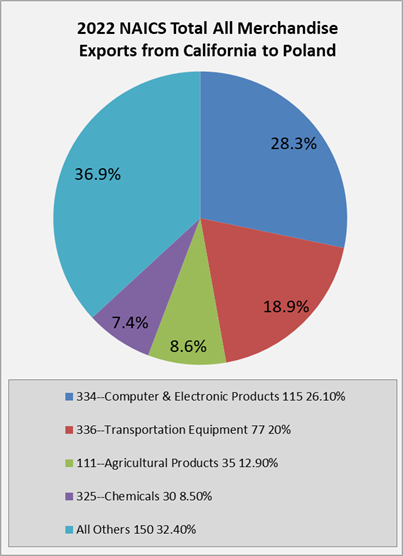 According to a White House Fact Sheet in July 2016, “more than 200,000 Poles are employed directly by U.S. companies, and U.S. firms are some of the largest sources of foreign direct investment in Poland, having invested more than $30 billion in the country.” In 2019, the United States had $10.4 billion of foreign direct investment (FDI) in Poland (BEA). Polish FDI into the U.S. was undisclosed in 2019, however in 2018 Polish FDI supported 1,000 jobs in the U.S. The top industry sectors for Polish FDI in the US are: software and IT services, consumer products, pharmaceuticals, business services, communications, and chemicals. (Select USA)

In the United States, California is one of the largest exporters of goods to Poland. California exported $323.7 million of goods to Poland in 2020, 26.1% of which were computer and electronic products with a total of $84.6 million. Transportation equipment was another leading export totaling $64.8 million, followed by non-electrical machinery with a value of roughly $41.9 million. California is also one of the largest importers of Polish goods in the United States. In 2020, the California imported $406 million worth of goods from Poland. The largest import was food manufacturers, accounting for 13.4% of total imports into California from Poland ($54.4 million). Reimports accounted for 11.4% and $46 million.  Non-electrical machinery was another leading import to California from Poland, with a value of $42.9 million. US Department of Commerce

Poland is one of the nations that is currently involved in negotiations for the Transatlantic Trade and Investment Partnership (TTIP) with the rest of the European Union and the United States. The United States and the European Union have a strong bilateral trade relationship totaling $698.7 billion in 2015. A free trade agreement, such as TTIP, desires to strengthen that relationship by eliminating tariffs, aligning compatible regulations to open trade, and furthering trade in the service sector.