Portugal is on the border of Southwestern Europe on the coast of the North Atlantic Ocean. Portugal is classified as a high income country with a population of 10.26 billion people and a gross domestic product (GDP) of $238.7 billion. The country has developed a strong service market based economy that accounts for approximately 75% of its GDP. Similar to other European countries, a great deal of Portugal’s trade is within Europe and surrounding countries; however, the United States is Portugal’s sixth largest export destination. World Bank, CIA

Portugal is the 62nd largest export destination for the United States. In 2020, the US exports totaled of $1.65 billion of goods. Over a third of those exports to Portugal was oil and gas, with a value of roughly $591 million. The US also exported around $334 million of transportation equipment, and $196 million of agricultural products. US imports from Portugal totaled $3.88 billion worth of goods from Portugal in 2020. 18.4% of those goods were petroleum and coal products, and were worth $713 million. The next two leading imports were chemicals at $369.6 million and computer and electronic products with a value of $260 million. US Department of Commerce

The United States had approximately $2.4 billion of foreign direct investment (FDI) in Portugal in 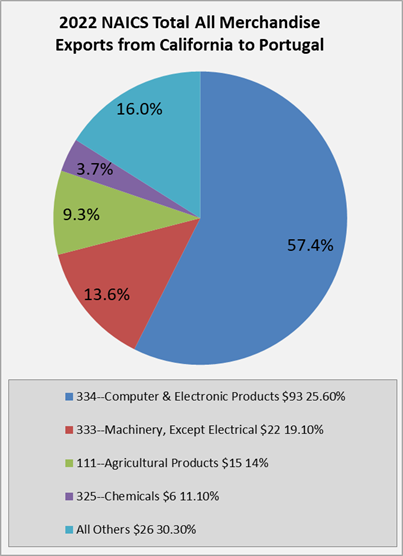 2019, Portuguese FDI into the U.S. was undisclosed the same year. BEA

In 2020, California exported almost $76 million of goods. Over 25.6% of those goods were computer and electronic products, with a total value of $19.5 million. The second leading export from California to Portugal was transportation equipment, which total $14.5 million and accounted for 19.1% of total exports to Portugal from California. Other major exports included agricultural products and non-electrical machinery. California is one of the largest importers of goods from Portugal into the US. In 2020, California imported $432.6 million worth of goods. Wood products were a major import from Portugal, making up 39.5% of imports and had a value of $170.9 million. US Department of Commerce

Portugal is one of the nations that is currently involved in negotiations for the Transatlantic Trade and Investment Partnership (TTIP) with the rest of the European Union and the United States. The United States and the European Union have a strong bilateral trade relationship totaling $698.7 billion in 2015. A free trade agreement, such as TTIP, desires to strengthen that relationship by eliminating tariffs, aligning compatible regulations to open trade, and furthering trade in the service sector.