The Czech Republic is a landlocked Central European country. It is classified by the World Bank as a high income country with a population of 10.6 million people and a gross domestic product (GDP) of $250.68 billion. The Czech Republic has a stable market economy that benefits from trade relationships affirmed through their membership in the European Union (EU). The Czech Republic’s single largest industry for their economy is the auto industry. In 2015, they produced over one million cars, and 80% of them were exported, bolstering their economy. World Bank, CIA

In 2020, the US exported $2.98 billion of goods to the Czech Republic. 43.4% of those goods were computer and electronic products, with a total of $1.2 billion. The following top exports were non-electrical machinery, with a total of $477 million and transportation equipment, valuing $319.6 million. The United States imported $5.5 billion of goods from the Czech Republic in 2020. For the second year in a row, the top import was computer and electronic products, which made up 24.2% of the total. The second top import was non-electrical machinery, which made up 12.7% of the total. These were followed closely by transportation equipment which made up 12.3% of total imports and chemicals which made up 9%. US Department of Commerce 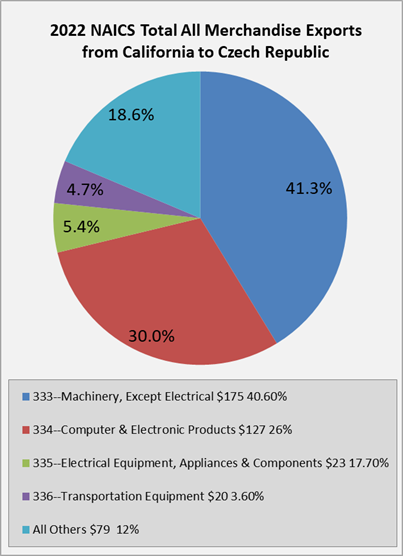 The Czech Republic is one of the nations that is currently involved in negotiations for the Transatlantic Trade and Investment Partnership (TTIP) with the rest of the European Union and the United States. The United States and the European Union have a strong bilateral trade relationship totaling $698.7 billion in 2015. A free trade agreement, such as TTIP, desires to strengthen that relationship by eliminating tariffs, aligning compatible regulations to open trade, and furthering trade in the service sector.