Hungary is a high-income country in Central Europe. It has a population of 9.75 million people and a gross domestic product (GDP) of approximately $155.81 billion. Hungary is a member of the European Union and has a strong market economy that has recovered from deficit suffered from the global economic crisis. As a member of the EU, Hungary’s main trading partners are other European countries, predominantly Germany and Austria. World Bank, CIA

In 2021, the United States exported $2.9 billion worth of goods to Hungary. The largest export category, which accounted for $1.18 billion of total exports from the US to Hungary was computer/electronic products. Two other key exports from the US to Hungary were non-electrical machinery with a total of $550 million and chemicals with a value of $366 million. The same year, the United States imported $7.08 billion of goods from Hungary. $1.58 billion was transportation equipment, while $1.47 was chemicals, and $1.14 billion was in computers/electronic products. Other key imports from Hungary were electrical appliances/equipment, followed by non-electrical machinery. US Department of Commerce

Not only do the US and Hungary have a substantial trade relationship, but they also have sufficient flows of foreign direct investment (FDI).  Hungary had $89 million invested in the United States in 2020, and the U.S. had $13.29 billion invested in Hungary. BEA

Hungary is one of the nations that is currently involved in negotiations for the Transatlantic Trade and Investment Partnership (TTIP) with the rest of the European Union and the United States. The United States and the European Union have a strong bilateral trade relationship totaling $698.7 billion in 2015. A free trade agreement, such as TTIP, desires to strengthen that relationship by eliminating tariffs, aligning compatible regulations to open trade, and furthering trade in the service sector. 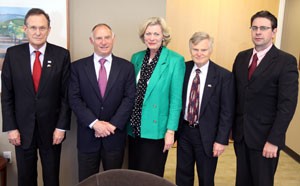 (April 29, 2011) A visit from Hungarian Ambassador to the United States Gyorgy Szapary (left) provided an opportunity to discuss Hungary’s role as president of the European Union for the first half of 2011. With the ambassador are (from left) Ambassador Gyorgy Szapary; CalChamber President and CEO Allan Zaremberg; Susanne Stirling, CalChamber Vice president, International Affairs; The Honorable Nicholas Bartsch, Honorary Consul of Hungary in Sacramento; and Dr. Gabor Kaleta, Consul, Hungarian Consulate in Los Angeles.