SelectUSA is a U.S. government-wide program led by the U.S. Department of Commerce. Since its inception, SelectUSA has facilitated more than US$64 billion in investment, creating and/or retaining over 86,000 U.S. jobs. In 2018 alone, SelectUSA facilitated $20.8 billion.
SelectUSA’s mission is to facilitate job-creating business investment into the United States and raise awareness of the critical role that economic development plays in the U.S. economy.

SelectUSA assists U.S. economic development organizations to compete globally for investment by providing information, a platform for international marketing, and high-level advocacy. SelectUSA also helps companies of all sizes find the information they need to make decisions, connect to the right people at the local level, and navigate the federal regulatory system.

BEA’s economists produce some of the world’s most closely watched statistics, including U.S. gross domestic product, better known as GDP. We do state and local numbers, too, plus foreign trade and investment stats and industry data. The Bureau of Economic Analysis (BEA) promotes a better understanding of the U.S. economy by providing the most timely, relevant, and accurate economic accounts data in an objective and cost-effective manner. BEA is one of the world’s leading statistical agencies. Although it is a relatively small agency, BEA produces some of the most closely watched economic statistics that influence the decisions made by government officials, business people, households, and individuals. BEA’s economic statistics, which provide a comprehensive, up-to-date picture of the U.S. economy, are key ingredients in critical decisions affecting monetary policy, tax and budget projections, and business investment plans. BEA : Interactive Data

Impacts of Foreign Direct Investment in the U.S. Economy 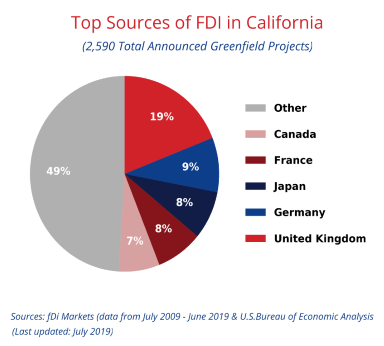 Top Sources of FDI in California

The U.S. Investment Advisory Council (IAC) was established by the Secretary of Commerce to solicit private sector advice on the promotion and retention of foreign direct investment (FDI) to the United States. The IAC advises the Secretary of Commerce on U.S. government policies and programs that affect FDI; identifies and recommends programs and policies to help the United States attract and retain FDI; and recommends ways to support the United States remaining the world’s preeminent destination for FDI. The IAC acts as a liaison among the stakeholders represented by the membership and provides a forum for the stakeholders on current and emerging issues regarding FDI. Specific priorities and recommendations are determined by IAC members, all of whom are appointed for two‐year terms.

Committee on Foreign Investment in the United States (CFIUS)

The Committee on Foreign Investment in the United States (CFIUS) is an inter‐agency committee authorized to review transactions that could result in control of a U.S. business by a foreign person (“covered transactions”), in order to determine the effect of such transactions on the national security of the United States. CFIUS operates pursuant to section 721 of the Defense Production Act of 1950, as amended by the Foreign Investment and National Security Act of 2007 (FINSA) (section 721) and as implemented by Executive Order 11858, as amended, and regulations at 31 C.F.R. Part 800.

CFIUS and the U.S. Department of the Treasury releases an annual report to Congress. This mandated report consists of a review of inward Foreign Direct Investment in relation to national security and the investigations conducted during the year.

The U.S. Government Accountability Office (GAO) is an independent, nonpartisan agency that works for Congress. Often called the “congressional watchdog,” GAO investigates how the federal government spends taxpayer dollars. The head of GAO, the Comptroller General of the United States, is appointed to a 15‐year term by the President from a slate of candidates Congress proposes. Gene L. Dodaro became the eighth Comptroller General of the United States and head of the U.S. Government Accountability Office (GAO) on December 22, 2010, when he was confirmed by the United States Senate. He was nominated by President Obama in September of 2010 from a list of candidates selected by a bipartisan, bicameral congressional commission. He had been serving as Acting Comptroller General since March of 2008.

The Office of Information and Regulatory Affairs (OIRA) is a statutory part of the Office of Management and Budget within the Executive Office of the President. OIRA is the United States Government’s central authority for the review of Executive Branch regulations, approval of Government information collections, establishment of Government statistical practices, and coordination of federal privacy policy. The office is comprised of five subject matter branches and is led by the OIRA Administrator, who is appointed by the President and confirmed by the United States Senate.

Created more than two decades ago, the Organization for International Investment (OFII) is a non‐profit business association in Washington, D.C. representing the U.S. operations of many of the world’s leading global companies, which insource millions of American jobs. OFII works to ensure the United States remains the top location for global investment. As such, OFII advocates for fair, non‐discriminatory treatment of foreign‐based companies and promotes policies that will encourage them to establish U.S. operations, increase American employment, and boost U.S. economic growth.

BEA’s Latest FDI Data (Again) Confirms It: There’s No Better Place to Invest and Do Business Than the United States

The United States has consistently remained the largest recipient of FDI in the world.
Select USA, December 12, 2019

FDI into the U.S. and California from the EU
Delegation of the EU to the US, February 2019