Finland is located in Northern Europe between Sweden and Russia. It has a coastline on the Baltic Sea, where the Capital, Helsinki, lies. Finland is industrialized and retains a high gross domestic product per capita, much like its neighbor, Sweden. Finland has a population of 5.5 million people and a gross domestic product (GDP) of $269.29 billion. As a high income country, it promotes a free-market economy and relies heavily on trade. In fact, in the most recent years, one third of Finland’s GDP has come from exports. The two largest trading partners of Finland are Germany and Sweden. World Bank, CIA

The United States and Finland have a trade relationship that totaled approximately $6.48 billion in 2020. The United States exported $1.58 billion worth of goods to Finland in 2020. Computer and electronic products was the top export which made up 19.3% and $305 million of the total. The second largest export was chemicals which made up 16% and $254 million of the total. This was followed by transportation equipment and non-electrical machinery. Imports from Finland to the US totaled $4.9 billion in 2020. Chemicals made up 20.6% of the total, followed by non-electrical machinery, paper, and computer and electronic products. US Department of Commerce 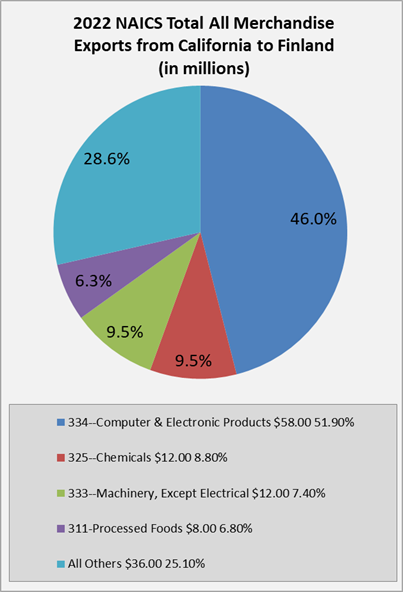 direct investment (FDI). In 2019, the US had $3.7 billion invested in Finland and Finland had $9.9 billion invested in the US. Finnish FDI into the US supported 35,400 jobs and contributed to $1.4 billion in research and development. Finish FDI also contributed $1.6 billion to expanding US exports. The top industry sectors for Finnish investment were: software and IT services, industrial equipment, communications, chemicals, metals, and plastics. Select USA

California is the second largest US exporting state to Finland. In 2020, California exported $157.7 million of goods to Finland. Computer and electronic products account for 51.9% of total exports from California to Finland and had a value of $81.9 million. The other leading exports from California were non-electrical machinery , chemicals, and transportation equipment making up less 8.8%, 7.4%, and 6.8%, respectively. Additionally, California is one of the largest importing states of goods from Finland. In 2020, California imported a variety of goods with a total value of $292 million. California imported $131.4 million of transportation equipment making up 45% of the total. This was followed by $45 million or 15.4% in computers and electronic products. California also imported approximately $45 million worth of non-electrical machinery and $17.8 million worth of petroleum and coal products. US Department of Commerce

President Obama hosted a summit with the leaders of Denmark, Finland, Iceland, Norway, and Sweden in Washington D.C. in May. The summit was to pursue discussions on multiple topics, including immigration, security, climate change, and economic and trade relations

Finland is one of the nations that is currently involved in negotiations for the Transatlantic Trade and Investment Partnership (TTIP) with the rest of the European Union and the United States. The United States and the European Union have a strong bilateral trade relationship totaling $698.7 billion in 2015. A free trade agreement, such as TTIP, desires to strengthen that relationship by eliminating tariffs, aligning compatible regulations to open trade, and furthering trade in the service sector.