Belgium is a high income nation with a gross domestic product (GDP) of $521.86 billion. As a relatively small country, Belgium is comparatively dense with a population roughly 11.54 million people.  World Bank

Being in Western Europe and a member of the European Union, has allowed Belgium to establish strong trade relationships. Belgium has been a member of the World Trade Organization (WTO) since 1995 and before that was a member of the General Agreement on Tariffs and Trade (GATT) since 1948. Belgium’s main exports are chemicals, machinery, and equipment. They are also large importers of raw materials, machinery, and equipment. In addition, they are a substantial importer of raw diamonds and an exporter of finished diamonds. BEA

Belgium is the 13th largest export destination for the United States, with exports in goods totaling approximately $33.7 billion. A majority of exports from the United States into Belgium include chemicals, miscellaneous manufactured commodities, transportation equipment, and non-electrical machinery. The United States imports around $20.99 billion of merchandise from Belgium. The top categories of imported goods from Belgium include chemicals, primary metals, transportation equipment, and miscellaneous manufacture goods, and . US Department of Commerce

Foreign direct investment (FDI) into the United States from Belgium totaled $66.43 billion in 2020. Belgian FDI supported 70,000 jobs in the United States. $321 million went to investing in research and development and another $3.6 billion went to expanding U.S. exports. The top industry sectors in the US that receive FDI from Belgium are: software and IT services, food and beverages, plastics, chemicals, electronic components, and metals. Select USA.

FDI from the U.S. into Belgium totaled $69.53 billion in the 2020. Bureau of Economic Analysis, U.S. Department of Commerce

California was the second top exporting state in the US for exports to Belgium with $3.7 billion in goods exported in 2021. Transportation equipment was the top export to Belgium at $1.4 billion. Followed by chemicals, which constituted $678 million of all goods exported to Belgium from California. Other key Californian exports to Belgium are non-electrical machinery, computer and electronic products, and miscellaneous manufactured commodities. Furthermore, California imports roughly $949 million of goods from Belgium; including, transportation equipment, chemicals, processed foods, primary metals, and computer and electronic products. US Department of Commerce

Belgium is one of the nations that is currently involved in negotiations for the Transatlantic Trade and Investment Partnership (TTIP) with the rest of the European Union and the United States. The United States and the European Union have a strong bilateral trade relationship totaling $698.7 billion in 2015. A free trade agreement, such as TTIP, desires to strengthen that relationship by eliminating tariffs, aligning compatible regulations to open trade, and furthering trade in the service sector. 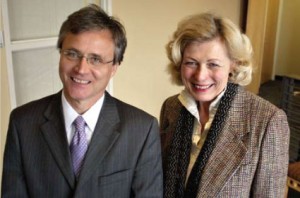 Consul General Geert M. Criel with the Consulate General of Belgium in Los Angeles, visits with Susanne Stirling, CalChamber vice president of international affairs, as part of a February 11 stop in Sacramento to meet with government officials, private sector companies and business associations to discuss trade and investment opportunities. California exports more than $2 billion to Belgium with a 36 percent increase of computer and electronic exports last year.