• Hope that the Biden administration will greenlight negotiations for the first trade agreement between the United States and a sub-Saharan African country, U.S.-Kenya in 2022. Meg Whitman was nominated to be U.S. Ambassador to Kenya in December 2021.

• AGOA brings good will to U.S.-African trade at large during the global pandemic.

• AfCFTA went into effect on January 1, 2021 after a six-month delay due to COVID. AfCFTA is expected to bring 30 million people out of extreme poverty and raise the incomes of another 68 million who live on less than $5.50 per day.

According to the International Monetary Fund (IMF), the outlook for sub-Saharan Africa is uncertain as the region battles one of the slowest recoveries compared to other areas. The sub-Saharan economy is expected to expand by 3.7% in 2021 and 3.8% in 2022. The region continues to struggle with a slow vaccine rollout and new variants, and is vulnerable to food price inflation, as well as disruptions in global activity. The IMF notes, however, that the region has a promising renewable energy potential. 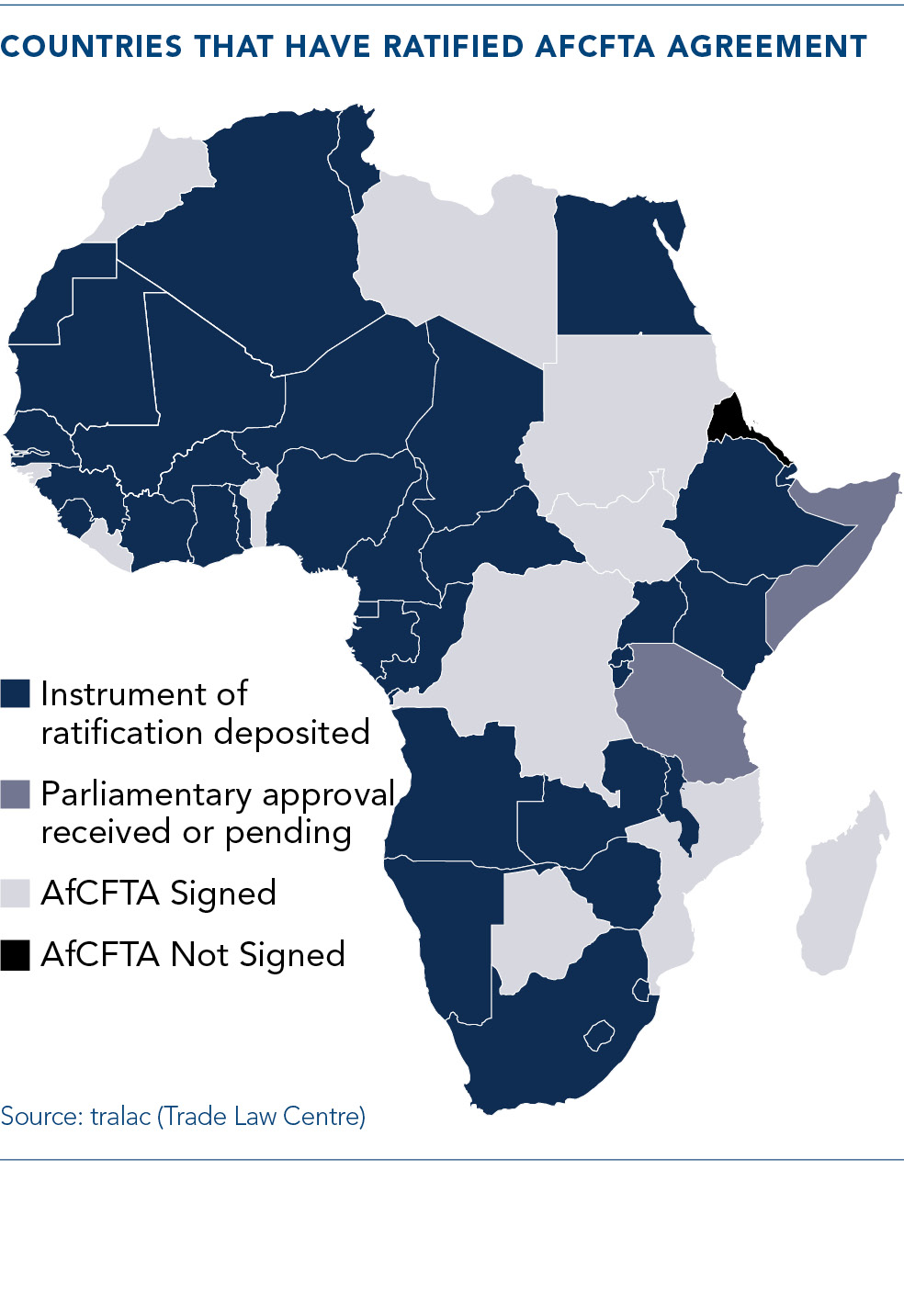 The African Growth and Opportunity Act (AGOA) is a trade preference program, enacted in 2000, that has been the model behind U.S.-African trade and investment since. The AGOA provides duty-free entry into the United States for almost all African products. This has helped to expand and diversify African exports to the United States. In 2015, the U.S. Congress renewed AGOA through 2025.

The Act embodies a trade and investment-centered approach to development. Enactment of the AGOA has stimulated the growth of the African private sector and provided incentives for further reform. The AGOA is aimed at transforming the relationship between the United States and sub-Saharan Africa away from aid dependence to enhanced commerce by providing commercial incentives to encourage bilateral trade. Since 2000, AGOA has helped increase U.S. two-way trade with sub-Saharan Africa.

In November 2021, President Joe Biden notified Congress of his intent to terminate the designation of Ethiopia, Guinea, and Mali as beneficiaries under AGOA beginning January 1, 2022, as these countries had been identified by the Biden administration as falling out of compliance.

The African Continental Free Trade Area (AfCFTA) was brokered by the African Union in 2018, with the pan-African free trade zone taking effect on January 1, 2021. The effective date was postponed from July 1, 2020 due to the COVID-19 pandemic.

The AfCFTA will have far-reaching benefits for the region, representing the opportunity for countries in sub-Saharan Africa to boost long-term economic growth, reduce poverty and broaden economic inclusion. The AfCFTA creates the largest free trade area in the world by area and number of participating countries, connecting more than 1.2 billion people across 55 countries with a total gross domestic product (GDP) of $2.5 trillion. As of September 2021, 38 of the 54 participating countries, have ratified the agreement, including Nigeria, the agreement’s largest economy.

As of July 2021, countries completed their tariff reduction schedules and finalized essential rules of origin. Over the next 5 to 10 years, 90% of tariffs for goods traded within the bloc will be liberalized. Intra-African trade is only a small portion of all African trade, making up about 15%–18%. According to the International Monetary Fund, eliminating tariffs could boost trade in the region by 15% to 20%. The World Economic Forum estimates AfCFTA will allow the area to generate $4 trillion in investments and goods/services transactions.

On March 17, 2020 following the procedures laid out in the Trade Promotion Authority (TPA), the Trump administration notified Congress of the intent to enter into negotiations for a U.S.-Kenya trade agreement.

From its location on the eastern coast of Africa, Kenya serves as a gateway to the region and a major commercial hub that can provide opportunities for U.S. consumers, businesses, farmers, ranchers and workers. Kenya receives benefits under the AGOA with the objective of expanding U.S. trade and investment with sub-Saharan Africa, to stimulate economic growth, to encourage economic integration, and to facilitate sub-Saharan Africa’s integration into the global economy.

The first round of virtual free trade agreement (FTA) negotiations, which was expected to take place in 2021, never materialized. U.S. Trade Representative Katherine Tai met with a few of her Kenyan counterparts to discuss the importance of strengthening the U.S.-Kenya relationship, but the U.S.-Kenya FTA remains under review with the Biden administration. President Biden also met with Kenya President Kenyatta in October 2021, but the conversation largely surrounded COVID.

U.S.-Kenya bilateral trade currently exceeds $900 million annually. In 2020, U.S. exports to Kenya totaled $370.7 million, while imports into the United States from Kenya totaled $568.9 million. Apparel manufacturing product imports into the United States made up almost 68% of the total. California is the second largest exporting state and the first largest importing state of Kenyan goods, with exports totaling $36.6 million in 2020. Imports to California from Kenya totaled $107.8 million, with apparel manufacturing products again making up more than 63% of the total.

• Prosper Africa is a one-stop shop to facilitate increased trade and investment between U.S. and African businesses.

Agenda 2063 is Africa’s blueprint and master plan for transforming itself into the global powerhouse of the future. Agenda 2063 has been described as “a concrete manifestation of the pan-African drive for unity, self-determination, freedom, progress and collective prosperity pursued under Pan-Africanism and African Renaissance.”

In affirming their commitment to Agenda 2063, African leaders called for reprioritizing Africa’s agenda from the struggle against apartheid and attaining political independence for the continent, to inclusive social and economic development, continental and regional integration, democratic governance, and peace and security, among other issues.

There was little discussion on Agenda 2063 in 2021, likely due to the continent’s focus on the AfCFTA and continuing the battle against COVID, along with the rest of the world.

It was announced in November 2021 that President Biden is expected to host the second U.S.-Africa Leaders Summit in 2022. The summit’s goals include continuing efforts to strengthen ties with African partners as well as collaborating with African counterparts in key areas.

It is hoped that the Biden administration will continue with negotiations for a U.S.-Kenya Free Trade Agreement, and that the African Continental Free Trade Area will begin to reap benefits for the region.

The California Chamber of Commerce believes that it is in the mutual economic interest of the United States and sub-Saharan Africa to promote stable and sustainable economic growth and development in sub-Saharan Africa and that this growth depends in large measure upon the development of a receptive environment for trade and investment.

The CalChamber is supportive of the United States seeking to facilitate market-led economic growth in, and thereby the social and economic development of, the countries of sub-Saharan Africa.

In particular, the CalChamber is supportive of the United States seeking to assist sub-Saharan African countries, and the private sector in those countries, to achieve economic self-reliance.