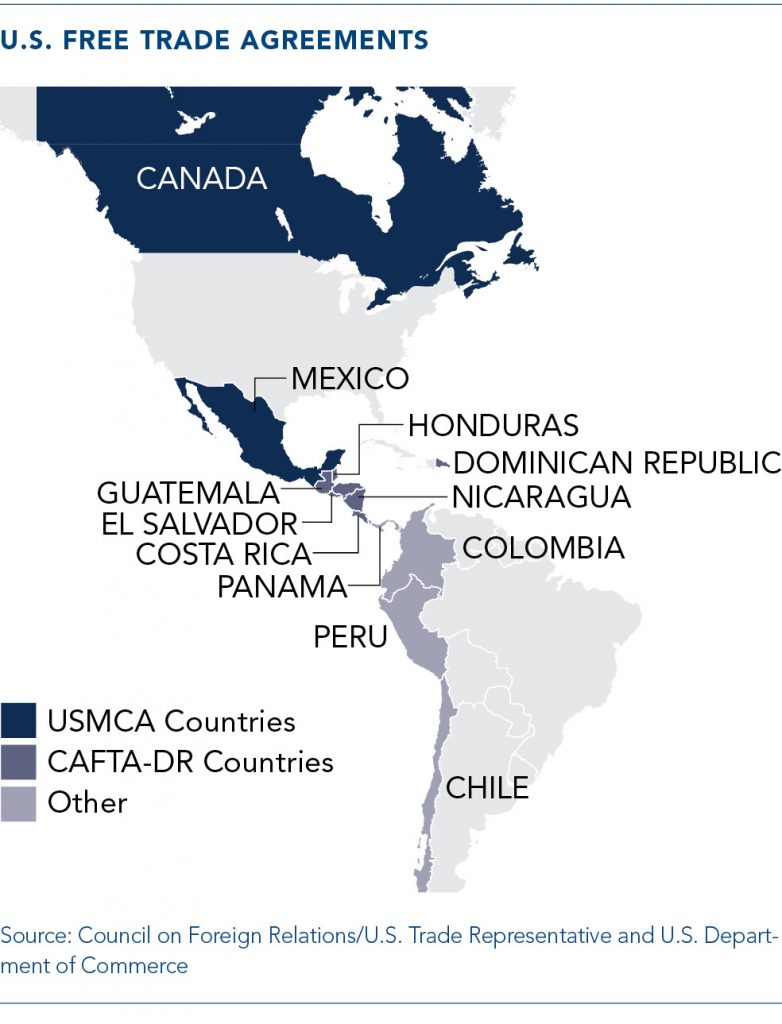 • Goods exports to countries in the Americas represent more than 40% of U.S. exports, with Canada and Mexico alone making up more than one-third of exports.

• U.S. engagement in the Americas imperative to strengthen U.S. competitiveness.

The United States is scheduled to host the Ninth Summit of the Americas in the fall of 2021, the first time the United States will host the meeting since the inaugural summit held in Miami in 1994. The meeting, which takes place every three years, is the only one of its kind that brings together leaders from all countries in North, Central and South America and the Caribbean. At the summit, leaders discuss common policy issues, affirm shared values, and commit to concerted actions at the national and regional levels to address continuing and new challenges faced in the Americas. The last summit took place in Lima, Peru in 2018 and had the theme of “Democratic Governance Against Corruption.”

In December 2019, the U.S. government launched the whole- of-government “Growth in the Americas” or “America Crece” initiative. This initiative is a new approach to support economic growth in the Americas by encouraging public-private engagement, private sector investment in energy and infrastructure, sharing best practices, and creating opportunities to expand economic ties between the United States and Latin America.

The new U.S.-Mexico Canada Agreement (USMCA) finally went into force on July 1, 2020, a little more than three years after President Donald J. Trump announced his intent to renegotiate the North American Free Trade Agreement (NAFTA) in May 2017. Negotiations went through many rounds, with the United States and Mexico reaching a preliminary agreement in August 2018, while Canada and the United States reached an agreement later in October of the same year. The rebranded USMCA was signed on November 30, 2018 as President Trump called it the “most modern, up-to-date, and balanced trade agreement in the history of our country.”

Following steps outlined by the Trade Promotion Authority (TPA), the U.S. International Trade Commission released a report in April 2019 on how the new agreement will affect jobs and the economy. The report estimated that the USMCA would increase U.S. gross domestic product (GDP) by 0.35% or $68.2 billion and raise employment by 176,000 new jobs. The trade commission report also estimated that the agreement would have a positive impact on all broad industry sectors within the U.S. economy and that manufacturing and services would receive large gains.

In June 2019, Mexico became the first country to ratify the new USMCA deal. Canada moved its ratification process in tandem with approval of the agreement in the United States. In December 2019, the U.S. House of Representatives passed the USMCA by a vote of 385-41. The agreement was then finally passed by the U.S. Senate in mid-January 2020 and signed by President Trump on January 29, 2020. Canada ratified the deal on March 13, 2020. Mexico followed by ratifying the amendments that had been made during U.S. Congress negotiations on April 3, 2020. The USMCA finally went into force on July 1, 2020.

The United States, Canada and Mexico comprise more than 490 million people (6.5% of the world’s population), a $26 trillion GDP (18.3% of world GDP), and $6 trillion in trade (nearly 16% of global trade). Under NAFTA, the three USMCA countries’ bilateral goods trade totaled $1.22 trillion in 2019. California’s exports to the USMCA countries totaled $44.66 billion the same year.

• The U.S.-Chile Free Trade Agreement (FTA) entered into force in 2004, eliminating tariffs and opening markets and in 2015 allowed all goods originating in the United States to enter Chile duty free. Since the implementation of the FTA, U.S. goods exports to Chile have increased more than 470%. Chile is the 20th largest export partner of the United States with exports totaling $15.7 billion in 2019. In 2018, Chile was the fifth fastest growing source of foreign direct investment (FDI) into the United States, totaling $3.48 billion that year. California exports to Chile totaled $1.1 billion in 2019.

• The U.S.-Central American Free Trade Agreement (U.S.-DR-CAFTA) was signed by President George W. Bush in 2005 with the governments of El Salvador, Guatemala, Nicaragua, Honduras and the Dominican Republic, implementing the agreement in March 2007, followed by Costa Rica in 2008

• The U.S.-Colombia Trade Promotion Agreement was signed by President Bush in 2006. It was approved by the Colombian Congress in 2007, but not approved by the U.S. Congress until 2011 and entered into force in May 2012.

The new deal covers trade facilitation, goods regulatory practices and anti-corruption, and features a chapter on small and medium-sized enterprises. The United States exported $5.5 billion worth of goods to Ecuador in 2019 and imported $6.95 billion the same year. California is one of the top five exporting states to Ecuador, exporting $727 million of goods in 2019.

• The U.S.-Panama Trade Promotion Agreement went into effect in October 2012. The agreement significantly increased the ability of American companies to export their products to one of Latin America’s fastest-growing economies. Half of U.S. agricultural goods became duty free at the time, with all tariffs on industrial goods to be eliminated by the 10-year anniversary and most of the remaining tariffs on agricultural goods to be eliminated by the 15-year anniversary. In 2019, the United States exported $7.7 billion to Panama, making it the 35th largest U.S. export partner. California exported $518 million worth of goods to Panama in 2019.

During a March 2020 meeting, President Trump and President Jair Bolsonaro of Brazil instructed their trade officials to deepen discussion of a bilateral trade agreement in order to strengthen the two countries’ bilateral economic partnership. In April 2020, trade officials agreed to accelerate ongoing trade discussions under the Brazil-U.S. Commission on Economic and Trade Relations (ATEC) with a goal of concluding an agreement on trade rules and transparency before the end of the year.

An agreement reached in October 2020 updated the 2011 ATEC with three new annexes that included state-of-the-art provisions on customs administration and trade facilitation, good regulatory practices, and anticorruption. The United States and Brazil plan to continue discussions on how to increase trade and further investment between the two countries.

Brazil is the ninth largest export destination of U.S. goods, with exports totaling $43.08 billion in 2019. The United States imported $30.8 billion of Brazilian goods the same year. Brazil is California’s 25th largest export destination; California exported $1.3 million to Brazil in 2019. The United States was the first country to recognize Brazil’s independence in 1822, representing a long well-established diplomatic relationship between the two countries. A U.S.-Brazil CEO forum, originally established in 2007, was reinvigorated in November 2019 and now meets regularly.

It is expected the Biden administration will continue to engage with Mexico and Canada, together with the nation’s trade and investment partners in Latin America.

California Chamber of Commerce support for the USMCA and other FTAs in the Americas is based on an assessment that they serve the employment, trading and environmental interests of California, the United States, and our partner FTA countries, and are beneficial to the business community and society as a whole.

The objectives of the trade agreements are to eliminate barriers to trade, promote conditions of fair competition, increase investment opportunities, provide adequate protection of intellectual property rights, establish effective procedures for implementing and applying the agreements and resolving disputes, and to further regional and multilateral cooperation.