California Housing: 2022 and Beyond

California Housing: 2022 and Beyond

California remains deeply mired in a housing crisis driven largely by decades of policies that have stifled housing production. The ongoing crisis continues to exacerbate inequality in the state as more Californians are priced out of their neighborhoods, forced to spend more income toward housing or rent, and move farther from

and commute longer to and from their job centers, or decide to leave the state entirely. Homeownership has proven to be one of the most important components of building long-term wealth for families, yet the dream of home ownership becomes harder every year for Californians.

The COVID-19 pandemic greatly accelerated changes already taking place in the marketplace, including a record number of workers telecommuting and an exodus of workers from expensive cities. Perhaps what accelerated most from the pandemic was California home prices. The median home price in the Golden State is forecast to rise more than 5% to $834,400 in 2022, following a projected 20.3% increase in 2021. High demand and continued low supply will continue to put upward pressure on prices. However, the shift in housing demand to more affordable areas as remote working continues to grow could help to keep prices in check and prevent the statewide median price from rising too fast in 2022, according to the California Association of Realtors housing and economic forecast. 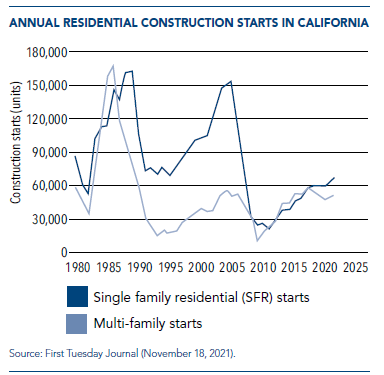 The Department of Housing and Community Development estimates California needs upwards of 200,000 housing units per year just to meet current demand. But to overcome the existing housing deficit, many experts agree the state needs roughly 3.5 million new housing units — a number Governor Gavin Newsom promised to overcome during his 2018 campaign.

Unfortunately, California saw a decline in the number of housing units built in 2020, with a particular falloff in multifamily units. The bright spot for California is that after back-to-back years of decline, residential construction is up 20% from last year, while multi-family construction is up 21%. Still, much more must be done by the Legislature and Governor to meaningfully address California’s ongoing housing crisis.

Expectations were high in 2020 that the California Legislature would deliver a plethora of pro-housing bills to help alleviate the crisis and meaningfully address the growing homeless population. Unfortunately, of the more than 100 housing bills introduced in 2020, only a handful ever made it to the Governor’s desk.

The start of a new session provided the Legislature with another opportunity to try again on several housing bills.

In 2020, eight bills introduced in the Assembly proposed to lower development impact fees for housing projects. All of them failed. But in 2021, the Legislature tried again — and this time with more success.

The California Legislature passed a number of COVID-19-related housing bills. Most notable were AB 3088, SB 91 and AB 832, intending to help renters financially struggling due to COVID-19-related hardships stay in their units and landlords to receive rental income

What Legislature Should Address in 2022 Relating to Housing

Legislation signed into law in 2013 (SB 743; Steinberg; D-Sacramento; Chapter 386) directed the Governor’s Office of Planning and Research (OPR) to develop a new approach to measuring transportation impacts for projects under the

The problem is, as local lead agencies began complying with the regulations, extremely high-cost estimates for VMT mitigation became alarmingly clear. For example, San Diego County estimated VMT mitigation for new housing would range from $50,000 to $900,000 per new unit of housing, depending on how far the new units were from major transit. Homes built farther from major transit saw the highest mitigation fees applied.

Unfortunately, OPR’s regulations apply a one-size-fits-all VMT standard over all new housing construction in California. OPR looks at the state’s transportation sector as it was, almost a decade ago when SB 743 was passed, rather than where the state is going. Executive Order N-79-20 underscores California’s trans- portation sector is expeditiously heading toward zero emissions over the next decade.

The efficacy of a VMT-focused land use planning that adds significant costs to each new unit of housing should be re-evaluated by the Legislature in light of an ongoing and growing affordability and homelessness crisis. At a minimum, the Legislature could amend the law to further clarify that the VMT as a metric for analyzing transportation impacts should apply only to “transit priority areas” in California.

CEQA is not the sole cause of the housing shortage, but often is a major impediment to housing development in California.

CEQA requires local governments to conduct a detailed review of discretionary projects prior to their approval. CEQA protects human health and the environment by requiring lead agencies to analyze project impacts and then require project developers to mitigate any potentially significant environmental impacts.

But unlike most environmental laws and regulations in California, CEQA is enforced through private litigation. The law enables litigation abuse that can substantially slow or even stop housing projects when opponents do not want added density in their neighborhood.

As a result, approximately two-thirds of the cities and counties in California’s coastal metropolitan areas have adopted growth control ordinances that limit housing development. These growth control ordinances are effective at limiting growth and consequently increasing housing costs. One study found that each additional growth control policy a city adopted correlated to a 3% to 5% increase in home prices. And even where local offi- cials do not bend to community pressure, California’s initiative process provides active residents with the ability to circumvent their local officials and intervene in local land use decisions via the initiative and referendum process.

CEQA can add significant cost and time to the housing development process. Even the threat of litigation, which is never reflected in data regarding CEQA abuse, is highly effective at discouraging or raising the costs of development. And because housing costs are ultimately borne by future home buyers, CEQA inevitably increases housing prices in California even if the project is never challenged.

California’s cost of housing increased significantly the same decade in which the California Legislature passed CEQA and community resistance to new homes got stronger. According to a report from the Legislative Analyst’s Office, California home prices went from 30% above U.S. levels to more than 80% higher between 1970 and 1980.

Although there were several failed attempts to amend, stream- line or expand CEQA in 2020, there were no serious attempts to reform CEQA in the 2021 session. SB 950 (Jackson; D-Santa Barbara), which the sponsor touted as “CEQA 2.0” to bring the statute into the 21st century, remains the last attempt by the Legislature. At that time, the California Chamber of Commerce led a coalition to defeat the bill, labeling it a job killer because it proposed amendments that would have substantially expanded CEQA to create onerous translation requirements, amended CEQA’s intent language to incorporate environmental justice, removed bond protections for middle class housing, and changed the Elections Code to override a California Supreme Court decision in order to apply CEQA to certain qualified ballot initiatives.

In contrast, housing developments generally do not produce sales or hotel tax revenues directly and the state’s cities and coun- ties typically receive only a small portion of the revenue collected from the property tax. As a result, cities and counties often incentivize commercial developments by zoning large swaths of land for these purposes and by offering subsidies or other benefits to the prospective business owners. Opposed by the CalChamber, Proposition 15 on the November 2020 ballot was defeated, but a split roll property tax has been proposed for the 2022 California ballot. Successful split roll measures would further incentivize local governments to favor commercial development over residential and substantially raise costs on businesses.

California’s historic budget surplus provided the Governor with a unique opportunity to allocate substantial fiscal resources toward housing and homeless programs. Notably, the budget apportions a record $10 billion for numerous housing programs and $12 billion through 2023 for programs aimed at addressing the state’s growing homeless population.

It should be noted that the housing crisis stems from several major problems, namely a lack of supply sufficient to meet housing demand. Accordingly, while this funding is important, the state cannot spend its way out of the crisis. The housing supply developed by private markets must increase to meet demand.


Housing and Land Use Bills