• Global trading system was a source of flexibility, diversification and strength during the pandemic. 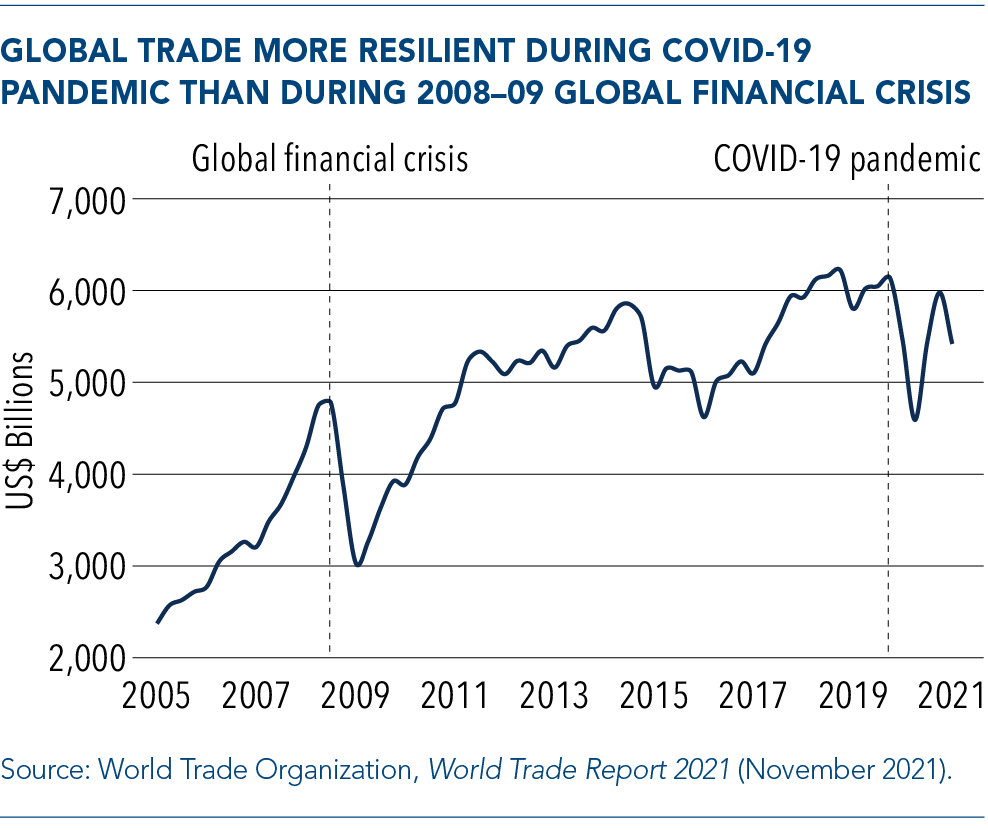 The World Trade Organization (WTO) is the only global international organization dealing with the rules of trade between nations. Its main function is to ensure that trade flows as smoothly, predictably and freely as possible. At its heart are the WTO agreements, negotiated and signed by the bulk of the world’s trading nations, and ratified or approved in their parliaments or legislatures. The goal is to help producers of goods and services, exporters and importers conduct business.

In 1994, the U.S. Congress approved the trade agreements resulting from the Uruguay Round of multilateral trade negotiations under the auspices of the General Agreement on Tariffs and Trade (GATT). The agreement liberalized world trade and created a new WTO, effective January 1, 1995, succeeding the 47-year-old GATT.

The GATT had been created in 1948 to expand economic activity by reducing tariffs and other barriers to trade. The Uruguay Round agreements built on past successes by reducing tariffs by roughly one-third across the board and by expanding the GATT framework to include additional agreements.

The WTO is a multilateral treaty subscribed to by 164 governments, which together account for the majority of world trade (with more than 20 nations negotiating their accession).

The basic aim of the WTO is to liberalize world trade and place it on a secure foundation, thereby contributing to economic growth and development, and to the welfare of people around the world. The functions of the WTO are:

• providing a forum for trade negotiations;

• offering technical assistance and training for developing countries; and

• cooperating with other international organizations.

The ultimate goal of the WTO is to abolish trade barriers around the world so that trade can be totally free. Members have agreed to reduce, over time, the most favored nation duty rates to zero — along with abolishing quotas and other nontariff barriers to trade. There are more than 60 agreements dealing with goods, services, investment measures and intellectual property rights.

Part of the Uruguay Round agreements creating the WTO requires the White House to send a report to Congress evaluating U.S. membership in the organization every five years. Following the report, members of Congress may introduce legislation opposing U.S. membership.

Successful multilateral negotiating rounds have helped increase world trade; the WTO estimates the 1994 Uruguay Round trade deal added more than $100 billion to world income. The World Bank estimates that new successful world trade talks could bring nearly $325 billion in income to the developing world and lift 500 million people out of poverty. Other studies have shown that eliminating trade barriers would mean $2,500 per year in increased income to the average U.S. family of four.

For U.S. businesses, successful implementation of WTO negotiations would translate to:

• reduced cost of exporting to some countries; and

• improvement in foreign customs procedures that currently cause shipment delays.

The WTO announced its new Director General on March 1, 2021, Ngozi Okonjo-Iweala, former finance and foreign minister of Nigeria, and the first woman, and the first African to serve in the position. Her term will expire on August 21, 2025. Director General Okonjo-Iweala inherited the WTO in a tough position, after the organization had been under scrutiny from the Trump administration and while the world continued to respond to and recover from the challenges of COVID-19. Under her leadership in 2021, the WTO continued to tackle COVID-19 issues with the rest of the world, largely focusing on vaccine intellectual property, response and distribution.

The WTO ministers had many other issues they faced in 2021 in addition to COVID-19, including fishery negotiations, supply chain challenges, agricultural discussions, and an e-commerce duty moratorium. These issues were scheduled to be discussed at the already-once-postponed 12th ministerial conference that was expected to be held in December 2021 in Geneva. Emergence of the new omicron COVID-19 variant, however, led to the meeting being postponed again. There is talk that the meeting may now be held in March 2022.

Throughout 2021, many countries continued to call for reform of the WTO’s dispute settlement system, to restore the Appellate Body, and new trade liberalization agreements. There were also calls for a new “rulebook” that reduces barriers and distortions in the international trading system, as many countries are questioning how to deal with China.

In August 2021, President Joe Biden nominated Maria Pagan to be the U.S. envoy to the WTO. The Biden administration has continued to express systemic concerns with the functioning of the Appellate Body. U.S. Trade Representative Katherine Tai, during a speech to the organization in Geneva in October, called for “new voices” and “new approaches” to move past old paradigms. Tai called on her peers to “change the way we approach problems collectively” and to “restore the deliberative function of the organization.” Pagan’s mandate when she arrives at the WTO will cover restoring the Appellate Body to what it was originally envisioned for and helping the organization succeed.

In 2022, it is anticipated that the WTO will finally be able to hold its 12th ministerial conference to address the many issues facing the organization. The ministerial was originally planned for June 2020 in Kazakhstan, then it was postponed and moved to Geneva with the understanding that Kazakhstan would serve as a co-host.

Pagan is still awaiting U.S. Senate approval to be the U.S. envoy to the WTO. It is hoped that she may be approved soon in 2022, as it is vital that the United States once again has representation at the international organization.

The California Chamber of Commerce is hopeful the major trading economies can reach consensus on a path forward for the WTO in 2022. The revamp should address the functioning of the Appellate Body, encourage greater transparency and enhance discipline for members who fall behind on reporting obligations.

The WTO is having a positive impact on how California producers of goods and services compete in overseas markets, as well as domestically, and is creating jobs and economic growth through expanded international trade and investment.

The WTO gives businesses improved access to foreign markets and better rules to ensure that competition with foreign businesses is conducted fairly.