• Trans-Atlantic trade and investment supports an estimated 16 million jobs on both sides of the Atlantic.

• The Trans-Atlantic economy accounts for half of total global personal consumption. 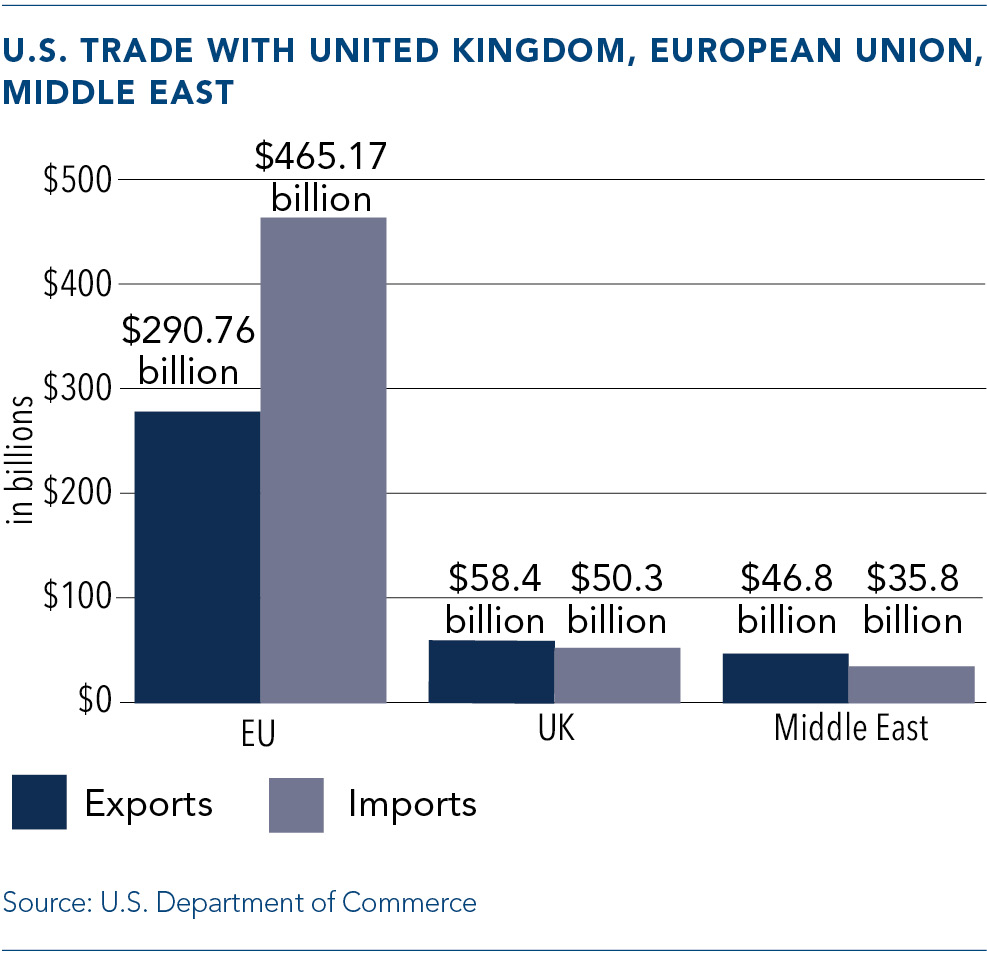 The United Kingdom ended a year-long transition period in 2020, finally officially leaving the European Union on January 1, 2021. At the end of 2020, the EU and U.K. entered into the EU-U.K. Trade and Cooperation Agreement, which formally went into force on May 1, 2021. The United Kingdom has since begun a campaign entitled “Global Britain.” The country has been on a whirlwind tour of entering into free trade agreements. The U.K. has begun the process to formally join the Comprehensive and Progressive Trans-Pacific Partnership Agreement (CPTPP, formerly the TPP).

The U.K. has also negotiated a deal with New Zealand and is hopeful for a U.S. deal in the near future.

The EU presidency rotates, with each member country taking turns for six months at a time as chair of EU meetings and representing the EU at international events.

In October 2018, then-U.S. Trade Representative Robert Lighthizer notified Congress, in keeping with Trade Promotion Authority (TPA) protocol, of the Trump administration’s intent to start negotiations with the European Union. Negotiating objectives published in January 2019 included removing tariff and nontariff barriers and creating more balanced, fairer trade. In 2021, the Biden administration held a U.S.-EU Summit where the two nations renewed their trans-Atlantic partnership. However, a U.S.-EU agreement has not yet been pursued by the Biden administration.

Total bilateral trade between the European Union and United States was more than $1 trillion in 2020, with goods trade accounting for $755.76 billion. The United States exported $290.76 billion worth of goods to EU member nations. The U.S. and EU are each other’s primary source and destination for foreign direct investment (FDI). The $3.6 trillion invested by the U.S. in the EU in 2018 represented 61% of total U.S. investment abroad; the EU investment of $3 trillion in the U.S. represents 68% of total FDI in the U.S. (AmCham Europe). California exports to the EU were $30.9 billion in 2020, making up nearly 20% of all California exports.

In December 2020, the EU announced a new “agenda for global change” between the EU and U.S., with the intention of creating a like-minded partnership in relation to China. The agenda outlined goals such as working together to solve bilateral trade irritants, leading reforms of the World Trade Organization, establishing an EU-U.S. Trade and Technology Council (TTC), finding solutions for a digital tax, and protecting technologies against global economic and security concerns. The EU-U.S. Trade and Technology Council had its inaugural meeting in September 2021. The outcomes from that meeting in Pittsburgh centered on investment screening, export controls, artificial intelligence, semiconductors, and global trade challenges. Another TTC meeting is expected in the first half of 2022.

In October 2021, the U.S. and EU came to an agreement to re-establish trans-Atlantic trade flows in steel and aluminum. Under the new agreement, the United States will not apply Section 232 duties and will allow duty-free imports of steel and aluminum from the EU at a historical-based volume. In return, the EU will suspend related tariffs on U.S. products.

The Biden administration inherited the U.S.-U.K. Free Trade Agreement that President Trump had initiated in October 2018. Negotiations were launched on May 5, 2020. Negotiating sessions amidst the coronavirus pandemic provided some challenges, so the U.S.-U.K. trade agreement was the first agreement to be negotiated virtually. The Biden administration did not continue the negotiations in 2021, and the agreement has been shelved until a later date.

The United States has five free trade agreements with countries in the Middle East, along with Trade and Investment Framework Agreements (TIFAs).

• The U.S.-Bahrain Free Trade Agreement (FTA), first enacted in 2006, is now responsible for $1.52 billion in bilateral trade, of which $885 million is U.S. exports to Bahrain. California is one of the top exporting states to Bahrain with $85.6 million in goods exported to Bahrain in 2020.

• The U.S.-Israel Free Trade Agreement was the first U.S. FTA. Since it entered into force in 1985, exports to Israel have increased by more than 450%. In 2020, Israel was the 26th largest export destination for U.S. exports, which topped $10.18 billion. In the same year, California exported $1.3 billion to Israel, making it the 25th largest export destination for California goods. Israeli FDI into the United States totaled $59.18 billion in 2020, while U.S. investment into Israel totaled $40.4 billion.

• The U.S.-Jordan Free Trade Agreement went into effect in 2010. In addition to increasing trade, the agreement also aimed to improve labor standards in Jordan. The United States is one of the largest exporters to Jordan, having exported $1.325 billion of products in 2020. The United States imported $1.8 billion worth of goods in 2020. California is the largest exporting state to Jordan, exporting $277.6 million worth of products in 2020.

• The U.S.-Morocco Free Trade Agreement entered into force in 2006 to support economic and political reforms in Morocco and give improved opportunities for U.S. exports to Morocco. In 2020, goods exports to Morocco totaled $2.3 billion, compared to $79 million in 2005, the year before the FTA went into force. The United States also is one of the largest importers of Moroccan goods, importing $1.047 billion in 2020. California exported $139.16 million worth of goods to Morocco in 2020 and imported $108.28 million the same year.

• The U.S.-Oman Free Trade Agreement enacted in 2009 continues to promote trade and investment liberalization and openness in the region. The United States exported $1.129 billion to Oman in 2020. Since the FTA took effect, California exports to Oman have nearly tripled, totaling $126.4 million in 2020.

The California Chamber of Commerce is hopeful that the United States and Trans-Atlantic region will continue to strengthen relations in 2022 to deepen the world’s largest trading and investment relationship, with a focus on trade and investment initiatives. The CalChamber supports the following issues being discussed during negotiations:

• liberalizing cross-border trade in services; and

Progress has been slow as to whether to include agriculture and tariffs in negotiations.

It also is hoped the Biden administration will continue to cultivate the trade and economic ties with U.S. strategic partners in the Middle East.

Free trade agreements can ensure that the United States may continue to gain access to world markets, which will result in an improved economy and additional employment of Americans.