• Region has seen an average annual economic growth rate around 6% over the last five years, prior to the COVID-19 pandemic.

• Re-engagement with region is imperative with growing international interest in the comprehensive agreement (CPTPP) and to counter China-led regional partnership (RCEP). 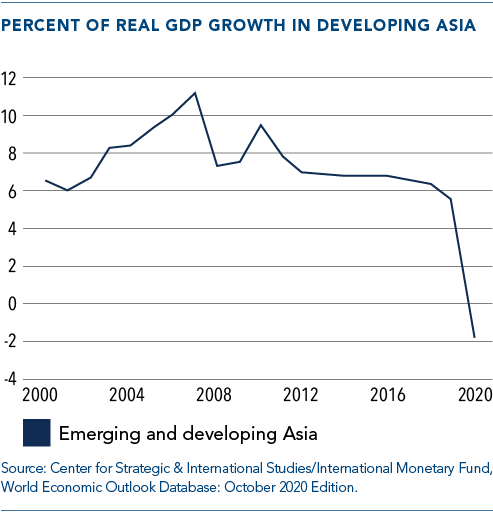 The Trans-Pacific region stretches from the west coast of the United States on the Pacific Ocean to the west coast of India in the Indian Ocean, connecting the two oceans through Southeast Asia. The region is made up formally of 14 countries: Australia, Bangladesh, Burma, India, Indonesia, Japan, Malaysia, New Zealand, Philippines, Singapore, South Korea, Taiwan, Thailand and Vietnam. China typically is considered separately when discussing the region. The Trans-Pacific region is one of the greatest current and future engines of the global economy.

The Trans-Pacific is the most populous, fastest-growing and most economically dynamic part of the world. By 2030, it will represent 66% of the world’s middle class, and 59% of all goods and services sold to middle class consumers will be sold in the Trans-Pacific. Developing nations in the region will need about $1.5 trillion in investment every year for the next decade in order to develop the infrastructure necessary to sustain their growth.

• U.S.-Korea Free Trade Agreement. In 2018, President Donald J. Trump renegotiated the U.S.-Korea Free Trade Agreement (KORUS), which originally entered into force in March 2012. The renegotiated deal went into effect on January 1, 2019 and included an extension to phase out U.S. tariffs on trucks, as well as harmonized vehicle testing requirements, Korean recognition of U.S. standards on parts, and improvements to fuel economy standards. There also were modifications to Korea’s customs and verification processes, and its pharmaceutical pricing policy.

South Korea is the seventh largest export partner for the United States and the fifth largest for California, exporting $51.2 billion and $9.78 billion, respectively.

Singapore has consistently ranked among the top countries for doing business, according to the World Bank, and is regional headquarters for hundreds of U.S. companies.

• U.S.-Japan Limited Trade Deal. The U.S. and Japan have a limited trade deal, which went into effect in January 2020. The deal opened market access for certain U.S. agricultural and industrial goods in Japan. The agreement helped to give American farmers and ranchers the same advantages as Comprehensive and Progressive Agreement for Trans-Pacific Partnership (CPTPP) countries selling into the Japanese market. In return, the United States reduced or eliminated tariffs on agricultural and industrial imports from Japan. A high-standard digital trade agreement also was reached separately but concurrently and went into effect in January 2020, as well.

In April 2021, the first foreign leader visit of his presidency, President Joe Biden met with then-Japanese Prime Minister Yoshihide Suga. The two renewed the U.S.-Japan alliance, dubbing it a “global partnership for a new era” and stating that the alliance is “prepared more than ever to address regional challenges.”

In November 2021, U.S. Trade Representative Katherine Tai and U.S. Department of Commerce Secretary Gina Raimondo traveled separately to Tokyo, where the U.S. and Japan agreed to establish a new Japan-U.S. Commercial and Industrial Partnership on trade. The two countries will collaborate more closely on trade issues, including labor, the environment, digital commerce, and confronting other countries. The U.S. and Japan are expected to start meeting regularly in 2022 to address bilateral areas of concern. This new partnership is part of the Biden administration’s plan for an Indo-Pacific economic framework.

Japan is the fourth largest export partner of the U.S. and the fourth largest export partner for California; exports total $64.09 billion and $10.65 billion, respectively. Japan is one of the largest markets for U.S. agricultural products. The country also is the largest investor into California through foreign-owned enterprises as of 2020. The Japanese and U.S. markets together cover approximately 30% of global gross domestic product (GDP). The trade deal is an important step in furthering the long-shared partnership between the U.S., Japan and California.

• U.S.-Taiwan Trade. The United States and Taiwan first signed a Trade and Investment Framework (TIFA) in 1994. Under the previous administration in 2020, the U.S. showed more support for Taiwan and a possible trade agreement with Taiwan, relaxing some regulations in order to show good faith in starting talks. Support for a trade agreement is popular among some in the U.S. Congress. In September 2021, Taiwan applied to join the Comprehensive and Progressive Trans-Pacific Partnership Agreement (CPTPP), a move that is importance to the country’s long-term economic growth and stability in the region. Taiwan was notably left out of the China-led Regional Comprehensive Economic Partnership (RCEP).

China, the Association of Southeast Asian Nations, and the Regional Comprehensive Economic Partnership

After many rounds of tariffs on each other’s goods, China and the United States signed a Phase One Agreement on trade on January 15, 2020. This historic agreement required structural reforms and changes to China’s economic and trade model, including intellectual property, technology transfer, agriculture, financial services, and currency and foreign exchange. The Phase One Agreement also included a commitment by China to purchase U.S. agricultural goods. The commitment fell to the wayside during the global COVID-19 pandemic, reaching only 60% of the target by September 2021. U.S. Trade Representative Katherine Tai continues to hold China accountable to the Phase One agreement. As of November 2021, Tai is exploring weaknesses in China’s performance and is reported to be gaining traction. The Biden administration continues to use Section 301 tariffs as part of its strategy to compete more effectively with China.

While China and the United States have a complex relationship, China’s relationship with Association of Southeast Asian Nations (ASEAN) countries continued to grow deeper in 2021 as more countries ratified the Regional Comprehensive Economic Partnership (RCEP) deal, which was signed on November 15, 2020 after almost a decade of negotiations. The RCEP deal went into force on January 1, 2022 and encompasses the 10 member nations of the ASEAN, as well as China, Japan, South Korea, Australia and New Zealand. The RCEP deal will cover nearly one-third of the global population and about 30% of global GDP, making it the largest trading bloc in the world.

The nations in ASEAN, established in 1967, have the goal of creating an ASEAN economic community (AEC) by 2025. The region’s combined GDP topped $3 trillion in 2020. AEC already has eliminated 99% of intra-ASEAN tariffs and continues to strive for deeper economic integration.

The original Trans-Pacific Partnership (TPP) was signed in February 2016 and included the United States as a member. Once President Trump took office, however, he pulled the United States out of the TPP. The remaining countries formed the (CPTPP), which then came into force on December 30, 2018 for Australia, New Zealand, Canada, Japan, Mexico and Singapore, followed by Vietnam on January 14, 2019, and Peru in August 2021. Brunei, Chile, and Malaysia will begin 60 days after they complete their ratification process.

The CPTPP agreement retained all the tariff reductions and eliminations from the original version signed in 2016; however, it suspended 22 other provisions, including some intellectual property rules. The CPTPP will reduce tariffs in countries that together amount to more than 13% of the global economy — a total of $10 trillion in GDP. With the United States, the agreement would have represented 40% of the world economy. Even without the United States, the deal will span a market of nearly 500 million people, making it one of the world’s largest trade agreements.

In 2021, the United Kingdom announced its intent to apply for membership to the CPTPP and began talks in September. In September, China also submitted an application to join CPTPP, preempting Taiwan’s own bid six days later. The dueling bids have created opposing sides within the trading bloc; the outcome remains to be seen. Meanwhile, South Korea has also expressed interest in the possibility of joining the CPTPP.

With the new applications to the CPTPP, there is a renewed push for the Biden administration to consider re-entering the agreement. U.S. engagement in the region is critically important to counter China’s influence and potential addition to the agreement, as well as the China-led RCEP. In October 2021 at the East Asia Summit, President Biden announced his administration’s plans to develop an Indo-Pacific framework. Re-engagement in the TPP/CPTPP could be beneficial for California, which in 2020 exported almost $63.18 billion to the CPTPP member countries.

The California Chamber of Commerce is hopeful that the Biden administration will continue to develop relations in the Trans-Pacific and strengthen partnerships within the region — including consideration of multilateralism rather than bilateralism.

In 2022 in partnership with our regional allies, the Biden administration will develop a new Indo-Pacific framework, which is not expected to take the form of a traditional free trade agreement, and thus will not require congressional approval. The U.S. expects the “flexible and inclusive” framework to set standards in digital areas like cybersecurity and privacy, address infrastructure investments, clean energy, and export controls. U.S. Secretary of Commerce Gina Raimondo expects to negotiate the framework with Indo-Pacific nations within an aggressive timeline of 12 months.

The Trans-Pacific region represents nearly half of the Earth’s population, one-third of global GDP and roughly 50% of international trade. The large and growing markets of the Trans-Pacific already are key destinations for U.S. manufactured goods, agricultural products, and services suppliers.

Following the U.S. withdrawal from the Trans-Pacific Partnership, a highlighted Trans-Pacific relationship is welcomed, as this is a key area in geopolitical, strategic, and commercial terms.