New Zealand, whose capital city is Wellington, is a constitutional monarchy with a parliamentary democracy.  It is approximately the size of Colorado and has a population of roughly 4.88 million.  The county is divided into two major islands.  The North Island is home to approximately 78 percent of the population while the South Island boasts a larger land mass with varied topography from deep fjords to many steep mountain peaks.
U.S. Department of State 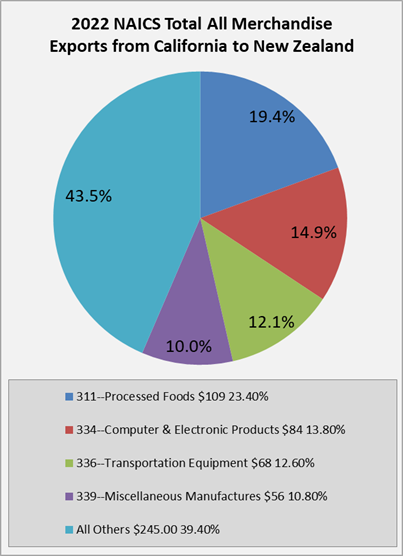 New Zealand has been ranked as the second best country to do business in the world by the World Bank “Doing Business 2015” report. According to the most recent figures, New Zealand has a GDP of $166.1 billion.

Characteristics of travellers from New Zealand to California – 2012
Visit California

Members of the U.S. Congress have requested negotiations for a Free Trade Agreement with New Zealand. New Zealand and the United States have been strong partners and good friends for over a century. Political ties are close, business links are strong, and cultural links are many and varied.

In the aftermath of September 11, New Zealand Prime Minister Clark quickly and firmly offered diplomatic, political, and military support. New Zealand is one of only two countries that has fought side-by-side with America in every war since World War I.

New Zealand is one of America’s strongest allies in international trade liberalization. New Zealand has worked consistently with the United States in trade forums, such as the WTO and APEC.

The Trans-Pacific Strategic Economic Partnership Agreement (TPP) was signed by New Zealand, Chile, Singapore and Brunei in the summer of 2005.

One of the objectives of the Trans-Pacific Agreement is to create a trade agreement that could be seen as a model within the Asia-Pacific region and could potentially attract new members. The agreement is open to accession “on terms to be agreed among the parties, by any APEC economy or other state”.

On November 14, 2009, during his first trip to Asia as President of the United States, President Barack Obama announced the United States’ intention to engage with the Trans-Pacific Partnership countries to shape a regional agreement, with the objective of shaping a high-standard, broad-based regional pact helping to expand U.S. exports, saving and creating good U.S. jobs.

In November 2011, at the APEC meetings in Hawaii, Japan, Mexico and Canada expressed interest in joining the Trans-Pacific Partnership negotiations and were welcomed by the US.

The Consul General discussed California and New Zealand trade, as well as the Trans Pacific Partnership and the possibility of a U.S. – New Zealand Free Trade Agreement.