Brunei Darussalam is a high income and well educated country in Southeastern Asia. Brunei has a population of 433,285 people and a gross domestic product (GDP) of $13.46 billion, which makes it one of the highest GDPs per capita in the world. Brunei was a British protectorate until independence in 1984 and has vast natural gas and petroleum fields. In fact, Brunei’s largest exports are mineral fuels and organic chemicals. World Bank

The United States is Brunei Darussalam’s 4th largest exporter of goods. The US exported approximately $119 million worth of goods to Brunei in 2020. In 2020, 49.2% of US exports to Brunei was non-electrical machinery, which was valued around $58.5 million. Other major US exports to Brunei fall under the categories of transportation equipment, special classification provisions, and computer and electronic products. US Department of Commerce 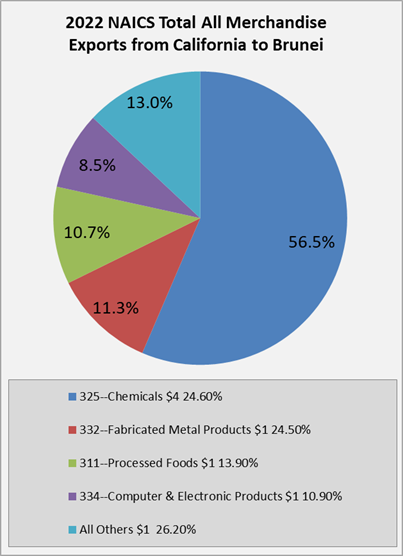 Brunei exports heavily to other countries in the Pacific that are closer geographically; including, Japan, South Korea, and Australia. Nevertheless, in 2020 the US imported approximately $83 million worth of goods from Brunei, one of the highest in the past decade due to new imports of petroleum and coal products that made up 70% of the total. Other imports included reimports, apparel manufacturing products, and primary metals. US Department of Commerce

U.S. FDI into Brunei totaled $15 million in 2019 and FDI from Brunei into the U.S. totaled $758 million in the same year (Bureau of Economic Analysis).

In the United States, California is one of 10 exporting and importing states to Brunei. In 2020, California exported roughly $5.8 million of goods to Brunei. Non-electrical machinery made up 24.6% of total exported goods from California to Brunei. Followed by food manufactures, computer products, and fabricated metals.  California imported $49.6 million worth of goods form Brunei in 2020, the most the state has imported for over a decade. The main import was petroleum and coal products which made up 99.3% of the total. US Department of Commerce

Brunei has promoting private-sector influence in the economy, due to their major reliance on oil and gas. Brunei is attempting to stimulate growth through possible trade agreements and diversification of their economy.

The Trans-Pacific Partnership was signed by the participating countries, including the US and Brunei Darussalam, on February 4th, 2016. The deal signed in Auckland, New Zealand sets the rules for global trade in the Pacific region. The partnership aims to promote economic growth through the liberalization of trade, and create new opportunities for businesses and workers. For the U.S. specifically, TPP promises to bring American economic progress through increases in exports of American products, the creation of more American jobs, and overall benefits to the middle class. TPP would eliminate over 18,000 taxes on American manufactured products and include strong environmental and worker protections in the agreement.