Vietnam is a nation of 96.4 million people and the 15th most populated country in the world. With a GDP of $261.9 billion, the economy is growing and the volume of foreign trade has been increasing. Vietnam is a member of the World Bank, the International Monetary Fund, Asian Development Bank, World Trade Association, Association of Southeast Asian Nations (ASEAN), and the Asia-Pacific Economic Cooperation (APEC).  Vietnam is also one of the 12 nations in the recently negotiated Trans-Pacific Partnership. Vietnam’s top priorities for investments are manufacturing and infrastructure projects, telecommunications, oil and gas development, agricultural production and tourism. 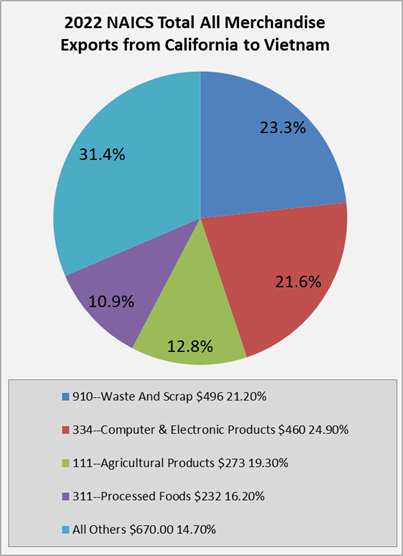 Two-way trade between the United States and Vietnam was approximately $89.62 billion in 2020, up from $77.56 billion in 2019. The United States exported $9.98 billion to Vietnam in 2020, with top categories being computer and electronic products, agricultural products, chemicals, and food manufactures. In 2020 imports from Vietnam totaled $79.645 billion, up significantly from $66 billion in 2019. Top import categories included computer and electronic products, apparel articles, furniture, and leather products.  (US Department of Commerce)

In 2019, the U.S. invested nearly $2.6 billion into Vietnam, while Vietnam invested $11 million into the U.S. the same year. (Bureau of Economic Analysis)

Vietnam is California’s 19th largest export destination. Computer and electronic products held 24.9 percent with $356 million of total exports. Waste and scrap held 19.3% with $275.8 million. Agricultural products with $232 million and 16.2 percent, and food manufactures with $209.5 million and 14.7 percent. Imports to California from Vietnam totaled $20.18 billion in 2020. Computer and electronic products made up 29% of total imports, this was followed by apparel manufacturing products, leather products, and furniture and fixtures at 15.5%, 13.4%, and 12.9%, respectively.

According to the California Wine Institute, Vietnam is the ninth largest export destination for California wines, consuming $20 million in 2014, up 55% from the previous year.

Vietnam’s bid for membership in the World Trade Organization was approved on November 7, 2006. This follows nearly a decade of negotiations between Vietnam and WTO members and economic preparation on the part of the Vietnamese government. “Vietnam has shown how anchoring domestic reforms in the WTO can yield dramatic results,” commented Director General Lamy. The United States Congress passed measures (H.R. 6111 in the Senate and H.R. 6406 in the House of Representatives) granting Vietnam Permanent Normal Trade Relations Status (PNTR) on December 8-9, 2006. The CalChamber supported Vietnam’s membership in the WTO. Both California senators and 19 California representatives voted for PNTR. This means that the US benefits from the trading concessions Vietnam has made as part of its WTO membership.

The trade embargo against Hanoi was lifted in 1994. In 1995, the United States and Vietnam established diplomatic relations. The U.S. Embassy in Hanoi was reopened in 1996. Since 1998, the President was granted the annual “Jackson-Vanik” waiter for Vietnam, allowing U.S companies to operated in Vietnam with access to the federal trade-facilitation agencies, including the Export-Import (Ex-Im) Bank of the United States, which helps finance U.S. exports; the Overseas Private Investment Corporation (OPIC), which insures U.S. investors against political risks; and the Trade Development Agency (TDA), which promotes U.S private sector participation in overseas infrastructure and industrial projects.

In November 2000, President Bill Clinton was the first U.S. president to visit a unified Vietnam.

On July 13, 2000, the United States and Vietnam signed a historic trade agreement. The agreement was approved by the House on September 6, 2001 and by the Senate on October 3, 2001, and was signed by President George W. Bush. On November 28, 2001, the Vietnam National Assembly voted 278-85 to approve the agreement.

The U.S. Vietnam Bilateral Trade Agreement has benefited U.S. businesses, sharply reduced tariffs on U.S goods and services, protected intellectual property and improved investment relations between the two counties. Vietnam was granted access to the U.S market under the same system of law tariffs accorded almost every other nation in the world, following Congress’ approval of normal trade relations (NTR) status on an annual basis. According to the U.S. Embassy in Vietnam, the “BTA is the most comprehensive trade agreement Vietnam has signed to date.”

This partnership has been strengthened by the July 2015 U.S. – Vietnam Joint Vision Statement, during Vietnam President Truong Tan Sang’s visit to the White House.

During that July 2015 visit, the United States and Vietnam recognized the positive and substantive developments in many areas of cooperation over the past 20 years since the establishment of diplomatic relations, particularly the growth in economic and trade cooperation, cooperation in addressing war legacy issues as well as in science and technology, education, healthcare, environment, response to climate change, defense, security, human rights, and increasing regional and international cooperation on issues of mutual concern.

The partnership was further strengthened by the May 2016 Joint U.S. – Vietnam Statement during President Obama’s visit to Vietnam.

Vietnamese Ambassador Pham Quang Vinh visited California on Tuesday, October 20 in an effort to boost trade with California. One of his stops included a visit to the California Chamber of Commerce, where he discussed future hopes for California and Vietnam’s economic relationship as well as Vietnam’s support for the Trans-Pacific Partnership.