Australia has a market economy with a gross domestic product (GDP) of $1.39 trillion and a population of 25.36 million. World Bank. 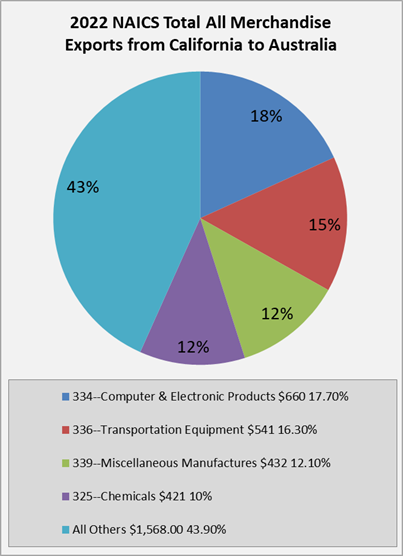 In addition to being a large exporter of natural resources, energy, and food, Australia also has a significant service sector. Imports to the U.S. from Australia totaled $14.4 billion in 2020. Primary metals and food manufactures which made up over half the total combined, totaling $5.36 billion and $2.87 billion, respectively. This was followed by chemicals and reimports.

As the 16th largest export destination for the U.S., Australia has always enjoyed a strong trade relationship and a diverse portfolio with the U.S. In 2020, total exports were $23.48 billion with top categories being non-electrical machinery, chemicals, transportation equipment, and computer and electronic products.

Australia’s total FDI stock into the US totaled $86.5 billion in 2019 supporting 86,500 jobs in the US in 2018. $182 million was invested in research and development and $3.7 billion went to expanding US exports. The top industry sectors that were recipients of Australian FDI were: software and IT services, healthcare, business services, communications, financial services, and textiles. SelectUSA

In 2020, Australia was the 14th largest importer of California goods and services. California exported approximately $3.2 billion to the country, making it the largest exporter to Australia. The largest export category from California was transportation equipment  making up 17.7% of the total, with computers and electronic products following next with 16.3% of the total. Other top export categories include chemicals and food manufactures totaling 12.1 percent and 10 percent, respectively.

Imports to California from Australia totaled $2.2 billion in 2020. Top imports were food manufactures at $750 million and 34% followed by primary metal manufacturers at $491 million and 22.3%.

Australia is actively involved with Asia-Pacific Economic Cooperation (APEC) as well as engaged in the Trans-Pacific Partnership talks in an effort to lower barriers to trade.

On January 1, 2005, the U.S.-Australia Free Trade Agreement came into effect. The agreement eliminates tariffs on 99 percent of U.S. manufactured goods exported to Australia, accounting for 93 percent of all U.S. exports to the nation.

(August 13, 2008) California trade relations with the Australian state of Victoria were among the topics discussed during a recent meeting at the California Chamber of Commerce.

Victoria—which is located in southeast Australia—is home to 5 million people with 3.6 million living in the capital city of Melbourne. In 2007, the United States exported $19.2 billion worth of goods to Australia, a 35 percent increase since 2004, the year before the U.S.-Australia Free Trade Agreement (FTA) went into effect.