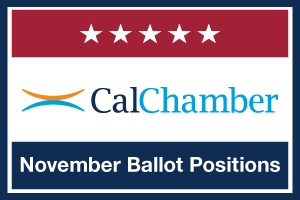 The California Chamber of Commerce Board of Directors has taken the following positions on two upcoming ballot measures:

Placed on the November 3, 2020 ballot by legislative measure ACA 5 (Weber; D-San Diego), Proposition 16 repeals Section 31 of Article 1 of the California Constitution, which establishes a prohibition on state and local government programs and preferences, based on race or gender or national origin, for hiring, contracting and admission into public higher education institutions.

The CalChamber Board of Directors based its decision to support Proposition 16 on the need to improve diversity and opportunity in California’s public workforce and educational institutions.

Appearing as Proposition 23 on the November 3, 2020 ballot, The Protect the Lives of Dialysis Patients Act mandates that each of the roughly 600 dialysis clinics in California have a physician on the premises during all operating hours, in a non-caregiving role.

The CalChamber Board of Directors based its decision to oppose the measure based on the fact that, if passed, Proposition 23 would drive up the cost of health care and reduce care options for sick patients.

A study by the Berkeley Research Group found the measure’s physician requirement would increase dialysis treatment costs by $320 million every year. According to the independent, non-partisan Legislative Analyst, this provision would result in “Increased state and local health care costs…resulting from increased dialysis treatment costs.” These increased costs will be passed on to all Californians in the form of higher insurance premiums and higher taxes for government-sponsored health care.

The CalChamber Board of Directors previously voted to: