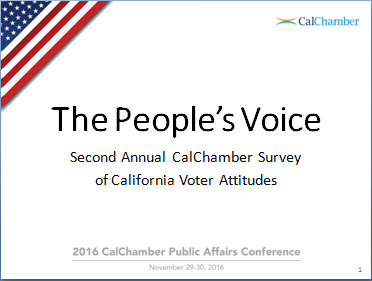 The Second Annual CalChamber Survey, released this week, indicates that the state’s voters believe there are some homegrown issues that deserve the attention of California legislators.

Given a choice among about 20 issues, nearly 9 in 10 voters believe that Sacramento officials are not spending enough time on fixing roads, highways and bridges in California. Eight in 10 voters believe state leaders should be working harder to encourage economic development to attract new businesses to California, and about three-quarters of voters want to see more attention paid to addressing high housing costs.

On the other hand, a majority of voters believe state elected officials are spending too much time providing tax credits to purchase electric cars (53%) and completing high speed rail (64%).

Voters continue to give low marks to transportation infrastructure. Fully 42% believe the repair and maintenance of roads, highways and bridges is poor and another 37% believe their condition is only fair. Only one in five voters rate transportation conditions as good (15%) or excellent (5%).

But even considering their poor perception of road and highway conditions, only 20% of voters believe additional funds are needed to address road maintenance issues, while 80% believe current funds need to be managed better.

Among voters with children living at home, two-thirds believe their kids’ generation will have a harder time purchasing their first home in California compared to their parents’ generation. Only a third of parents thought home purchase would be easier.

And while a majority of voters agree that state leaders should be addressing global warming, a strong majority (56%) opposes new greenhouse gas reduction standards on new housing developments that would add significant costs to the price of housing.

Drought concerns are top of mind for California voters. Three out of 4 voters believe the Legislature is not spending enough time dealing with the drought. By a similar margin (77%), voters say the drought represents “a new reality for California,” as opposed to only a “short-term problem.” This concern has only increased over the past year.

Californians are still insecure about California’s economic future. Of voters with children living at home, nearly 6 in 10 agree that “my children will have a better future if they leave California.”

And while the San Francisco Bay Area enjoys new job creation, much of the rest of the state views a different reality.

A similar geographic profile is evident when drilling down into this issue. For those voters who agreed that “a lot” or “some new” jobs were being created in their part of California, regional differences arose on the nature of those jobs. Voters statewide were evenly split as to whether the new jobs created were “dead end and not middle class” or “higher pay and middle class.” But in the Bay Area, twice as many voters thought these jobs were high pay/middle class as thought they were dead end. Voters agreed that new jobs were dead end and not middle class in Orange/San Diego (53%), Central Valley (72%) and the Inland Empire (75%). By a slight majority (52%), Los Angeles voters thought new jobs were higher pay and middle class.

The CalChamber poll was conducted by Penn Schoen Berland with online interviews from November 15 – 17, 2016 among 1,000 definite California 2018 general election voters. The margin of error for this study is +/- 3.09% at the 95% confidence level, and larger for subgroups.