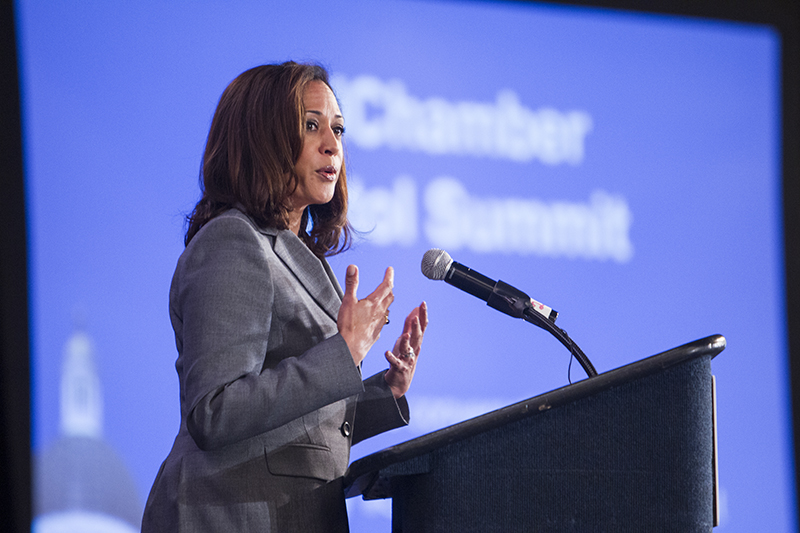 Working in collaboration with the private sector enabled the Department of Justice (DOJ) to develop a plan for dealing with the privacy issues related to early mobile applications, Harris said at the CalChamber Capitol Summit in Sacramento.​

Over six months, the Office of the Attorney General and six major online providers arrived at what Harris called an “all-too-rare” example of industry and government coming together to solve a problem.

Increased collaboration like this is very exciting and one of the only ways the state will be smart in having good public policy, Harris said. Litigation, regulation and legislation result in slow and inaccurate solutions to technology crimes, she said.

Returning to the subject of data breaches, Harris urged listeners to consult the best practices outlined in the report Cybersecurity in the Golden State, issued in February 2014. The report is the product of a collaborative effort between the Attorney General’s office, CalChamber and Lookout, a mobile security company.

Another cooperative effort is Back on Track L.A., a program in which the DOJ worked with the Los Angeles County Sheriffs Department and the Los Angeles Area Chamber of Commerce to focus on low-level offenders. Elements of the program, Harris noted, include improving parental skills and the employability of the offenders, as well as substance abuse and mental health counseling.

The program is cost effective, Harris said. Housing an offender in the Los Angeles County jail costs $38,000 a year, compared to $3,200 per offender in the Back on Track program.

Harris highlighted two other efforts with benefits for the economy:

Battling elementary school truancy. One study showed that up to 40% of elementary school students are chronic truants and those truants are three to four times more likely to drop out of high school. Those dropouts collectively cost the state more than $40 billion a year in the burden they place on public safety, health, social services and not contributing to the tax base, Harris said.

The DOJ, Harris said, is pushing counties to do a better job in how they are handling truancy. The issue, she added, is ripe for a public-private effort.
Supporting the federal administration’s executive order to overhaul immigration laws. California has a huge population of undocumented immigrants “living in the shadows,” Harris commented. Bringing those people into the sunshine, she said, will boost the California economy $11.7 billion to $27.5 billion over the next decade.