The revised deal includes an extension to the phase-out period for the 25% U.S. tariff on trucks. The tariffs had been scheduled to phase out by 2021, but the amendment will lengthen the phase-out period to 30 years (i.e., until 2041). Additionally, the number of manufactured car exports to Korea under U.S. standards was doubled from 25,000 to 50,000. It is unclear, however, as to whether these changes will exempt Korea from the potential auto tariffs threatened by the administration under Section 232.

Other amendments include harmonized vehicle testing requirements, Korean recognition of U.S. standards on parts, and improvements to fuel economy standards. There also were modifications to Korea’s customs and verification processes, and its pharmaceutical pricing policy.

Once complete and certified by both governments, the documents may then be finalized for signature. Per the US Chamber of Commerce, the Korean government hopes to ratify the agreement this year, bringing it into effect on January 1, 2019.

The CalChamber reaffirms its support for the KORUS free trade agreement.

Defending KORUS is a priority issue for the U.S. Chamber, CalChamber, and businesses across the country. The U.S. business community views the KORUS FTA as a strong agreement. The KORUS provisions are beneficial for U.S. industries, agricultural enterprises, farmers, ranchers, energy companies and automakers.

The KORUS FTA sends a strong signal that the United States intends to remain heavily engaged in the region for a long time to come in business, economics, security and international politics.

The FTA strengthens the 70-year-old alliance between the United States and South Korea, while reinforcing the economic and political reforms South Korea continues to make.

The California Chamber of Commerce reaffirmed support for the U. S.-Korea Free Trade Agreement (KORUS) in a letter sent September 5, 2017 to members of the Trump Administration, including the Secretary of Commerce and the US Trade Representative.

On December 6, 2012, the California Chamber of Commerce received the prestigious Presidential Citation from the government of the Republic of Korea for promoting U.S.-Korea trade and commercial relations, and specifically for contributing to the passage of the U.S.-Korea Free Trade Agreement (FTA). The CalChamber was an early supporter of the U.S.-Korea FTA, the culmination of a five-year process from negotiations, to passage and implementation. 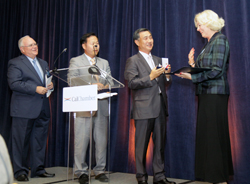 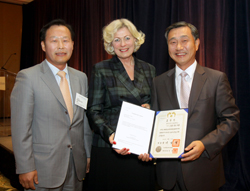 “The KORUS Advantage: A Basic Guide for US Companies to the Contents of the KORUS FTA” was recently published by the U.S.-Korea Business Council and AmCham Korea. This guide provides guidelines for U.S. businesses looking to take advantage of the KORUS FTA. December 2012

“KORUS FTA Facts and Figures“ is a six-month overview of bilateral trade statistics since the KORUS FTA was implemented, released by the Embassy of the Republic of Korea in Washington, D.C.

March 15, 2012 is the implementation day for the landmark U.S.-Korea Free Trade Agreement (FTA), the product of years of collaboration by the business community and both governments. The California Chamber of Commerce-supported FTA is the biggest free trade pact the United States has reached since entering the North American Free Trade Agreement (NAFTA) in 1994.

Recognition goes to U.S. Trade Representative Ron Kirk for his leadership in getting the U.S.-Korea FTA to the finish line.

His Excellency Duk-Soo Han, former Prime Minister and Ambassador to the United States from the Republic of Korea, was instrumental in garnering support for the U.S.-Korea agreement. Han spoke to the CalChamber on several occasions, as did the Consuls General of Korea in San Francisco and Los Angeles.

Statement from President on the Submission of the Korea, Colombia and Panama Trade Agreements
October 3, 2011

The CalChamber was part of a broad-based coalition that waged a multi-year campaign to secure congressional passage of the U.S.-Korea FTA. Congress approved the FTA on October 12, 2011. The South Korean Parliament followed suit on November 22, 2011.

The United States and the Republic of Korea announced on February 2, 2006 that they were beginning negotiations toward a bilateral FTA, with talks expected to take up to a year. Although the negotiations concluded on April 1, 2007, nearly five years passed before the FTA could be implemented.

Implementation of the U.S.-Korea FTA eliminates tariffs and other barriers to trade in goods and services, promote economic growth, and enhance trade between the United States and Korea.

Korea is a $1.64 trillion economy and its commercial relationship with the United States is largely complementary. In 2021, two-way trade between the two countries exceeded $160.72 billion. In 2021 U.S. goods exports to Korea were $65.7 billion, while imports to the U.S. from South Korea were $94.95 billion.

Korea currently enjoys broad access to the U.S. market and the United States is one of Korea’s larger exporting markets, importing about 14 percent of Korea’s worldwide exported goods. CIA Factbook

According to the most recent figures in 2020, U.S. foreign direct investment in Korea totaled roughly $33.88 billion and was concentrated largely in the manufacturing, banking, and wholesale trade sectors. Korean foreign direct investment (FDI) to the United States reached $62.4 billion in 2020, supporting 94,500 jobs. In 2019, Korea invested $1.7 billion into research and development, and invested another $13.5 billion to expanding U.S. exports. The top industry sectors for Korean FDI were: auto components, industrial equipment, software and IT services, consumer electronics, renewable energy, and electric components. Select USA

Korea is California’s fifth largest export destination. California is one of the top exporting states to Korea, making up nearly 17.6% of U.S. exports. In 2021, California exported more than $11.62 billion to Korea, an increase from $9.79 billion in 2020. Top products from California to Korea included non electrical machinery, computers and electronics, transportation equipment, and processed foods. Imports to California from South Korea totaled $26 billion, an increase from the previous year which totaled $21 billion. Top imports were made up of computer and electronic products making up over $11.8 billion of the total.

Under the FTA, more than half of current U.S. agricultural exports to Korea—with a value of more than $1.4 billion—will become duty-free immediately, including high-value agricultural products such as almonds, pistachios, wine and cherries. For many other key agricultural goods, such as pork and citrus products, the FTA will provide unparalleled access to the South Korean market and its prosperous consumer base.

Moreover, this agreement eliminates significant non-tariff market access barriers in Korea to U.S. goods, services and investment. Consumers in both countries stand to gain from the broad benefits of this agreement.

U.S. interests are protected under this agreement through robust provisions on transparency, intellectual property rights, competition, investment and other rules, particularly in the area of services. The agreement also has important implications beyond bilateral trade and investment. By giving U.S. exporters and investors a preferential position in the world’s 12th-largest economy (International Monetary Fund), an FTA with Korea enhances U.S. businesses’ ability to compete in the dynamic Northeast Asia regional economy. From a strategic vantage point, the FTA reinforces the critical partnership and alliance between the United States and Korea.

Korea is a significant market for U.S. small and medium-sized companies, which make up a majority of U.S. businesses exporting to Korea.

The Republic of Korea is a longstanding and close U.S. ally, and strong partner in advancing regional and global security. The U.S.-Korea FTA reinforces this critical economic and political partnership by deepening the links between the United States and Korea as they work together to protect peace and prosperity in Northeast Asia.

More than 1 million Korean Americans live in the United States, with over 30% living in California. Los Angeles County alone is home to over 154,000 residents of  Korean origin, according to the Migration Policy Institute. There also is a large population of Korean students studying at higher education institutions across the U.S. Korean visitors enter the United States via the U.S. Visa Waiver Program.

For California, the FTA is a big win. California’s exports of machinery also benefit from U.S.-Korea FTA reductions as machinery manufactures accounted for just under $2 billion of the state’s merchandise exports to Korea in 2016, and now account for $3.75 billion in 2021. According to the International Trade Administration in the U.S. Department of Commerce, transportation equipment accounted for $1.997 billion of California’s merchandise exports in 2016. With immediate removal of many of these related tariffs, exports have become more competitive and affordable to Koreans.

The U.S.- Korea FTA sends a strong signal that the United States intends to remain heavily engaged in the region for a long time to come in business, economics, security and international politics.

The FTA strengthens a more than 60-year-old alliance between the United States and South Korea, while reinforcing the economic and political reforms South Korea continues to make.

To help you take advantage of the US-Korea FTA, the Korean Embassy in the US has introduced a new website at www.uskoreaconnect.org
updated LinkedIn and Twitter profiles.