On Sundays, it is relatively quiet. It is the one day Cubans might take a nap. The culture is not like Southern Europe, where siestas are often enjoyed. We concluded our visit with a tour of the Museo de la Revolución, housed in what had been the presidential palace. 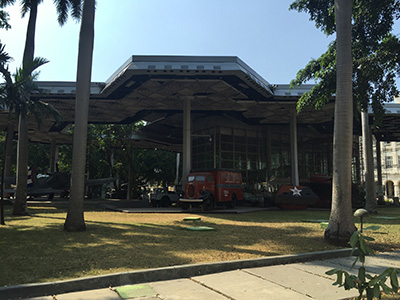 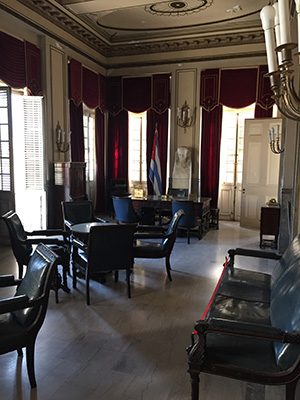 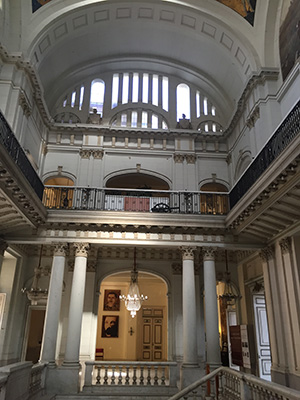 President Batista was the last to reside there. It was a fascinating history of the country – definitely presented from a very one-sided Cuban perspective.  There was also a large Venezuelan group touring the museum all in red t-shirts.  The Venezuelan Government had paid for this group to travel to Cuba. Prior to entering the museum, they had a brief demonstration at the entrance. The ship Granma used by the Castro brothers and Che Guevara to sail from Mexico to Cuba to begin the Revolution is the center of the Museum.

Then we made our way to the airport to return to the U.S. In short, this Policy Trip has been an incredible opportunity to learn more about Cuban history and to learn about U.S.-Cuban relations from a Cuban perspective. At this point, Cuba truly is a land of contrasts. The city of Havana has great potential. Although much of the city is in ruins, there are shining examples of progress i.e. the nearly-refurnished capitol building and opera house, and the wonderful and creative paladars/private restaurants.  Slowly, entrepreneurism is growing with the allowances for micro and small businesses.  The housing market will change bit by bit, as people “swap” houses. Cubans are friendly and would chat with us on the street. Knowing we are Americans, everyone wanted to hear when the embargo would be lifted.  I am hopeful for the future of the people of Cuba.