Our day began with a briefing and tour of Trinidad, led by architect, restoration specialist, and historian Nancy Benitez. 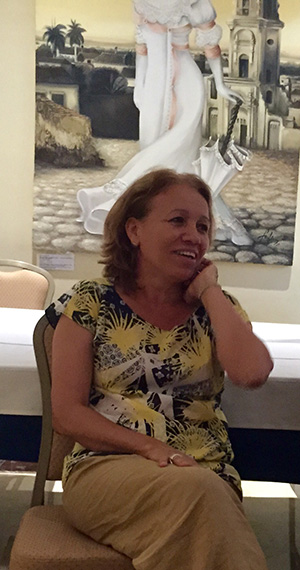 Founded in the early 16th century, Trinidad is a UNESCO World Heritage Site, and is one of the best-preserved cities in the Caribbean from the sugar trade era. This is the area of the Valley of the Sugar Mills, overlooking 75 former cane sugar mills, barracks, and plantation houses, stretching over 100 square miles into three valleys.  In 1827, more than 11,000 slaves were working in the mills, during its peak operation (UNESCO). Although Cuba’s sugar industry greatly declined in the 1990’s this valley was a testament to its former glory. Trinidad’s economy is now dominated by tobacco processing and tourism from many Western groups. 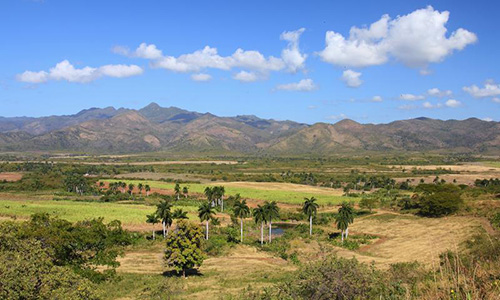 The city was founded in 1514, and was the third city founded on Cuba by the Spanish. There was a major building boom in the city in the 1860s. Wealthy Europeans had homes in Europe and large mansions Cuba. They also imported stone and marble for building together with art.  Later in the century, as slavery was ending and the ships were getting too big for the local port, the sugar industry declined for the Europeans.

In 1893, U.S. companies took over the sugar industry, updated the process and machinery, and used the railroad to a better advantage. A road to the city was first built in 1957 by the Batista administration. In 1978, the city was made a national monument. The mansions were made into museums to protect them. In 1988, the city was named a UNESCO Heritage Site; however, the city was not ready for all the tourists.  There were 2 hotels (now there are 6 hotels) and water and food was scarce. The water system is from the springs in the mountains, but the system is over a hundred years old. Water is transported by truck or even on horse carts. The limited state goal was to have 5 restaurants, 2 bars and 3 state owned souvenir stores.

In 1997, there was a law enacting the Historic Office, establishing a local two-percent tourist tax, which would go to the Historic Center, and not the central government. This amounted to $400,000,which was also supposed to repair the sugar mills. In 2010, the law was changed to allow opening of small private businesses.

In four years, 1,000 rooms were added to the Bed and Breakfast business. As they were built, water and power continued to be an issue. Now 300,000 visitors, primarily Europeans, come to the city each year.  It will be “interesting” to see how the city will handle the new influx of American tourists. The Historic Center has requested a higher tourism tax from the central government, but has not received a response. The city has a population of 45,000, but now no one is interested in working for the state, as one can be in the private B&B, restaurant and handicraft business. One of the biggest issues continues to be the lack of a real retail system and a real wholesale system. Our speaker concluded by saying that she understands the central government has plans for the future development of the city, but those plans have not been shared with the Historic Center. 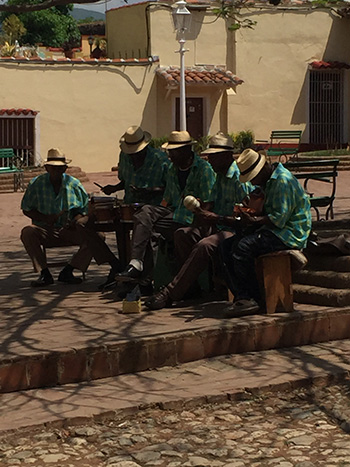 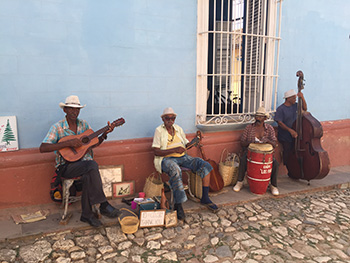 We visited the museum next to the church. It was a state run museum and the four people who sat at the entrance were uninterested and not very helpful. However, when I was in a room alone with the local “docent” – she wanted me to buy a handmade handkerchief for three CUCs – which I did – clearly, trying to supplement her income.

Following our time at the gallery, we met with parish priest to discuss church-state relations in Cuba. The most prevalent religion in Cuba is Catholicism, with over half of the population identifying itself as being Catholic. When the Cuban government restricted religion after the 1959 revolution, there was widespread religious persecution. Although religious freedom was granted in the 1990’s, church participation is still at a much lower level than it was before the revolution.  About 8 people attend daily mass and about 100 for Sunday mass.

We reflected on the words of the priest over lunch at the Paladar San Jose. At the bar of the restaurant sat the state auditor who was going over the records which were in a hand-written ledger.

In the late afternoon, we boarded our bus and drove 10 miles to Club Amigo which was an old Soviet built beach resort (a bit of an oxymoron). It was a very ugly concrete structure, but did have beach chairs, which could be rented.  We swam in the Caribbean Sea – which was very warm.

On the bus, there was a discussion of changing the currency which will eliminate the CUCs. The government will collect all old pesos, and to know how much money there is in the system – and know how to peg the new currency to the U.S. Dollar. Currently the CUC is one to one. CUCs started in 1986 for tourists. This change will end with one currency.