We began the day hearing from a top economist with the University of Havana Economics Department who was open and frank. She spoke of Cuba’s ambitious goals and trying to make the economy sustainable, which is neither easy nor successful, yet. She described Cuba as not trying to change from socialism, but trying to mix socialism with other parts of market autonomy to make households and enterprises efficient.

Discussion of the program of changes in 2011 and why it has it been slow and not successful – due to number of contrasts:

Compared with other countries Cuba has among the lowest GDP, but second in human development index. Keeping the index is expensive.

Forty percent of GDP is devoted to special services – the highest in the world. Cuba is not invested enough in innovation success.

Although Cuba is underdeveloped, there is a demographic pattern of developed counties i.e. the high life expectancy, population decreasing, and aging population.

The labor concentration is in lowest areas i.e. agriculture, construction, and social services. Cuba has experts in the bio and medical world with less than 9 percent of work force in these areas. There is a hope for the future in these areas.

Cuba is not allowed to be in international capital market. Cuba has to grow, but needs investment and right now can’t obtain international financing. The countries which are willing to lend do so at high interest rates.

Cuba is restricted via exports and is import driven. The twisted dual currency system kills any export opportunities, and promotes only imports.

After three years of new laws and economic changes there was a 1.3 percent growth last year.  Sugar was 12 percent lower and tourism grew only 4 percent.  Overall growth was one percent.

Ideas for the future include change in internal relative prices and the need to lower exchange rates.  New exchange will help exports, but cause bankruptcies too – but 60 percent of enterprises will be better off after the new currency.

The average salary has been raised over the last ten years, however, efficiency has not improved.  Cuba has had a policy of full employment which results in low wages.  And there is a very high social net. There exists free education to PhD level, food for all, etc. And there are no layoffs – very important. And a very narrow salary scale. Cuba is in a vicious circle.

In foreign investment – the average world wide FDI is more than 3 percent. Latin America has 2.7 percent.  Cuba has .7 percent.  This needs to at least double.

The idea of having a state company in the middle between foreign countries and locals is to not underpay the workers, which is a bit of an oxymoron – really meant to not just have foreigners look for low labor.  There are some changes in state owned enterprises for greater autonomy. This has been slow and is greatly needed.

There is a change in labor market. Ten percent of state employees are now moving to the private sector – small scale shops, taxis, restaurants, barbers, and beauty shops.

Regarding agriculture – 75 percent of land is private or cooperative. But it is still very low productivity.

There is a discussion of a new tax reform to try progressive taxes, which is well- designed for the future.

The best immediate growth will be in tourism, sugar, nickel, and agriculture – but need to move in to health cluster and more technological products.

She noted that Cuba needs to have social reform and needs to be more flexible. The average population doesn’t understand how much social services cost.

All Cubans like and only want to improve the health and education system, even if they want other changes.

Bureaucracy is the real problem – and we hear again – the idea of needing a retail system and wholesale system. People do not have enough access to credit market and cannot use their home or land as collateral. This is because the government is trying to protect the people from losing their property. At the same time there is a parallel economy going on with those who receive remittances and support from Miami.

The worst crisis was in the nineties, with 35 percent GDP loss in two years.  It was still believed by the historic leaders that parts of the old system could be maintained. Now that is not believed any more.

We then moved from the hotel and took a pedestrian ferry across the bay of Havana to Regla. Regla was originally founded during the colonial period and was used as a camp for African slaves, making its Afro-Cuban roots very strong to this day.

Here is a photo of the ferry: 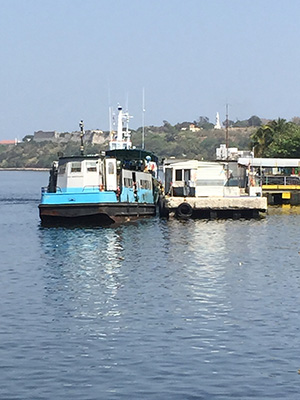 I also took these photos from the ferry: 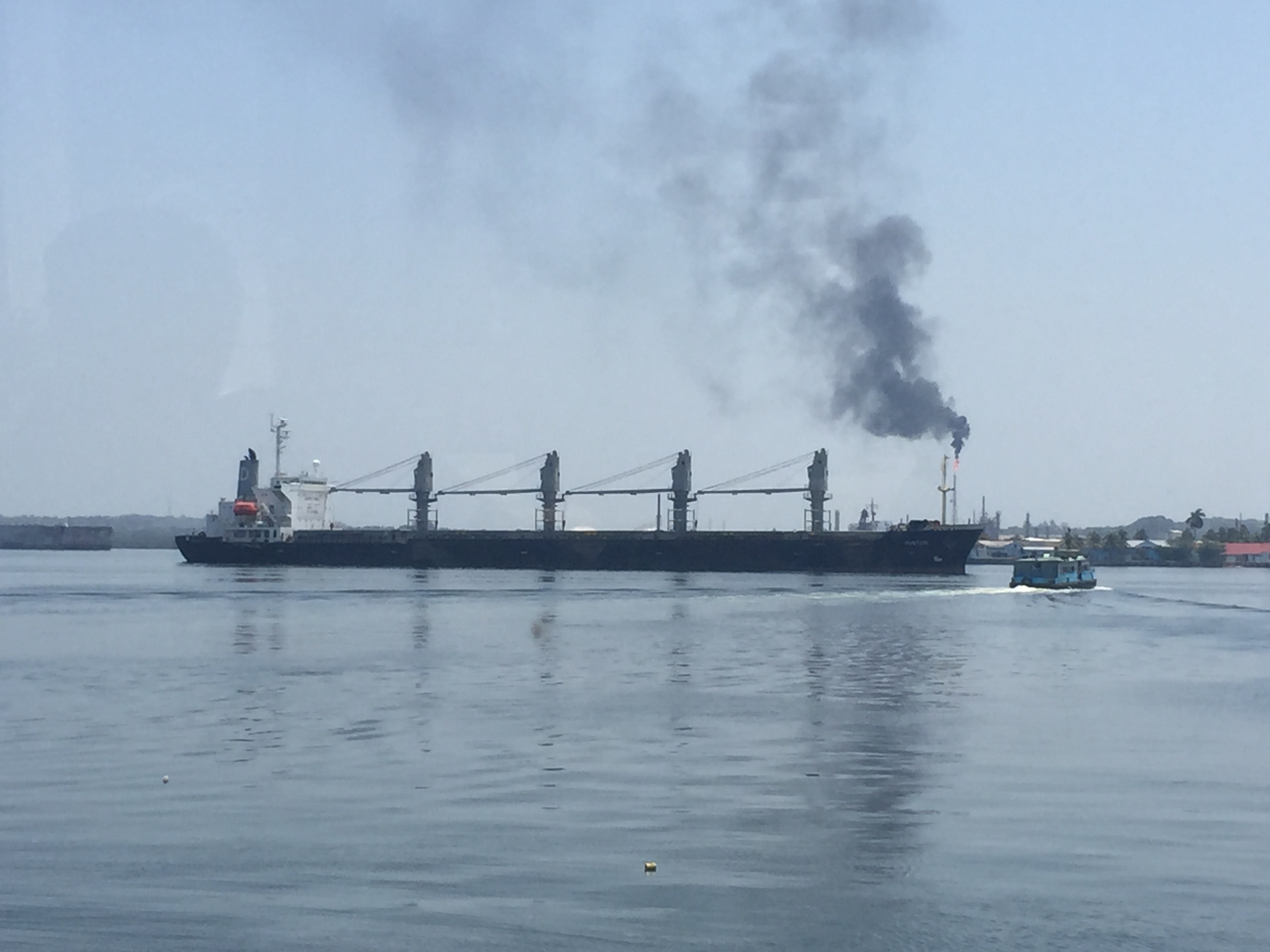 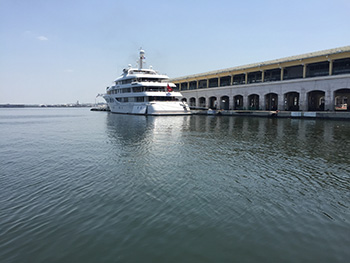 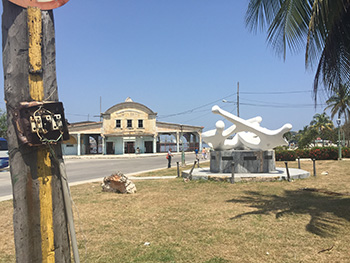 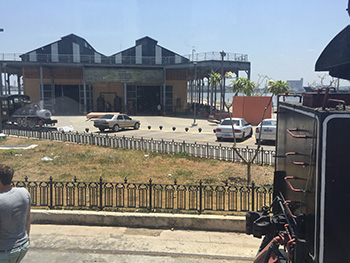 Here are some lovely photos of Regla: 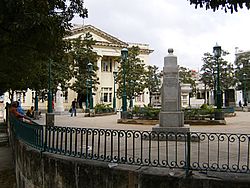 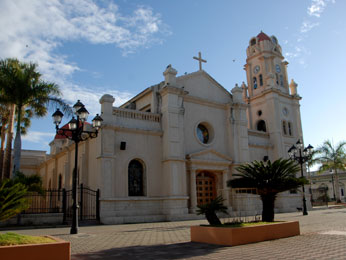 We met with Alexey Rodriguez and Magia Lopez of the jazz, hip hop duo Obsesión, who shared their thoughts on gender and race issues in Cuba. They were kind enough to open their home, which was in a lower income neighborhood. We climbed several flights of narrow stairs until we reached their small, but very neat rooftop apartment which was shared by other family members, including Alexey’s very sweet Mother, who was cooking lunch. The group’s manager, who spoke fluent English, interpreted during the informal presentation and discussion. We viewed two of their videos, one which focused on respect for Mothers and actually featured Alexey’s Mother. 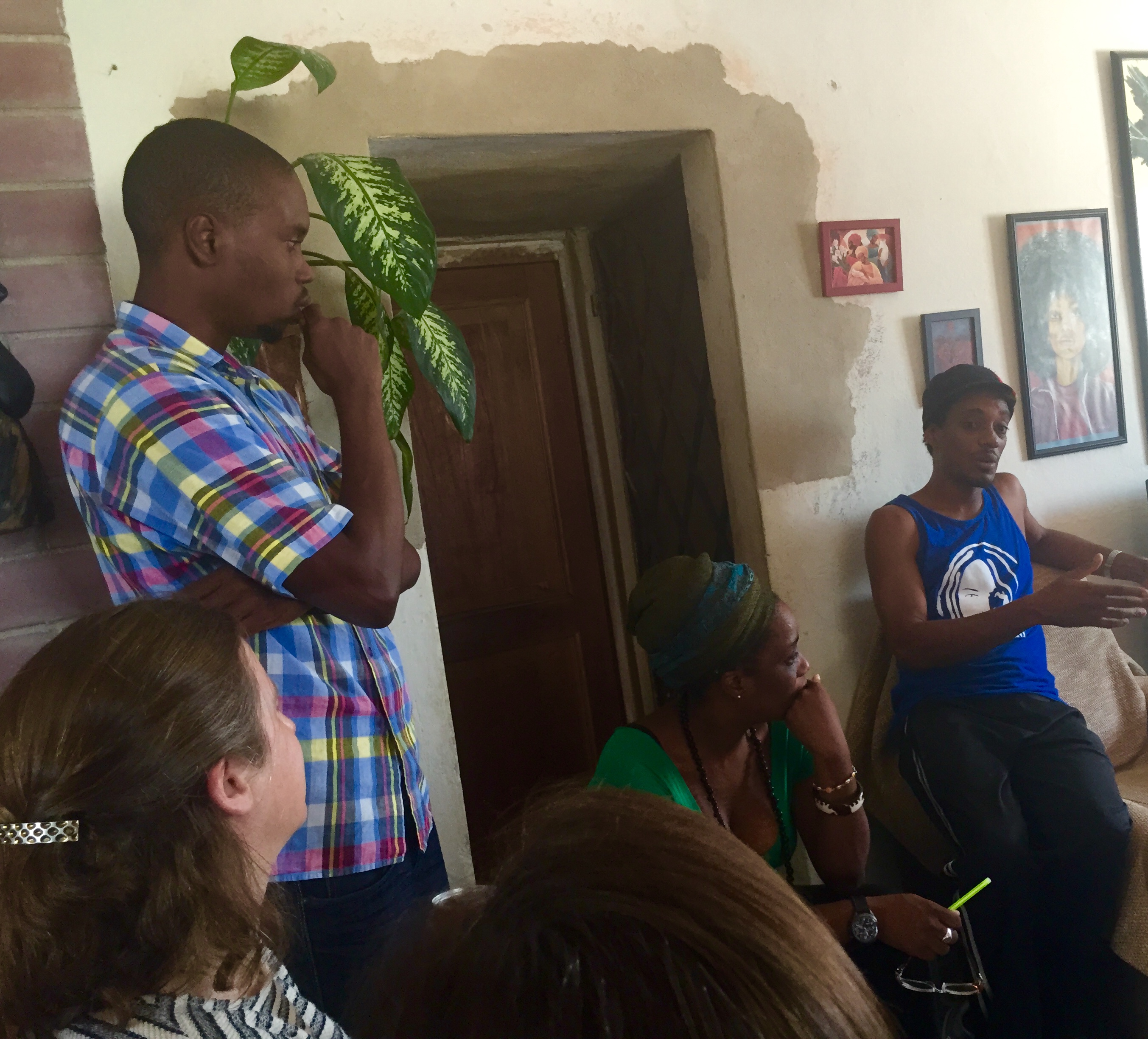 They originally were street performers who just wanted to belong, but now have gained international status. In their younger days they only would sit on the roof tops with coat hangers for antennae listening to the otherwise blocked Miami 99Jams radio station.

Later with televisions close to the coast, they might be lucky enough to catch a glimpse of Soul Train. When the Soviet period ended, there was no transition – life changed from one day to another. Jobs were lost, there were social ills, and people trying to reach the US via rafts. Music was now a way to express anger and dissatisfaction. Although the musicians didn’t have access to markets or technology, they did get the attention of activists. In 2001, Harry Belafonte assisted nine Cuban rappers in visiting New York City. The trip had originally been scheduled for September 11, 2001, and was then rescheduled for October of the same year. It gave the opportunity for musical exchange, access to technology and marketing. They have regular gatherings in Havana of younger artists and continue to encourage activism and positive messages.

We enjoyed lunch at El Templete Restaurant, known for its fresh seafood and lively environment. 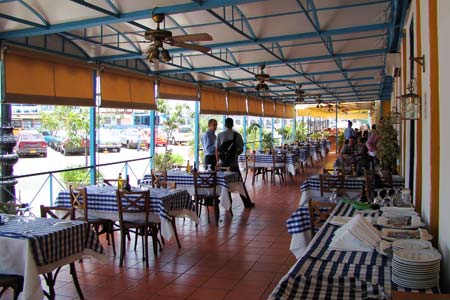 The name of the restaurant is derived from its close proximity to El Templete Monument, which pays tribute to the location where the establishment of the town of San Cristóbal de la Habana was celebrated in 1519. The monument includes a statue of the bust of Christopher Columbus. 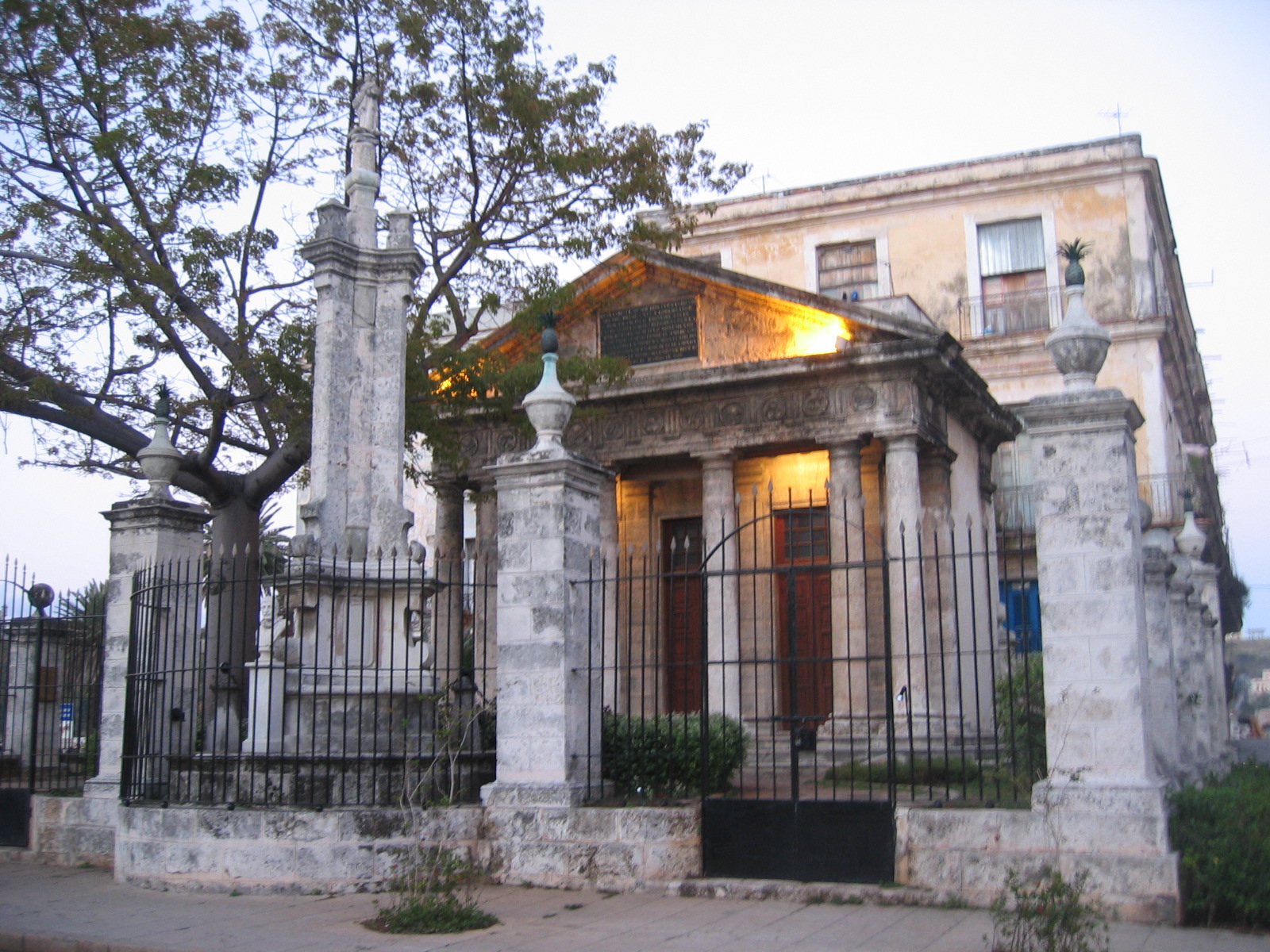 During a meal, our guide explained the maternity leave in Cuba for government workers. A mother is allowed one year prior to giving birth in case medical assistance is needed for fertility. With so many women of child-bearing age leaving Cuba, this has importance. Then following birth, another year of paid leave is allowed, and yet another year of unpaid leave can be requested.  The rules for the small business community seem to be much more unclear. 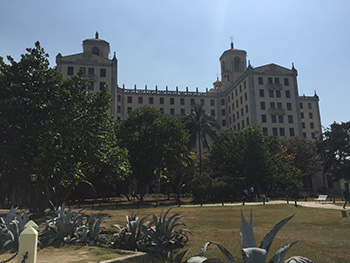 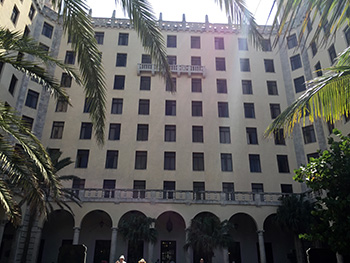 The hotel is located on the site of the Santa Clara battery, with two cannons dating back to the 1797.  Built by US firms McKim, Mead & White and Purdy & Henderson Company in just 14 months, the hotel was opened to the public in 1930, when Cuba was a major travel destination of Americans. Prominent visitors to this hotel included Churchill, Hemingway, John Wayne, Sinatra, Alexander Fleming, and Ava Gardner, to name a few. The Hotel Nacional was even the site for a mob summit in 1946 hosted by Meyer Lansky and Lucky Luciano and attended by Albert Anastasia, Vito Genovese, Frank Costello, and Santo Trafficante, Jr.

There was a large poster for each decade of VIPS who had visited the hotel. Note: Arnold Schwarzenegger in the upper right-hand corner. 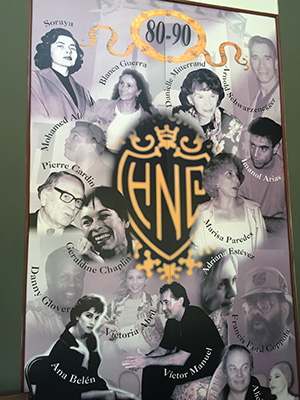 We walked through the gardens around the Hotel Nacional. There is a museum, featuring history from the 1962 Cuban Missile Crisis. During this time, trenches were created below the gardens and defenses were set up by Fidel Castro and Che Guevara to prepare the city for an aerial attack. 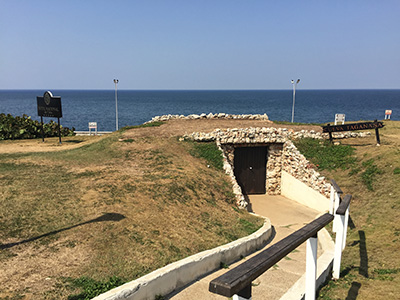 Later, in walking back to our hotel, we passed by the old Bacardi headquarters which is an incredible Art Deco building and the second tallest in the city next to the Capitol building. 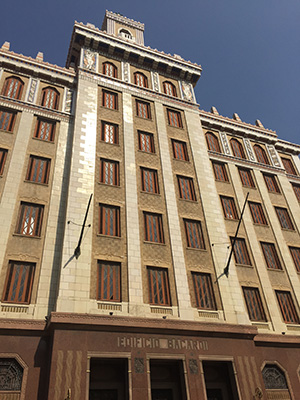 After taking a few photos of the exterior, the (presumably) security guard beckoned for us to enter. He said there was office space to rent, however, there was no signage indicating so.  The lobby had been restored and is beautiful. 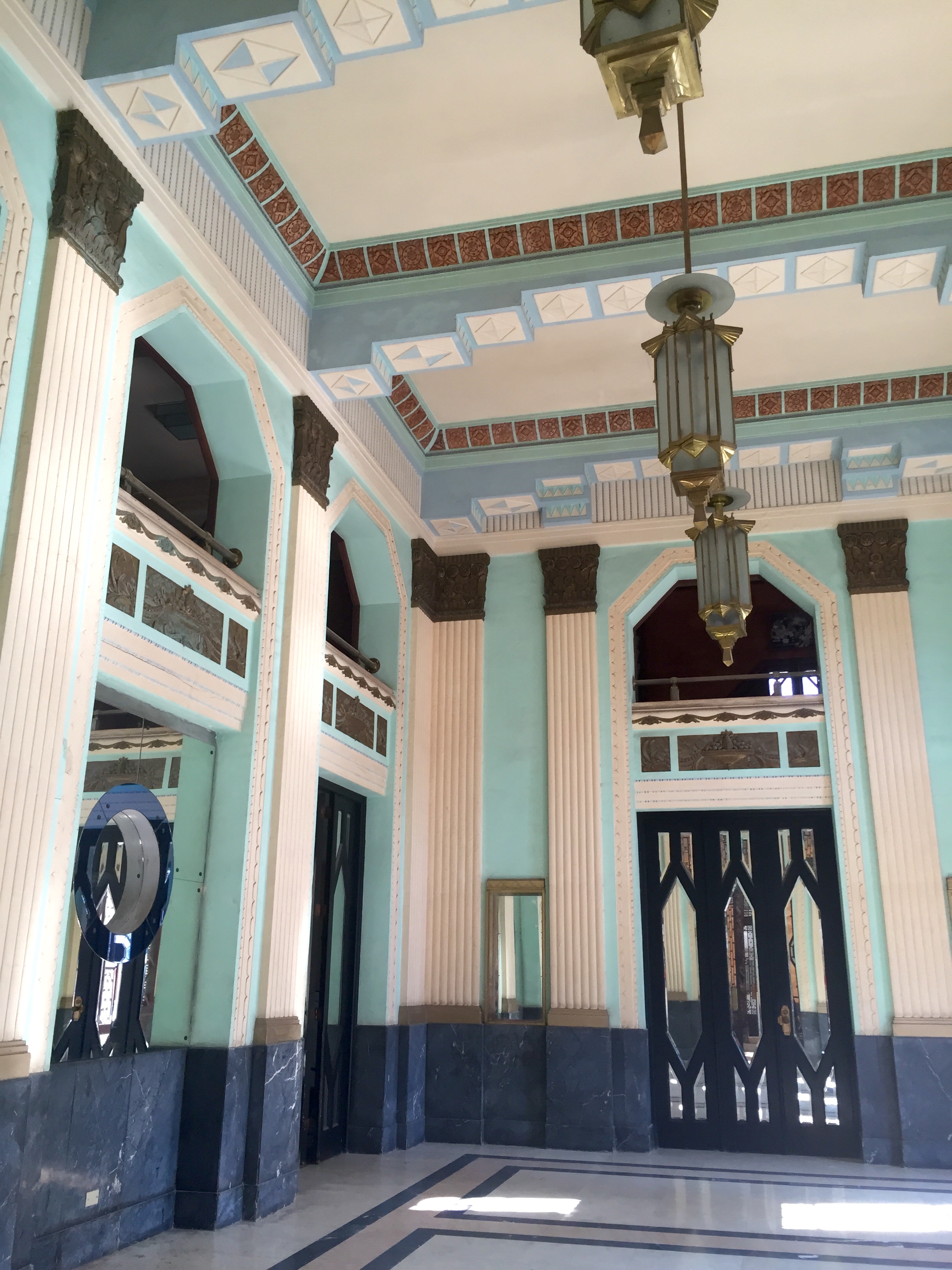 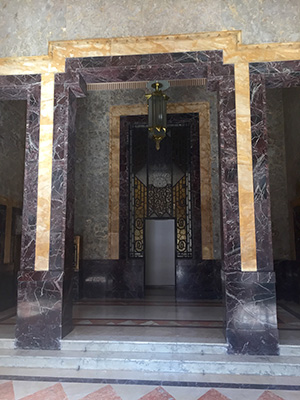 What had been the bar area is still closed. Apparently the Bacardi headquarters in Puerto Rico has a recreation of the original bar. The guard asked if we would like to take the elevator to the top and see the view. We paid a peso per person and pushed the button for the 7 th floor. When we stepped out of the elevator, it was a totally empty area with a concrete floor.  In a small room next door there was an old stair well, which led to an even small staircase. Eventually, we were standing outside on the top tier with a most spectacular 360’degree view of the city. 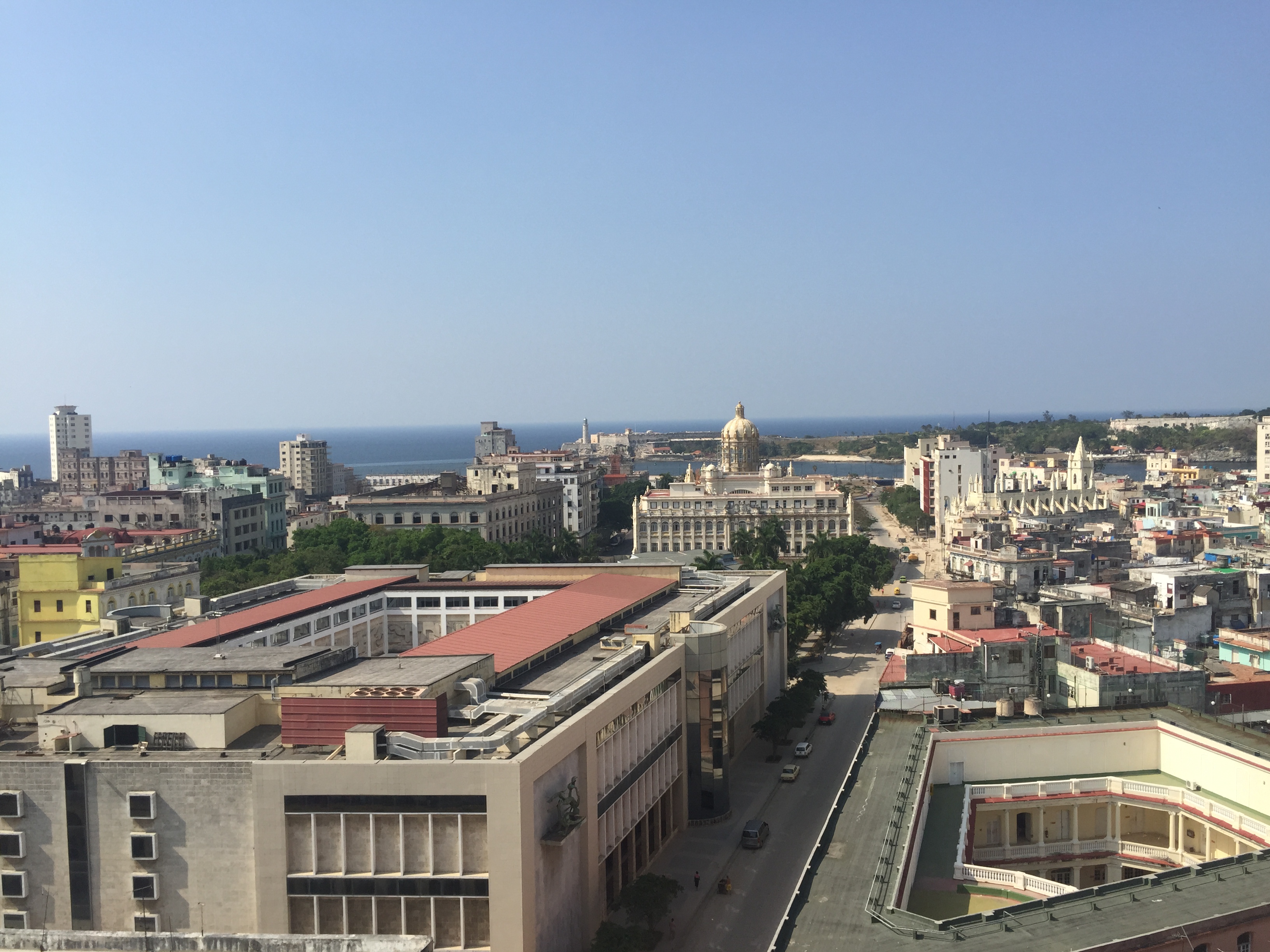 When we came back down to the lobby area, the guard was gone, and the building  was empty. We presumed he had simply supplemented his salary in “allowing” us to see the tower. Our guide indicated that whole tours cannot go up there, and that we were just there at the “right” time.

The delegation also had the opportunity to meet with a young woman entrepreneur in her home. Again, this meant climbing up several narrow stairs to a small apartment. The woman had two small children, yet graciously allowed the delegation to enter and hear about her sewing and clothing manufacturing enterprise.  Her mission had begun by walking the streets for a month until she found a sewing machine for rent. Without internet and all its benefits, people put signs in their windows when they wish to sell something i.e. an appliance. After securing material from Panama, this enterprising young woman has made a small success in selling clothing. She is yet, another example of a burgeoning micro business.

We made our way to Café Madrigal, located inside a colonial mansion with numerous stunning works of arts on the walls. We were joined by musician Frank Delgado, who describes himself as a part of the nueva trova movement, which emerged in the late 1960s following the Cuban Revolution of 1959. Delgado described this movement as attempting to focus on serious issues such as sexism, racism, socialism and injustice, to name a few. We then had the privilege of hearing a musical performance by Frank Delgado, which was wonderful.

We ended the day with a farewell dinner at Paladar San Cristobal, featuring authentic Cuban food and a stunning interior with marble pillars and walls covered in photos, clocks, and antique record covers. We took this time to talk about the highlights of the trip for each of us and it was then that it set in that our trip was nearly at its end. 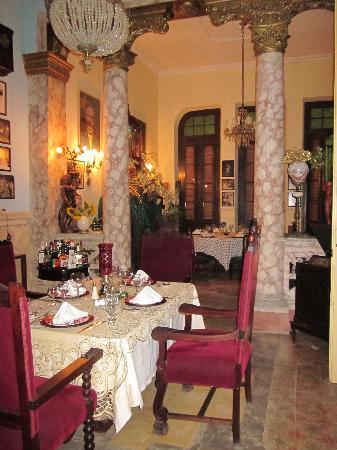 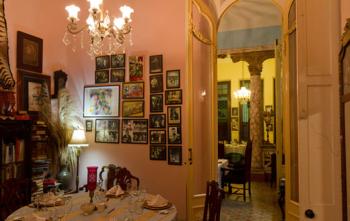