Our delegation landed in José Martí International Airport in sunny Havana, Cuba after a quick 28 minute flight, reaching only 25,000 feet in flying altitude, from Miami on American Airlines, a CalChamber member.

Technically we were flying on ABC Charters, operated by American Airlines. Otherwise, reciprocity would be required meaning the Cuban National Airlines could fly to the U.S. At this point, with the U.S. Federal Court claims pending for expropriated property in Cuba, this would result in the U.S. being obligated to confiscate any Cuban government plane landing in the U.S.

The airplane was a Boeing 737- 02/2015 Revision for 144 passengers. I was delighted we weren’t flying in a small plane which is what I originally had envisioned. There were only a few airplanes at the airport, most of them charters or airlines of which I was not familiar.  The one main airport terminal was not large and the charter terminal was a one story older building. In addition to a customs form (there is no limit on hard currency coming into Cuba, but one is to see the Customs Inspector if one takes more than US$ 5,000 out of the country) – there was a form for the Ministry of Public Health indicating current health status listing a number of possible symptoms. There was great interest if anyone had recently been to Africa. We also went through a TSA like X-ray process to enter the country. 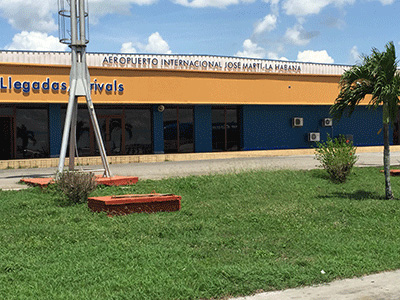 The Airport is named after José Julián Martí Pérez (January 28, 1853 – May 19, 1895) a national hero. He was a poet, writer, journalist, professor, publisher, philosopher and theorist. Through his writings and political activity, he became a symbol for Cuba’s independence from Spain and is referred to as the “Apostle of Cuban Independence.” He also wrote about the threat of Spanish and U.S. expansionism into Cuba. He dedicated his short life to the promotion of liberty, political independence for Cuba, and intellectual independence for all Spanish Americans. His death was used as a cry for Cuban independence from Spain.

We were met on arrival by our enthusiastic guide who led us to a modern air conditioned Chinese-manufactured bus for our group.  Outside there were also taxis waiting – both vintage cars and modern yellow Hyundais from South Korea.  A taxi license is one of the few authorized private enterprises in Cuba. Gasoline costs the equivalence of U.S. $5 per gallon.

Here is a photo of taxis from the hotel: 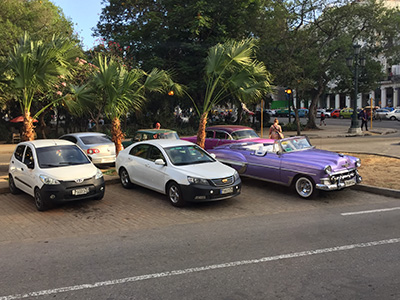 In general, we understand the bus system works well, in contrary to the train system which was described as one of the worst. 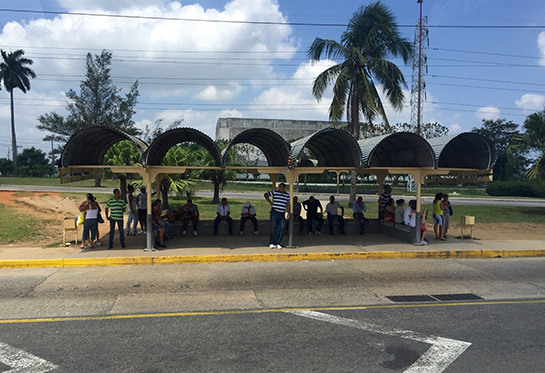 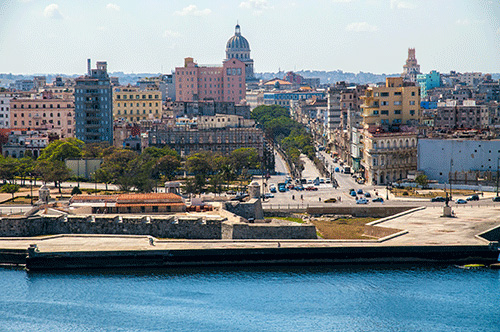 For the majority of our group, this was our first time stepping foot on Cuban soil.  For our delegation leader, Ambassador Charles Shapiro it was a return trip, but the first in his position as president of the World Affairs Council. 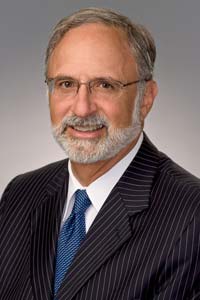 After a 25 minute ride, our group arrived at the Hotel Parque Central, centrally located in Havana next to the Capitol and Obispo street (Calle Obispo). 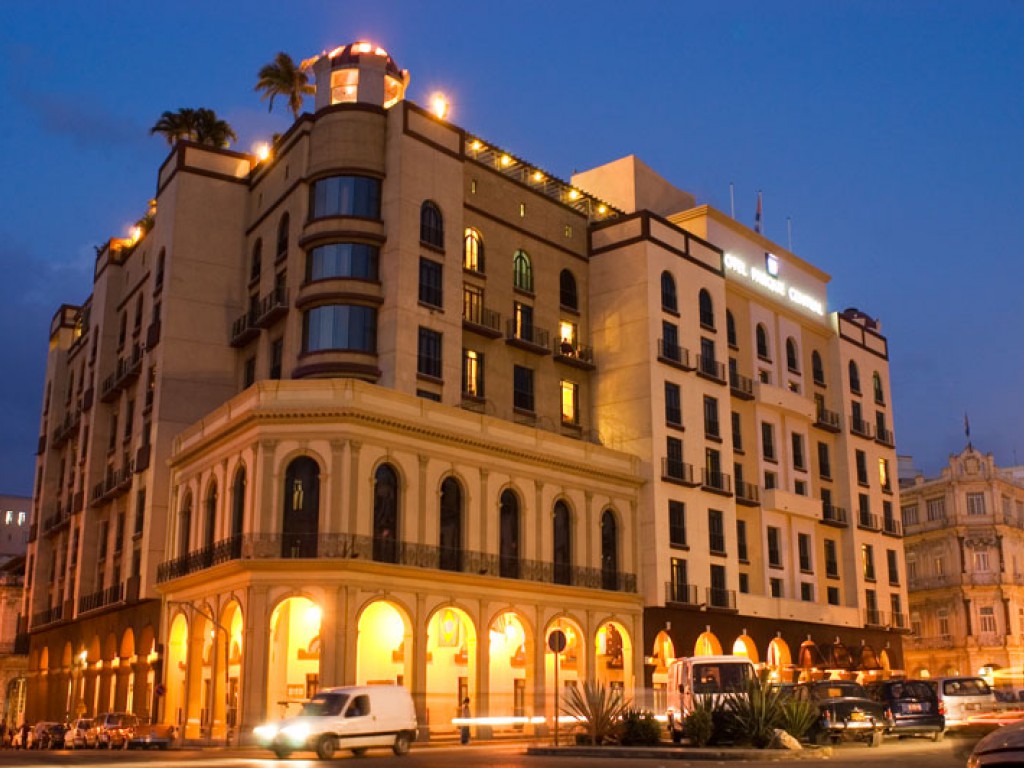 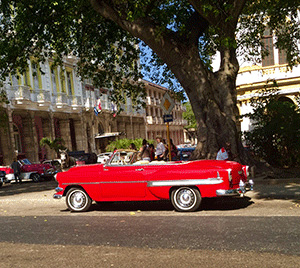 Located on beautiful Central Park in the heart of Havana, the Parque Central comprises two buildings, a colonial section and modern tower, linked by a stylish, underground tunnel. Both sections have independent lobbies, restaurants, and rooms. The newer tower is sleek, chic and contemporary, with a wood, glass and steel design theme set off by bright colors and textured fabrics. The colonial part is classic elegance: what you’d expect to find in a 5-star hotel in any global capital city.

The Hotel is run by a Spanish company, Iberostar. The employees are all Cuban government employees and receive a salary established by the government.

As we would hear over and over, the average state government salary is the equivalent of U.S. $20 per month. As it is generally such that a minimum of $120 is really needed to survive – people improvise. In the case of hotel employees, they rely on tips. We would also hear that generally every Cuban probably breaks the law in some small way every day in order to obtain what is needed for living.

Calle Obispo, is Old Havana’s main interconnecting street filled with shops, music bars, and art galleries.  Cars are not allowed access to this bustling hub of activity for residents and tourists (mainly European and Canadian). 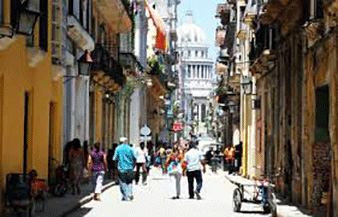 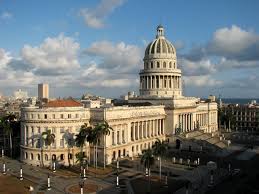 After checking in and quickly getting settled, we had an orientation regarding the city, which is considered to be very safe. 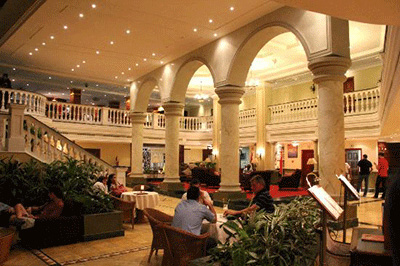 The main concern seems to be watching where one walks as the sidewalks, which are old and in disrepair. Frankly, there are major holes in the sidewalks. We all of course could not help but noticing all the classic 1950’s cars on the road imported from the Soviet Union and the US.

We then were joined by Miguel Coyula, urban planner and architect for a socio-economic discussion. 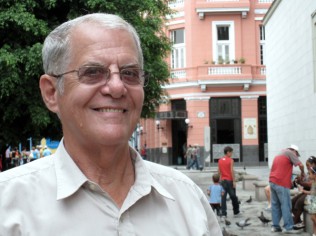 Coyula noted how Havana is three cities in one-Old Havana, Vedado, and the newer suburban districts. Old Havana is distinguished by historic colonial architecture and former city walls. It was founded in 1519 by the Spanish and according to UNESCO, “includes some of the oldest and largest stone fortifications now standing in the Americas.”

Coyula gave us a brief history lesson of Cuba. The Colonial period is from 1492 when Christopher Columbus first landed in Cuba to 1898 at the end of the Spanish American War.  What follows is the “American occupation” until 1901, then the Independence period until 1959, followed by the Revolution period, which includes the “special period” following the Soviet collapse.

Historically ships sailing from the Americas to Spain always stopped in Cuba. The many cobblestones in Cuba come from Massachusetts and were originally ballast until sugar was loaded on the ships in Cuba. The first aqueduct built in the Americas was in Cuba and the oldest fortress. In 1762 there was a brief, but massive British occupation. However, they were quickly driven out by malaria and yellow fever. Then the Spanish arrived. By 1837, Cuba was the fifth country in the world to have a railroad and was progressing ahead of Spain.

Moving to more modern times, when the revolution came all the casino equipment was destroyed (as were all the parking meters – so Havana is a city without parking meters even today). The Havana Country Club with golf course became the University of the Arts. The National Institute of Scientific Research was established. The headquarters for an energy company became the Ministry of Energy. The former General Motors headquarters –  photo below – became the Ministry of Foreign Trade. 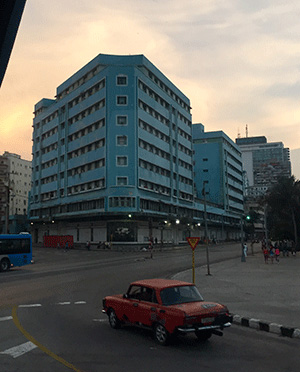 What was to be a major bank became the municipal hospital.  A sports palace was actually the place the Bay of Pig Prisoners were held – not a real prison.

After the Revolution, housing was eliminated as a business. There was to be neither homelessness nor gentrification. There were many prefabricated houses and buildings put up in Havana. Between 1900-1958, over 80 percent of the city was built, so now the city is in great need of repair – and all more or less at the same time. In 1959 rent was simply reduced by 50 percent. In 1960 the Urban Reform Law meant that property and housing was nationalized. In 1970 there was a movement to build your own home.  Houses until recently have been owned by the state. A house is now bought with 20 years to pay the state. There is neither mortgage nor interest paid. Most people do now own homes, but have a difficult time maintaining them due to costs.

The average salary is the equivalent of $ 20 per month. It isn’t really possible to live on that, so people “supplement” to at least $120. A very common form is via “Faith” or Fe – which stands for  “familia external” – or family living in Miami who will wire money often on a regular basis. Remittances are key for many families in Cuba. The issue becomes the middle man who will then deliver the money to the homes in Cuba, and of course takes a cut. There are official channels for smaller remittances.

The Soviet period lasted until 1990, when Cuba was a member of the COMECON. Then following in 1993, US dollars were allowed in the country, and the dual currency started with pesos for the locals and convertible pesos or Cuban CUCs which are convertible for tourists.

With the decline in the sugar commodity and moving to a service economy, there are many changes. When the Revolution began there were 3 universities on the island – now there are 65!  None of the Universities teach business nor is there a MBA program. The number of universities will need to be scaled back. Currently one of 11 in the country has obtained a University degree. However, with no related employment, many young people are not taking advantage of this educational opportunity, as more money can be made being a waiter in a restaurant with tips.

People who work for the state pay no taxes – only those who are self employed i.e. taxi drivers, barbers. The term “private sector” is not used. There is also no property tax. There is a very low flat fee for water and electricity, so there is no connection between cost and usage.

As things change, Coyula hopes that urban planning is well thought out. He cited the growth in Shanghai and the related pollution – indicating that Shanghai has gone from being a “Chinese” city to a city in China. He cited Portland, Vancouver, Vienna and the Scandinavian cities as good models. So far, Cuba (at least officially) does not have a real gun, drug or a race issue – it would be disappointing to see that change.

Now on a daily basis, there are visitors such as George Soros, the head of Sony, and Governor Cuomo of New York.

Here is the PowerPoint presentation on which Coyula based his fascinating history lesson.

Following the inspiring discussion, we had dinner at the trendy El Cocinero, a vibrant restaurant in an old renovated vegetable oil factory. The restaurant can be reached by climbing three flights of circular stairs to a sunken roof terrace. It was an excellent atmosphere providing a great welcome to Cuba. It was like being in Soho or Madrid. 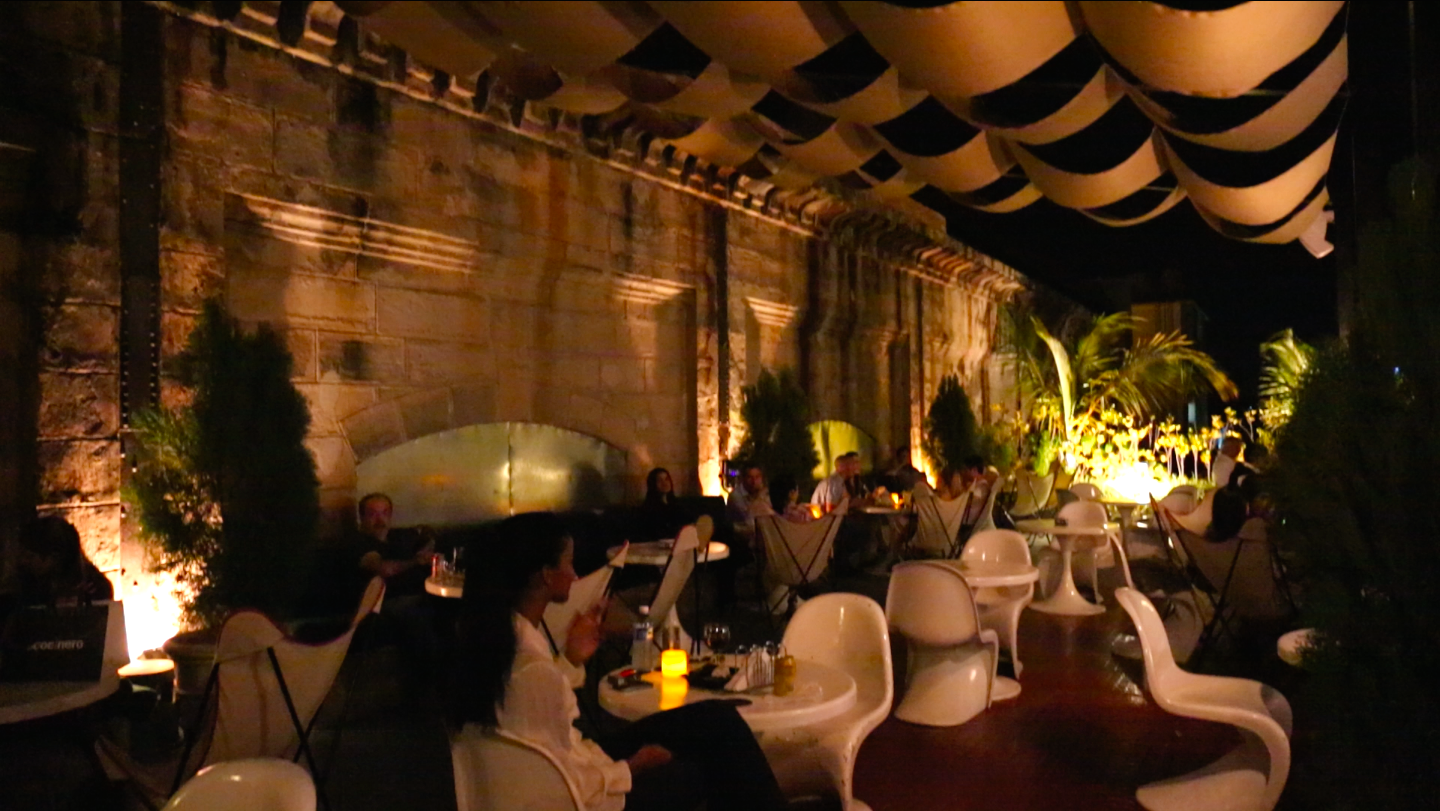 Following dinner, we walked next door to La Fabrica de Arte Cubana  to enjoy live music and see some interesting and quite modern works of art. There were many young Cubans – all with iPhones.

On the return bus ride, our guide indicated that there are 4 national TV stations and one very left wing Venezuelan station called Telesur – all trying to keep up with the underground bicycle delivery of the “weekly package” which can be purchased for $25. The package includes 7,000 gigabytes of U.S. TV with all the latest including NBA games – and all with subtitles.  Anything seen in the U.S.  can be accessed three days later in Cuba. People also have illegal satellites to watch the Miami TV channels 41 and 51. The government knows this all goes on and at this point can’t really stop it. Other times various embassies are used to download. So needless to say there is a large underground economy and even through Cuba is thought of as censured society, it really isn’t any longer.

Before turning in, I thought I would look at the television in my hotel room. Clearly, via hotel room satellite, I had my choice of numerous channels, including CNN, FOX Sports, BBC, the Disney channel, French, Chinese, Russian and Venezuelan and of course, Cuban programming.