In the am, we had a longer bus ride to Havana with lots of time to learn more information:

We drove by the state run sugar industry with an irrigation system provided by Saudi Arabia.

In 1976, membership in communist party blocks were set up – the entire election system is based on popular councils.  There are local blocks with delegates, but no campaigns. In the local shops and bakeries, etc. there are photos and resumes of candidates. People vote for provincial Assembly members, who then chose the national system, and they choose the president who chooses the cabinet and ministers. Each person only votes once. However, as there many levels, that is why they say it is a democratic system. You cannot impeach anyone. They all serve four years.  Every 2 years they rotate one third of the representatives.

The chair of the Olympic committee is 98 years old. He needs help to stand to greet visitors at the airport. Raul Castro is expected to change laws regarding terms of various positions so younger people can get more involved. Up until now, it has been a paternalistic society.  People don’t really know the law, and never challenge the law or question authority. The majority of the National Assembly simply vote with Raul Castro.

Our guide says Cuba is changing the economy from the basement up instead of waiting for the top down.  “The genie is out of the bottle.”

Regarding Guantanamo, the U.S. wires “rent” money to Cuba, but Cuba doesn’t accept the money. Jamaicans built the base and travelled back and forth during construction.

Guantanamo has the poorest economy.  The major port there would be important to Cuba. The people who live near Guantanamo can see all the U.S. TV channels – movies, sports, news, and cartoons.  The Cuban and U.S forces get along well, and neither wants to be the cause of trouble. At the base, there is football field, basketball and soccer. There are ten movie theatres. 50,000 people live on the U.S. base. There are many land mines surrounding the area.

The Cuban military is similar to Israel, in that the entire population is in the reserve. One can own hunting weapons, however, if there is a political gathering then all guns are collected and returned after.

Few can afford drugs, and drug crimes are severely punished (25 years for smoking marijuana).  Rum is everywhere and cheap.

On the way to Havana  we stopped at La Finca Vigia in San Francisco de Paula, the home of Ernest Hemingway from 1939-1960, where he wrote The Old Man and the Sea, and For Whom the Bell Tolls. This is a writer closely associated with the country, who started traveling to Cuba in the late 1920’s. He wrote most of For Whom the Bells Tolls in the fifth floor of the Ambos Mundos hotel with a view of the Plaza de Armas of old Havana. Hemingway won the Pulitzer Prize for The Old Man and the Sea in 1953, and directed the Prize to the people of Cojimar, the fishing village by the sea in which the book was set. 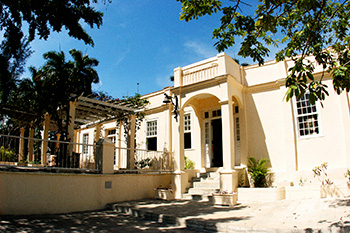 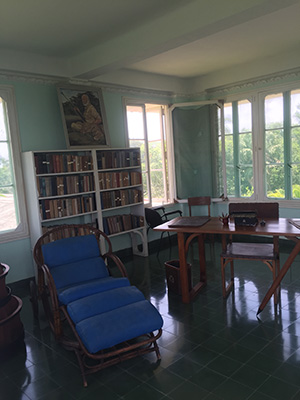 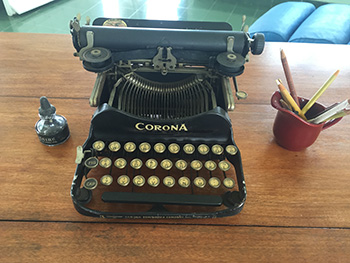 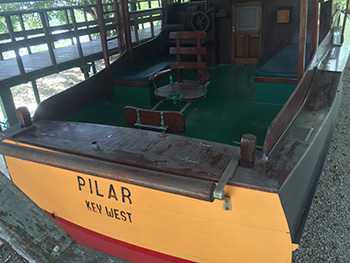 December 17 was secret and surprising. This showed how all past negotiations did not work and that “going big” was needed to make change.

There have been discussions going on quietly regarding climate, terrorism, health, and emergency preparedness – all areas where there can be some mutual agreement. President Obama said since 2004 that the embargo should be lifted. It is still early in negotiations regarding trade, embargo, telecommunications, visitation and travel. The banking discussion is difficult.

There are approximately 2 million remittances from Miami to Cuba and there will be much more in the future.

The future and change will take a long time and be difficult as there exists no template to follow.

There are many “good neighbor” issues i.e.  fishing, oil, clean water, hurricane coordination, drug trafficking (Cuba is a dropping point for goods), security of air traffic, civil aviation, trans-cultural ties, and baseball. The history of I Love Lucy is important.

Usually diplomatic relations are at the end, and not at the beginning of negotiations, but it will help to establish these now.

The people of Cuba are more prepared for change than the bureaucrats. Raul Castro represents the thinking of the Army and military, which appears willing to adapt – but it is bureaucrats who are the problem and the party apparatus. They don’t want to let go or change their lives.

Cuban generals have participated in wars which they won in Angola and Ethiopia. They have learned how to manage operations. They feel the current national security issue is really the bad economy, not foreign governments.

Venezuela was the first country Fidel Castro visited after the 1959 revolution. The Cuban Venezuelan relationship is deeper than politics. The Venezuelan President will be in the Soviet Union on May 9 for the annual celebration and parade.

Currently unification is a difficult problem, and a unification of exchange rates even more difficult. This may mean bankruptcy for some companies who do business in both currencies. The government will probably keep the Cuban peso.

We then had an early dinner at Papitos in the Barbershop Alley, the vision of local barber “Papito” Vallares. The alley contains a barbershop, hairdressing school, private businesses, as well as a playground.

It all started as an extremely successful barbershop, which pays tribute to the history of hairdressing. The equipment used in the Barbershop-chairs, scissors, mirrors, razors, etc-are all antiques and the walls were filled with beautiful original paintings by Cuban artists focused on hairdressing. It is no wonder that Vallares is considered to be Havana’s best hairdresser.

We ended the night by watching a dance performance by Lizt Alfonso Company at Teatro Marti, close to our hotel. We already had visited the Litz Alfonso Academy, so it was wonderful to watch the performance of those we had met earlier in the week. It was a spectacular presentation and we were all impressed by the talent.

The theatre, which was founded in 1884 and renovated starting in 2005, is considered to be one of the birth places of authentic Cuban bufo theater. It has only re-opened to the public recently after being closed for nearly 40 years. It was also the site of the original signing of the Cuban Constitution – which included the Platt Amendment. 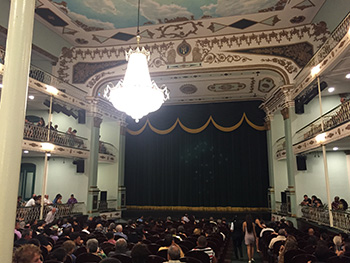 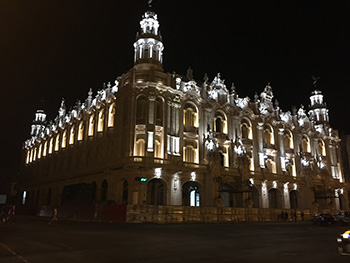