The morning began with a meeting at the Hotel Parque Central with Alain Bothorel, the head of the political-economic sector of the EU mission to Cuba. Bothorel has been 28 years with the EU.

Although the EU policy towards Cuba was previously largely restricted in efforts to spur reforms in human rights and democracy, the EU has gradually started lifting sanctions. Negotiations between Cuba and the EU to strengthen their relationship have been ongoing since 2014.

The EU is currently the largest foreign investor in Cuba and Cuba’s second largest trading partner.  In addition, a third of tourists to Cuba come from the EU (EU Parliament).

The EU negotations are very different than the US.  They don’t have the same practical issues as the U.S., and the EU is looking longer term and on a broader basis.  Trade issues are not at the top of their list. There have been three rounds of cooperation chapters. Issues include education, nuclear proliferation, research, trade, and some cooperation on human rights (which is the slowest). The EU will follow the same model.

Foreign companies have to go through the state, which authorizes Cubans to work for foreign entities. They offer staff, and the company has no choice but to accept the staff given. It is very difficult to fire employees. The employee is paid 75 percent of what the company pays and the remainder goes to the state.

The EU is interested in improving wages, and having freedom to assemble, freedom of expression–ideas that are different from government, media expression, prisoners rights, and economic rights.

They are just seeing virus and diseases in Havana for the first time, and the medical system which has always been top notch is seeing some cracks. There is also an increasing inequality in society.  The biggest difference is among those who have family in Miami and those who don’t.

Next – on our bus ride we learned more about Cuba.  North of Havana they are building a huge resort on the peninsula. There are already 40 hotels built. They concept is to have a triangle between Miami, the Bahamas and Cuba.  The homes along the beach are being torn down and people are displaced.

Regarding the education system – it begins at preschool, is compulsory until the ninth the grade, and is free through the graduate university level. Primary level uniforms are red and blue – with orange in secondary level. Brown uniforms are for trade school. If one doesn’t have grades for the universities, there are many trade school opportunities – including those related to tourism i.e. waiters.  If one attends the University then there is only one year required in the military. If one does not pass the university entrance exam then there are two years service in the military. The education system has been very good, but it slipping.

Now the Raul Castro Administration has a move to encourage students to learn about agriculture. However, the feeling is that there needs to be monetary incentives too. There is a lot of unused agricultural land.  An example is all the limes for cocktails are imported from Mexico, because they can’t incentivize farmers – so instead Mexican farmers are making a profit – and it is “against” Cuban government policy to make profits. The same is true with powder milk, which is imported from New Zealand.

The custom is to have two or three generations who live together. Often only one person is supporting the rest of the family.

In 1959 it was a crime to leave the island.  If you left Cuba and didn’t come back for one year you lost everything and could only come back for three months. This changed in 2013. This removed the need for an invitation letter, and lowered the cost of a passport from $400 to $40. Now you are allowed to be abroad for over two years, which allows people to make money – and the government hopes these people will come back. You can bring any amount of money in to Cuba; the issue is how much you can take out.  The government is always interested in having more money in Cuba, and as under the current system, some of the money will end up with the state.

An unofficial survey would say that that of the younger generation, 80 percent will leave or want to leave Cuba. 1999 was the last time Cubans used death penalty. 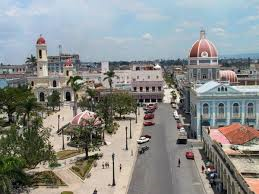 We then departed Havana and traveled approximately 160 miles to Cienfuegos, known as the Pearl of the South and the Paris of Cuba, according to the Lonely Planet. Cienfuegos has the only southern port (except Guantanamo).

It was a three lane highway built under the Batista regime in fairly decent shape. There were locals standing on the roadside selling food items. Located on the southern coast of Cuba, Cienfuegos is one of the main seaports of Cuba, and a major hub for sugar, coffee, and tobacco trade. Cienfuegos literally translates to “one hundred fires.” The views of the bay from the city were beautiful. Cienfuegos is one of the few cities in Cuba that contains both French and Spanish architecture. Founded by the French in 1819, this province has only 250,000 people. It is much cleaner than Havana, as it is easier to manage.

Once we arrived, we met with members of the Cienfuegos chapter of the National Union of Artists and Writers of Cuba (UNEAC). The UNEAC was founded in 1961 by Nicholas Guillen in order to maintain a genuine Cuban culture and not go in the direction of the Soviet model. Over 50 years later, the members continue to strive to preserve a true Cuban culture.  We enjoyed the opportunity to meet local authors, artists and photographers. A few members of the Union are members of the Communist Party, but most are not. They don’t want to be viewed as counter-revolutionary, as they do not receive foreign funding, nor do they wish to overthrow the government or use violence. They did indicate that with the growing tourism, there are more and more who are calling themselves artists, when in fact they really are in the realm of making handicrafts.

We then took a quick tour of Cienfuegos and had the opportunity to see the Palacio Del Valle, Punta Gorda, and the main square.

We continued to travel to the Punta Gorda, along the peninsula, lined by trees on the bay side and villas. It was the former “smart district” of Cienfuegos. 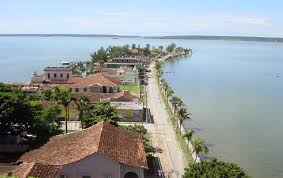 Before leaving Cienfuegos, we enjoyed a wonderful musical performance by a capella choir Canticus Novus. Here is a video of them singing. This is also one of the few private viewing opportunities. This choir works very hard, running from performance to performance, to make a decent living.

The performance was held at the Hotel Jagua which was built as a luxury hotel by an American company in 1958. It was immediately confiscated and opened for the public on January 1, 1959. 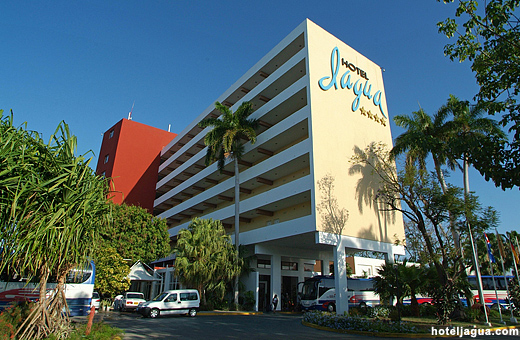 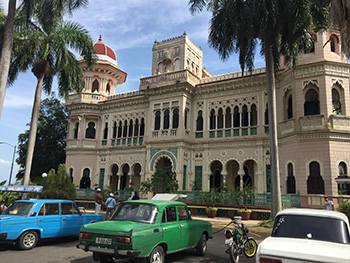 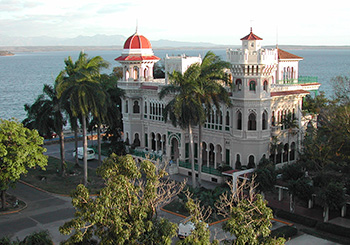 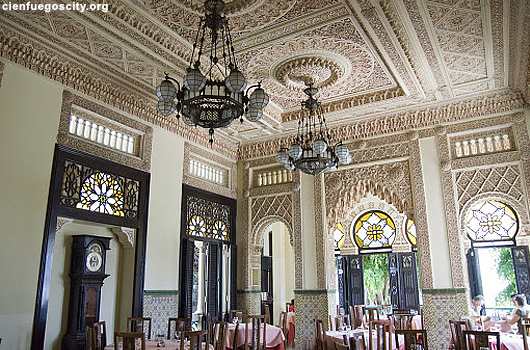 Following our quick visit to Cienfuegos, we then boarded the bus to Trinidad, which was approximately 50 miles away.  This was a two lane road with more than an occasional goat on the road, as well as many horse drawn carts.  The drive confirmed we were in a third world country. The latter half of the journey offered stunning views of the ocean. 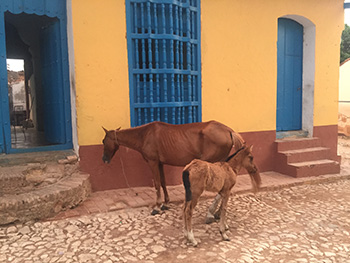 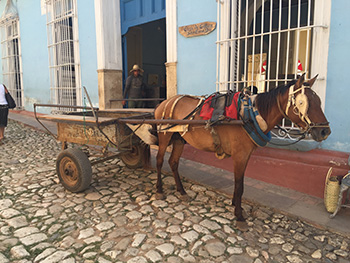 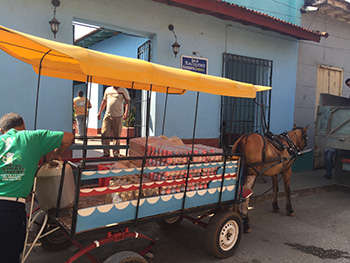 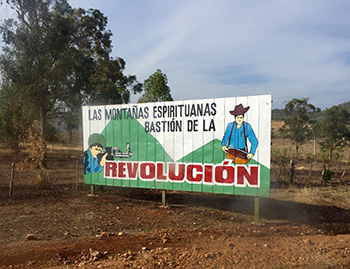 We checked into the Iberostar Grand Hotel Trinidad, with its pale green façade in the heart of the city. 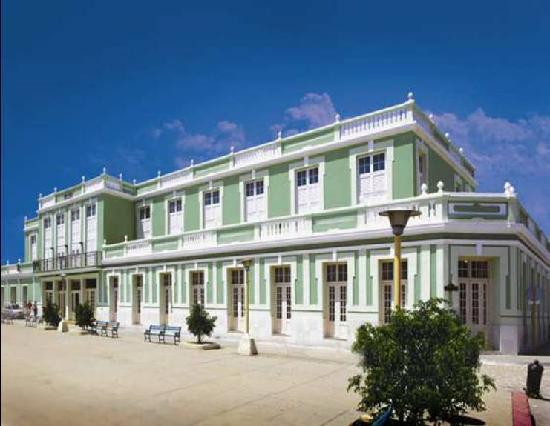 After checking in, we met for dinner at the lovely Los Conspiradores paladar. To reach our table, we walked through an art gallery on the ground floor, up the stairs to our table on the second floor balcony overlooking the main plaza of the city.  There was a local music group playing below. It is clear that music is a huge part of Cuban life. 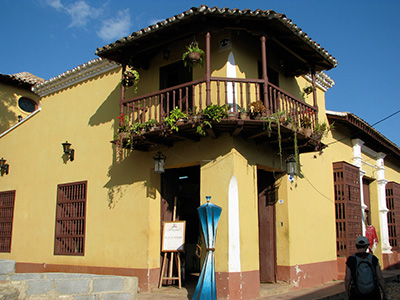 The owner and artist Yami Martinez’s work depicts the struggles and inequality of Cuban women, with many of her paintings featuring women with no faces or arms. Martinez used frying pans and coffeemakers as symbols of the role of women, who were still living in a male-dominated society.

Following dinner we visited the Casa de la Música, one of Cuba’s most popular live-music venues.