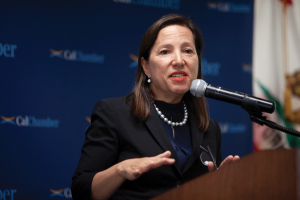 “We’ve seen the Lieutenant Governor in action over the last four years. Whether the occasion was one of the numerous online seminars and webinars during COVID, or the post-pandemic in-person events hosting delegations from all around the world, the Lieutenant Governor has been a gracious and energetic spokesperson. The California Chamber of Commerce was pleased to be part of the administration’s first international delegation to Mexico in October 2019.”

California is the world’s fifth largest economy with a gross state product (GSP) of more than $3 trillion. International-related commerce (including exports and imports of goods and services, plus investments) accounts for approximately one-quarter of the state’s economy. Although trade is a nationally determined policy issue, its impact on California is immense.

California exports to more than 226 foreign markets and accounts for almost 10% of the nation’s total exports. International trade, including exports and imports, supports more than 5 million California jobs — which translates to 1 in 4 jobs.

The California Chamber of Commerce looks forward to continuing joint endeavors alongside Lieutenant Governor Kounalakis to promote trade and investment opportunities in California and with our global partners.