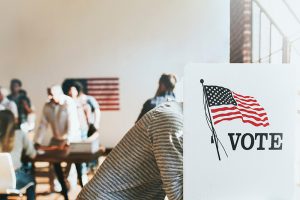 California’s General Election will be held tomorrow, with polls opening at 7 a.m. and closing at 8 p.m.

Registered voters in California were sent a ballot in the mail about a month ago, but voters may also choose to vote at a polling place instead. To be counted, mailed ballots must be postmarked by November 8 and county election officials must receive them by November 15.

At in-person voting locations, people may register to vote, drop off a mail-in ballot, obtain a replacement ballot, access voting machines, and get language assistance if needed.

California voters wishing to track their mailed ballots may register at https://www.sos.ca.gov/elections/ballot-status/wheres-my-ballot.

National early voting totals suggest that turnout at the General Election will be higher than 2018 turnout levels, which reached a 40-year high at 49% of the total voting-age population.

The United States Elections Project reveals that so far, Montana (31.1%), Georgia (30.6%) and Oregon (26.8%) are seeing the highest early voter turnout, relative to their total number of voting-age citizens as estimated by the U.S. Census. Meanwhile, as of November 6, about 19% of Californians have voted.

What’s on the California Ballot?

This year, Californians may vote on: