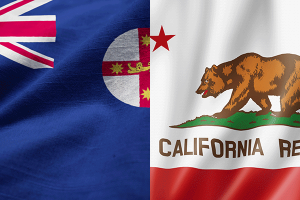 (June 29, 2021) Nearly 25 years ago, California and New South Wales, Australia declared themselves as sister states in light of their many social, economic and cultural ties.

Today, the similarities between California and New South Wales continue to form a strong bond, even as in-person gatherings gave way to virtual ones during the pandemic.

New South Wales and California remain the commercial, industrial and financial centers of Australia and the United States. Moreover, both states are leading centers for the production of wine, films, gold, and sports and leisure activities.

The early history of both states was dominated by mining and agriculture, as well as diverse and multicultural populations, and a Pacific Rim orientation. That history forms a solid foundation for activities today.

Further strengthening the California-New South Wales sister state relationship is the enduring mateship between Australia and the United States. Not only do the two nations share democratic values, but the ties linking them cover the entire spectrum of international relations — from commercial, cultural, and environmental contacts to political and defense cooperation.

Talent mobility has been another hallmark of U.S.-Australia relations. Since the U.S.-Australia Free Trade Agreement came into effect in 2005, thousands of talented Australians — many still based in California — have come to the United States to work under a special visa.

Australia, the 16th largest export destination for the United States, has a market economy with a gross domestic product (GDP) of $1.39 trillion and a population of 25.36 million, according to the World Bank.

In 2020, Australia was the 14th largest importer of California goods and services. Of the $3.2 billion of California exports to Australia, transportation equipment (17.7%) and computers and electronic products (16.3%) were the two largest categories. Other top export categories included chemicals and food manufactures.

Of the $2.2 billion in California imports from Australia, the top categories were food manufactures and primary metal manufactures.

In keeping with longstanding policy, the California Chamber of Commerce enthusiastically supports free trade worldwide, expansion of international trade and investment, fair and equitable market access for California products abroad and elimination of disincentives that impede the international competitiveness of California business.