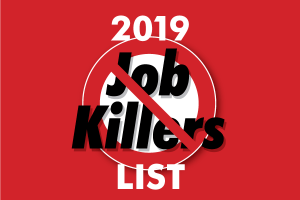 The fate of 12 bills identified by the California Chamber of Commerce as job killers depends on decisions today by fiscal committees in the Assembly and Senate.

The Assembly and Senate Appropriations committees face lengthy agendas as they consider bills previously sent to the suspense file pending a review of the legislation’s fiscal impact.

Tomorrow is the deadline for appropriations committees to send bills along for consideration by the entire Assembly or Senate.

On the Assembly Appropriations Committee Suspense File are:

The following bills are on the Senate Appropriations Committee Suspense File: