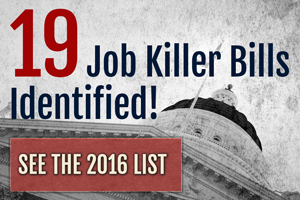 The California Chamber of Commerce today added a targeted tax to its job killer list, bringing the total number of bills on the list to 19. The latest bill, AB 2782 (Bloom; D-Santa Monica), will be considered by the Assembly Health Committee this afternoon.

AB 2782 threatens jobs in the beverage, retail and restaurant industries by arbitrarily and unfairly targeting certain beverages for a new tax in order to fund health programs. To the extent AB 2782 has its intended effect of reducing consumption, employers engaged in the production, distribution, retail, and restaurant industry will have to mitigate that loss through reduction of costs in other areas, including labor.

Although the bill describes the amounts collected as a “health impact fee,” the revenues are a tax that would be used to fund the Healthy California Fund. That fund provides various departments with the authority to invest in prevention programs and activities to address diabetes, obesity, heart disease, and dental disease.

As CalChamber’s opposition letter explains: “imposing a targeted tax on one industry to address a statewide problem that is created due to numerous different issues unrelated to sweetened beverages, will have significant consequences.”

The letter points out that the targeted tax will certainly be passed on to consumers through higher prices.

Another concern is the creation of additional state programs that may ultimately rely on General Fund revenue in order to survive. If, as intended, AB 2782 deters consumers from buying sweetened beverages, the excise tax will be a decreasing revenue source and there could be more pressure to use the General Fund to replace the funding for the programs the bill creates.

The business community consistently maintains that if a tax is necessary, it should be only temporary and broad-based so that the impact is minimized as the tax burden is shared by all instead of an individual business or industry.

Extending CalCompetes Is Key to Job Growth and State-Wide Investments