Today we received a briefing at Intel’s Development Center in Haifa.

Haifa is the third largest city in Israel with a population of 279,591. Immigrants from the former Soviet Union make up 25% of the population. Haifa is home to the Bahá’í World Center, an UNESCO World Heritage Site. The earliest settlement in Haifa traces back to the 14th century BCE and has since been ruled by several different conquerors. Haifa is home to a major seaport on Israel’s Mediterranean coastline, and is a center of heavy industry, petroleum refining and chemical processing. Haifa is considered a relative haven for coexistence between Jews and Arabs. The city plays an important role in Israel’s economy as it is home to Matam, one of the oldest and largest high-tech parks in the country. Matam, founded in the 1970s, is an international technology center with some of the world’s leading hi-tech companies.

Intel was first established in Israel in 1974, with four major sites in the country. Intel is the largest private sector employer in Israel with 10,200 and indirectly supports the employment of 30,000 others in Israel. Intel is also Israel’s largest private exporter. This year Intel purchased Mobileye, an Israeli smart car start-up for US $15 billion. Intel is unusual in Israel as it is both an R&D company and a manufacturer. The site we visited is located at Mt Carmel. Intel has invested $11 billion in Israel since it first arrived and has plans to invest another $6 billion in the next several years. The company is also heavily involved in the Israeli community, with 42% of employees spending time volunteering. They have collaborated with schools, municipalities, and community organizations on a range of initiatives and donated 23 million new Israeli Shekels (NIS) just in 2015.

Next stop in Haifa was a visit to the Technion, the Israel Institute of Technology, one of the world’s top universities. The Technion is a public research university in Haifa that was established in 1912 under the Ottoman Empire. It is the oldest university in the country and has become a global pioneer in the fields of biotechnology, stem cells, space, computer science, nanotechnology, and energy.

We then had lunch in Nazareth.

In the afternoon we had a brief tour of Nazareth. Nazareth is the capital city of the Northern District of Israel, about 67 miles from Tel Aviv, and is known as the Arab capital of Israel. It has a population of just over 75,000, with about 70% who are Muslim and 30% who are Christian.

In the New Testament, Nazareth is described as the childhood home of Jesus, and is therefore a center of Christian pilgrimage. While in Nazareth, we visited the nearby Church of the Annunciation. This is the site where it is said in Roman Catholic tradition that the angel Gabriel appeared to the Virgin Mary and announced that she would conceive and bear Jesus, the Son of God. The current church was constructed over the site in 1969. Inside the church, the lower level contains the Grotto of the Annunciation, believed to be the remains of the original childhood home of Mary. 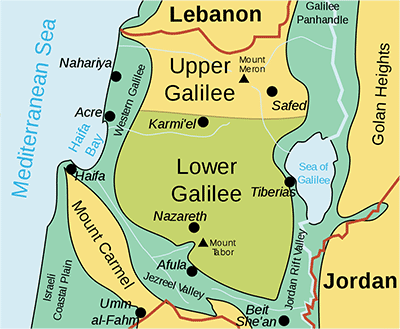 Near Nazareth is the Sea of Galilee. Three quarters of the activity of Jesus recorded in the New Testament took place on, around, or within sight of the Sea of Galilee. The lake has historically provided the Jewish towns and villages on its shores with a source of fresh water, a fishing industry, and a means of transportation.

In Nazareth we also had the opportunity to go to the Arab Market, which attracts Israelis from across the country looking for traditional Arabic produce. There were stalls and narrow alleyways that were filled with the smell of Arab spices.

After exploring Nazareth, we boarded the bus to return to the Tel Aviv to attend a reception at the Residence of the US Ambassador.

The U.S. Ambassador to Israel, David Melech Friedman, was the first bilateral ambassador confirmed in the Trump Administration. Ambassador Friedman, a nationally-ranked attorney, has played a lead role in negotiating multilateral disputes in some of the nation’s most complex business and financial restructurings.