Our chamber delegation met in the lobby of the hotel bright and early and headed to the ancient fortification of Masada, a little over a two-hour drive away from Tel Aviv. On the way we saw Jewish, Palestinian and Bedouin settlements. Some Bedouins have become more permanently settled and integrated, but many have not. These nomadic tribes are often uneducated and on the low end of the socio-economic scale.

Masada is a rugged natural fortress in the Judean Desert overlooking the Dead Sea. Masada is the symbol of the ancient kingdom of Israel, and its violent destruction during the last stand of Jewish rebels in the face of the Roman army in 73 A.D. It was built as a palace complex by Herod the Great, in the classic style of the early Roman Empire. The camps, fortifications, and attack ramp that encircle the monument constitute the most complete Roman siege works surviving to the present day. Masada was declared an UNESCO World Heritage Site in 2001.

In today’s world there are three ways up to the top of Masada; the Snake Path which is a long climb up and the way the Jews would have used; taking the Roman Rampart route, which still involves climbing; or the more convenient and expeditious method of a modern day gondola. Masada has now become and an international tourist attraction with bus loads visiting every day.

This mountain top has great meaning for the Jewish people, and often members of the Israeli Army will climb to the top. I was happy to have seen the movie Masada a few years ago to help me visualize and understand this important story. 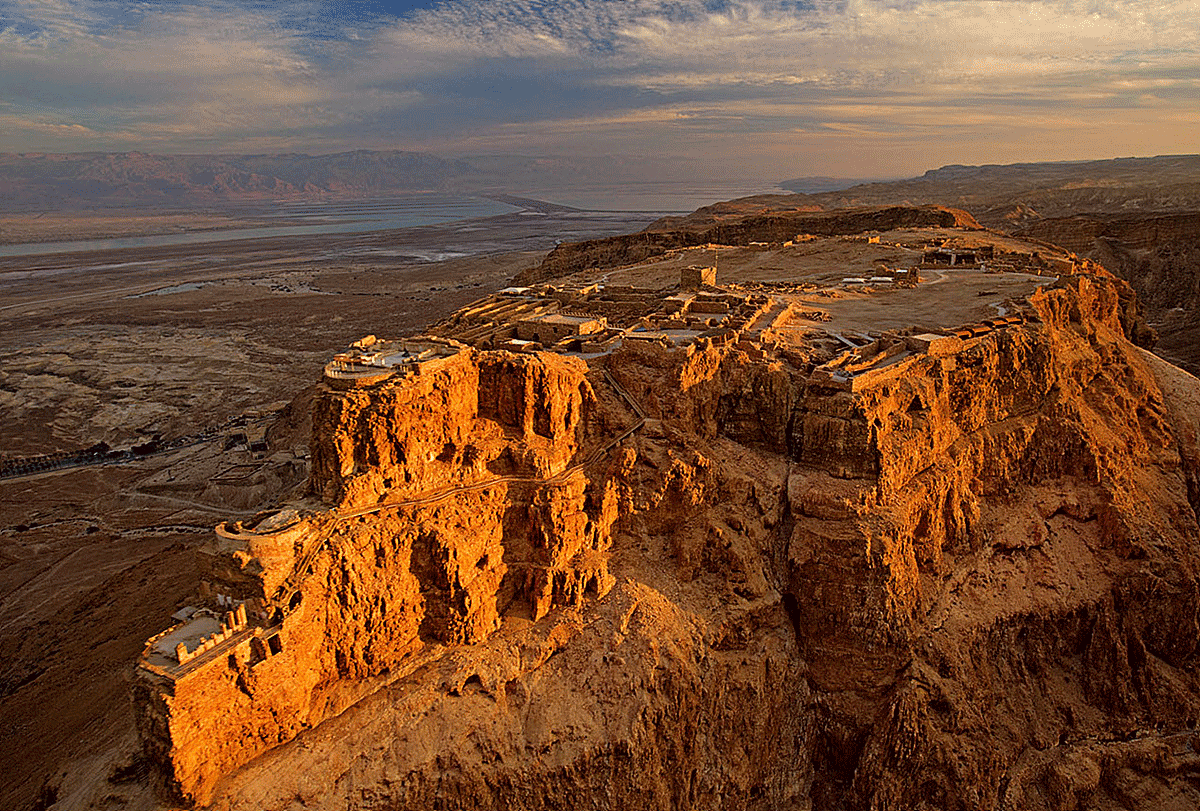 After the breathtaking views of Masada, the group headed to the Dead Sea for lunch and a swim. The Dead Sea borders Israel, the West Bank, and Jordan. It is a salt lake, whose banks are more than 1,412 feet below sea level, the lowest point on dry land. The famous hypersaline water, 9.6 times as salty as the ocean to be exact, makes floating easy. The salinity creates a harsh environment in which plants and animals cannot flourish, hence the name – the Dead Sea. The lake’s mineral-rich black mud is used for therapeutic and cosmetic treatments at resorts in the area.

There are a few small communities near the Dead Sea as well as several international hotels, in fact it was one of the world’s first health resorts having been used by Herod the Great. It has since become a major center for health research and treatment not only because of the high mineral content of the water, but the low content of pollens and other allergens in the atmosphere, reduced ultraviolet component of solar radiation, and the higher atmospheric pressure being at the lowest point on Earth. In the early 20th century, chemists deduced that the sea was a natural deposit of potash (potassium chloride) and bromine.

The mineral industry has been producing wealth for Israel and Jordan since the early 20th century. Israeli companies generate around $3 billion annually from the sale of the minerals. However, Palestine has been unable to benefit from the lucrative minerals due to restricted access, permit issues, and the investment climate. Unfortunately, environmental concerns have grown recently, as the Dead Sea has been rapidly shrinking because of diversion of incoming water from the Jordan River in the north. Projects are currently underway to restore the water levels and environment of the Dead Sea.

Swimming in the Dead Sea was an usual experience, as one truly floats to the pint where one has to work to get your feet under you.

The Welcome Dinner brought together the entire delegation with leaders from the U.S. Chamber’s Israel partner organization, the Israel-American Chamber of Commerce (AmCham Israel).

The dinner was at a restaurant called The Old Man and the Sea, named after Hemingway’s novel. We were presented with a feast of seafood and fish along the Port of Jaffa.

After dinner, it was time to get all the rest we could before another full day of experiencing everything Israel has to offer. Our hotel, the David InterContinental Hotel, is a modern high-rise hotel with incredible views of the Mediterranean Sea.