We left the hotel bright and early to head for Jerusalem. 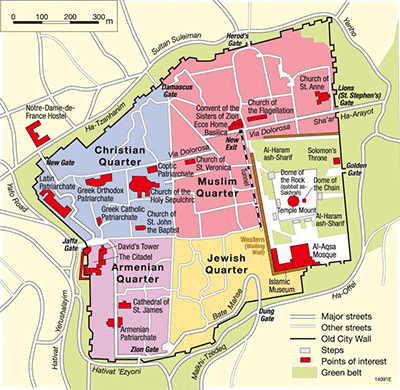 We took a tour of Jerusalem’s Old City, a walled area made up of only 0.35 square miles. It is the heart of Judaism, Christianity, and Islam, and is the center of Jerusalem. The city is home to some of the holiest and most significant sites in each region. The Western Wall, also known as the Wailing Wall or Kotel in Hebrew, is the last remaining wall of what was the Jewish temple. Above the Western Wall is the Dome of the Rock, which is recognized by Muslims as the site where the prophet Muhammad rose to heaven. Nearby is the Church of the Sepulcher, where Christians believe Jesus was crucified and buried.

The Old City is divided into four quarters, each with its own unique atmosphere: the Jewish quarter, the Armenian quarter, the Christian quarter, and the Muslim quarter. We followed the Byzantine Cardo through the Jewish Quarter. The Cardo was the main street in ancient Roman cities, it ran from north to south and was lined with a row of columns on each side. Parts of the Cardo are dated to the 6th century A.D.

We visited the Western Wall, which is the retaining wall for the western side of the Temple of the Mount which was destroyed by the Romans more than 2,000 years ago. It is the holiest place of prayer in Jewish tradition. The wall is separated into two sections, one for men and a smaller one for women. The wall is open 24 hours a day, and pictures are allowed at the wall from outside a fenced enclosure, except during Shabbat. For men, if you don’t have a yarmulke, a box of paper ones is provided at the entrance. There are papers stuck between the stones of the wall, these are called kvitlach, or messages and prayers that people write and put in the wall hoping that they will be answered. 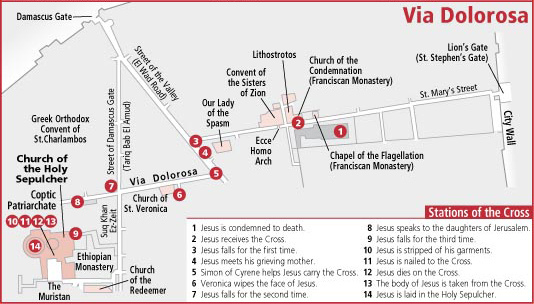 The Church of the Holy Sepulcher

The Church was originally constructed in the 4th century to mark the location of the crucifixion, however it was destroyed and built several times over and the building standing today dates to the 12th century. The Church is guarded by different denominations of Christianity including Greek Orthodox, Roman Catholics, Armenians, and Copts. As can be expected where so many differing views convene, there has been some disputes between the different denominations, the Israeli government has largely left these disputes to the communities to resolve only intervening to restore the Church when emergency repairs are needed.

After exploring Jerusalem all morning, we had  the opportunity to meet the mayor of the ancient city, Nir Barkat. Mr. Barkat assumed the office in 2008 and was re-elected in 2013. He has worked to preserve the rich culture of the city with a message of respect and pluralism for its many residents. Mr. Barkat, himself, was formerly a tech entrepreneur as well as a Major in IDF. He spoke to us about his role as mayor for the city of Jerusalem. Mayor Barkat has increased the municipal budget by an average of 10% each year in office, spurring dramatic growth in employment, investment in infrastructure, and cultural development. Accordingly, Jerusalem has become a national leader in resident satisfaction, youth engagement, and Zionist sector enlistment in the IDF. Mayor Barkat has already begun to develop plans for large scale public‐private‐partnerships, and has set a goal of ten million tourists annually by 2020.

It is understood there are five key positions in Israeli politics: the Prime Minister, the Foreign Affairs, Defense and Finance Ministers – and the Mayor of Jerusalem.

For lunch we went to Ima, in Jerusalem. Ima meaning mom, is appropriately named as the restaurant is owned by a Kurdish-Jewish mother and has been operating for over 36 years.

After lunch we visited Yad Vashem, the World Holocaust Remembrance Center, the ultimate source for Holocaust education, documentation, and research. The center uses an integrated approach and inspirational exhibits along with innovative technological platforms to maximize accessibility to the vast information in the Yad Vashem archives for all audiences. Yad Vashem is at the forefront of efforts to safeguard the memory of the victims of the Holocaust, to document one of the darkest chapters in human history accurately, and to effectively keep the memory of the Holocaust alive and relevant today and for future generations amidst challenges.

The Remembrance Center was a beautiful and moving tribute to the victims of the Holocaust.

Then we had the opportunity to take a tour of The Knesset, Israel’s unicameral parliament.

Israel’s government is based on a parliamentary democracy. The Prime Minister is the head of the government and the leader of a multi-party system. There are three branches of government, the executive, the legislative called the Knesset, and the judiciary. Israel does not have a written constitution, but it does have 11 Basic Laws which are set to be codified into a future written Israeli constitution, but this has been postponed since 1950 with no clear future date of incorporation. The Knesset is the unicameral national legislature of Israel; it passes all laws, elects the President and the Prime Minister, approves the cabinet, and supervises the work of the government. The Knesset took its name and fixed its membership at 120 from the Knesset Hagedolah (Great Assembly), the representative Jewish council convened in Jerusalem in the 5th century BCE. The President of Israel is a ceremonial figurehead and then selects the Prime Minister, who exercises executive power. The prime minister is chosen by the number of parliament seats their coalition has won.

At the Knesset we learned more about economic and political issues currently facing the Israeli parliament.

After a day of learning about the ancient and modern histories of the land and its people, we had the opportunity to have dinner in Jerusalem at the home of Chef Ruth Yudekovitz. Ruth, after running a successful local design firm, began taking tourists on adventures through the market and then bringing them back into her home to teach them how to create local delicacies, calling it the shuk and cook. The shuk is the name of the local market which has been a hub of commercial activity from the time of the Ottoman Empire.