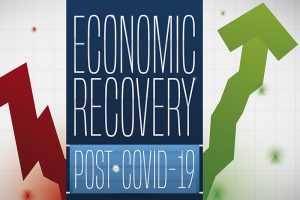 The enduring lesson for policy makers as California recovers from the Pandemic Era should be restraint. California enjoys a bountiful budget surplus, but nobody should fool themselves that it lasts forever.

Often through no fault of their own, elected leaders and government officials missed or misinterpreted the trends since 2020 that should normally inform wise public policy. Unpredictability became the regular order of business:

Governor Newsom paid his respects to uncertainty when he released his proposed budget for the 2022-23 fiscal year. Faced with a second consecutive year of budget surpluses, he allocated 86% of the projected $46 billion surplus not dedicated to schools to one-time investments, such as debt repayment, retirement system liabilities, infrastructure, and tax relief. These policy choices contrast with the preferences in past decades to spend nonrecurring capital gains windfalls on ongoing (programs or entitlements, ratcheting up state budgets using unsustainable revenues. When the inevitable business cycle turned, as it has in recent recessions, elected leaders faced the unhappy scenario of cutting popular programs, raising taxes, or engaging in borrowing or budget tricks.

The remaining political risk to the California economy and jobs climate lies with a legislative agenda that often sets aside the lessons of uncertainty. Or put another way, many legislators behaving as if it was business-as-usual.

California’s economy is massive, diverse and resilient. That’s why the state treasury is overflowing with revenues. California employers, entrepreneurs and small businesses found a way in the teeth of the pandemic, intense international competition and pernicious state regulations and mandates to grow their businesses, profits and tax payments.

But signs of weakness continue to manifest, most troublingly the continuing exodus of middle-class workers to other states, without the foreign immigration to cushion that exodus. 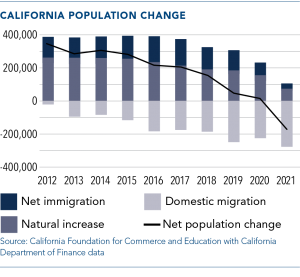 Last year, with continuing fertility declines and increased deaths from aging and the pandemic, California actually lost population. But most significantly, since 2011, California has suffered net domestic outmigration, and since 2015, this domestic outmigration has exceeded international migration. While net international migration added population since 2015, negative domestic net migration overwhelmed these gains, resulting in an overall net migration loss of nearly 600,000 residents.

Which brings us back to public policy. With middle class and working Californians already anxious about crime, homelessness and affordability, the Legislature should think twice about their increasingly ambitious plans to remake California’s economy and social contract. Instead, elected leaders should:

California retains significant competitive advantages as a place to create or grow a business. Employers, alongside many elected and community leaders, toil diligently to make California home for their enterprises. But the uncertainty of the new, post-pandemic normal demands policy makers take even more care to not disrupt recovery with thoughtless and burdensome legislation and regulations.