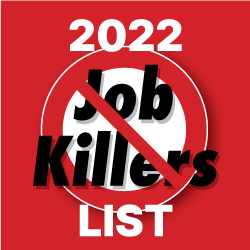 A few CalChamber-identified Job Killer bills, including AB 1400 (Kalra, Lee and Santiago), creating a single payer health care system, are on the move in the Legislature.

AB 1400 passed the Assembly Appropriations Committee on Thursday with amendments and has moved to the Assembly floor for a vote. The bill must be voted on and passed by the full Assembly by January 31 in order to stay alive. CalChamber is leading a coalition of more than 120 organizations to oppose AB 1400 and ACA 11 (Kalra and Lee), which together would create and finance a new single payer health care system called CalCare, raising taxes exorbitantly.

CalChamber Policy Advocate Preston Young, who is leading the coalition, has stated that the taxes needed to fund single payer health care, as outlined in AB 1400’s companion bill, ACA 11, will significantly impact nearly all California employers. Previous analyses of a single-payer system estimated it would cost at least $400 billion a year, but many contend that estimate is low. According to the Tax Foundation, ACA 11 would increase taxes by $12,250 per household annually.

AB 1192 places new onerous administrative burdens on employers by requiring annual public reporting of wage and hour data, and employees’ benefits (including benefits that are not required by law), on an employer’s entire U.S. workforce. This would publicly shame employers for lawful conduct by publishing the data on the Labor and Workforce Development Agency’s website and subjecting employers to frivolous litigation and settlement demands. Reporting mandates already exist that do not subject employers to such public shaming. A similar bill was vetoed in 2017 by Governor Edmund G. Brown Jr., who worried that data could be “exploited to encourage more litigation than pay equity.”

SB 213 significantly increases workers’ compensation costs for public and private hospitals by presuming certain diseases and injuries are caused by the workplace. This establishes an extremely concerning precedent for expanding presumptions into the private sector.

Presumptions of industrial causation for specific employees and injury types create a tiered system of benefits that treats employees differently based on occupation and undermines the credibility and consistency of the workers’ compensation system. The bill also creates a special standard under which hospital employees can file a workers’ compensation claim after leaving employment for up to 3, 5, or 10 years based on the injury. SB 213 sets a troubling precedent and represents a drastic shift in law.

AB 1119 would have imposed new burdens on employers to accommodate any employee with family responsibilities. This essentially would have included a new, uncapped protected leave for employees to request time off and exposed employers to costly litigation under the Fair Employment and Housing Act. This could have allowed any adverse employment action to be related to the employee’s family responsibilities, rather than an actual violation of employment policies.

AB 95 would have imposed a significant new burden on employers of every size by mandating that they provide employees up to 10 days of bereavement leave upon the death of a spouse, child, parent, sibling, grandparent, grandchild, or domestic partner, regardless of how long the employee had worked for the employer. The bill also would have opened up new avenues for litigation against California employers by establishing a brand-new private right of action.