This article was written by Jesse Newman and first appeared in The Wall Street Journal. 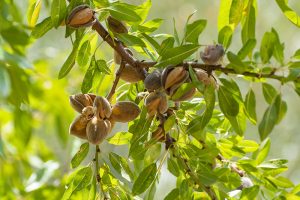 As another severe drought takes its toll in California, some farmers are backing away from one of their most profitable crops: almonds.

For years the nuts have been one of California’s star crops, exported in bulk and used in food products throughout the supermarket. Now, farmers in parched parts of the state are bulldozing thousands of acres’ worth of almond orchards that cannot be irrigated, and dropping plans to plant more as they confront what farmers say could be a hotter, drier future.

The drought, which began last year, has spread across nearly all of the western U.S. Combined with looming restrictions on groundwater usage, it is prompting a reckoning in California’s $6 billion almond industry, which grows about 80% of the world’s supply. The situation is reshaping the state’s food sector, forcing farmers to reassess which crops they will have the water to produce, and where. It is also challenging food-company executives tasked with keeping grocery store shelves filled when reservoirs or wells run dry.

Mark Jansen, chief executive of Blue Diamond Growers, said: “We foresee an end of the unconstrained growth in almond supply.”

With no water flowing from canals to his Huron, Calif., farm, Jim Anderson in February opted not to plant 6,000 acres he typically devotes to crops like garlic and carrots. Instead, he sent groundwater from his wells to his almonds, which represent decades of investment. Still short of water, Mr. Anderson pulled out 400 acres of almonds in April.

“We’re grinding up trees as we speak.” Mr. Anderson said. “Beautiful orchards that could’ve lasted another five or six years.”

Drought has long been a fact of life for California farmers. But the current one came on fast, and not long after the previous one ended. Meteorologists’ predictions of more frequent and deeper dry periods are rattling growers who already are facing cutbacks in their water allotments and limits on groundwater pumping.

These pressures could force crop producers to fallow between half a million and one million acres of farmland in California’s San Joaquin Valley in the next two to three decades, according to estimates from academics and think tanks in the state. Crops like rice and cotton already have seen steep declines in plantings this year.

Richard Waycott, chief executive of the Almond Board of California, said almonds likely will remain a preferred crop for many farmers. Acreage already has begun migrating north to more water-secure parts of the state. Almonds could replace other crops able to thrive in places beyond California, he said, as demand for the nuts and their profits for farmers keep the industry growing even if fewer acres are planted there.

“World-wide demand certainly isn’t satiated,” Mr. Waycott said, adding that advances in irrigation technology and orchard management are helping farmers stretch their water further. Almonds are a thirsty crop. One acre of mature trees requires roughly 1.3 million gallons of water a year. That is less than rice or alfalfa, similar to other nut trees, and twice the amount of vegetables like lettuce and broccoli.

U.S. almond production has boomed as farmers flocked to the high-value crop with a mechanized harvest, considered perfectly suited to California’s climate. Last year farmers produced a record 3.1 billion pounds of almonds using the most acres ever, according to U.S. Department of Agriculture data.

Blue Diamond, a century-old grower-owned cooperative, has reaped the benefits of the almond bonanza. The coop has grown into the world’s largest almond processing and marketing company with sales last year totaling $1.6 billion, more than double the previous decade. Grocery sales of Almond Breeze, the company’s most profitable product, topped $800 million last year.

If history is any guide, Blue Diamond’s Mr. Jansen said, California’s current drought will curb almond yields, reduce supplies and drive prices higher in years to come. Prices growers received for their nuts hit a record $4 per pound during the previous drought, before falling to the lowest in more than a decade last year.

Dino Giacomazzi is trying to make the math work. In a year when the U.S. Bureau of Reclamation has cut water allocations for many California farmers to zero, he is still receiving a quarter of his normal amount, and can pump enough groundwater to keep his almond orchards intact. But the drought, combined with expectations that he will be able to draw less from his wells in the future, has prompted him to scale back plans to plant more almonds by 30%.

“I think the almond market in California has peaked,” said Mr. Giacomazzi, who bet big on the nuts when he began shifting his family’s 120-year-old dairy farm into almonds in 2013. He said he will leave some of his acres in wheat and alfalfa, land he can fallow in dry years in order to shift water toward his almond orchards.

California’s previous drought, which ran from 2012 to 2016, tighter almond supplies prompted Blue Diamond to shut its almond butter business to divert its nuts to more profitable products like milk. This time, Mr. Jansen said he anticipates the company will reduce the volume of nuts it exports in bulk to countries like India and China to ensure adequate supplies for its own products and packaged food customers.

The company last year invested in a digital platform to measure its members’ water resources and help plan for future dry spells.

Stuart Woolf’s family has grown almonds in California for 50 years and runs a major almond processor in the state. He has been slowly shifting his almond acreage north, this year pulling out 400 acres of trees at his home ranch further south and fallowing 40% of his row crop acreage to keep his remaining orchards there.

Mr. Woolf said he is now looking at new lines of business, including launching an orchard removal business to help farmers seeking to dig up trees in favor of using their land for conservation programs. He is also considering investing in orchards in Portugal, where he says water availability is a surer bet.