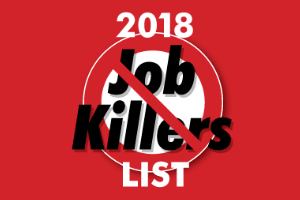 The California Chamber of Commerce today added three more bills to its job killer list, bringing the total number of job killers to 24.

AB 2447 (Reyes; D-Grand Terrace).  This bill would force state entities to weigh discrimination factors when deciding whether to certify an environmental impact report for a project.

CalChamber has identified this as a job killer because it invites more litigation from project opponents, who will exploit the subjective nature of any finding that a person is being discriminated against, to kill projects they do not like or want, thus increasing the complexity and cost of complying with the California Environmental Quality Act (CEQA). According to CalChamber’s letter, at a time when California is already experiencing unprecedented CEQA litigation and delays in the construction of much needed housing and other land use projects, a bill attracting more CEQA abuse is the last thing Californians need.

AB 2447 is scheduled to be heard in Assembly Natural Resources Committee on April 16.

AB 2560 (Thurmond; D-Richmond).  If passed, this bill would impose a tax of up to 10% on contractors for the privilege of doing business with the state Department of Corrections and Rehabilitation to fund preschool and after school programs.

CalChamber has identified this as a job killer because the unduly burdensome tax structure built into contracting with the Department of Corrections will ultimately result in a loss to the state of qualified and competitive bidders, as well as a loss of business to the vendors that the state has come to rely on as quality and dependable.

AB 2560 is scheduled to be heard in the Assembly Revenue and Taxation Committee on April 16.

According to CalChamber’s bill letter, AB 3087 fails to take into account the major causes of rising medical care costs. Simply capping the rates will not make the costs in the health care system disappear, but instead will limit choices, access, and in the long term, increase costs for employers and their employees.

The Assembly Health Committee is scheduled to consider AB 3087 on April 24.

Extending CalCompetes Is Key to Job Growth and State-Wide Investments